Steve Spurrier is the heart and soul of the Florida Gators. He has a statue outside of Ben Hill Griffin Stadium. The field itself is named in his honor. The Head Ball Coach's name may as well be synonymous with the University of Florida.

Spurrier is easily UF's all-time greatest head coach. He left the Duke Blue Devils and headed to Gainesville in 1990, beginning a masterful 12-year tenure that produces some amazing games against Bobby Bowden's Seminoles. The visor-wearing, quick-witted coach won 122 games in that span, won six SEC championships and brought home the school's first ever national championship over Florida State in 1996.

Even after stints coaching the NFL's Washington Redskins and South Carolina Gamecocks, Spurrier returned to the place he dedicated much of his life to in an advisor role. The man just couldn't stay away.

Spurrier is revered in The Swamp because he helped build it. Back in 1963, the talented passer out of Science Hill High School in Johnson City, Tennessee, joined coach Ray Graves' college football program in Gainesville and spent the next four years turning it into a competitive team in the SEC as a two-time All-American. It wasn't until 1966 that Steve Spurrier became a player of national prominence when he won the Heisman Trophy.

50 Years Ago: Florida spends $10,000 to mail out highlight tapes of QB Steve Spurrier to Heisman voters. He wins. pic.twitter.com/aA2frHUklv

Spurrier was a gifted passer in his heyday, and he may not have displayed that more than when he led the Gators to a highly controversial win over the Florida State Seminoles in 1966. How fitting for a school he once called "Free Shoes University."

Florida and Florida State's storied rivalry is littered with fights, moments and plays that have turned it into one of the greatest annual meetings in college football. The bitterness and hatred these two teams and fan bases feel may have begun in Tallahassee on October 8, 1966, however.

The Gators were expected to stomp the 'Noles, but that didn't happen. FSU limited UF's rushing attack to less than 100 yards, meaning senior Steve Spurrier would have to throw for much of the day.

Spurrier absolutely shined, throwing three touchdown passes in Florida's 22-19 victory. Old footage of the game gives fans a glimpse as to what Spurrier was like as a player. It also shows how different the game (as well as the stadium, fans and scoreboard) looked back then. 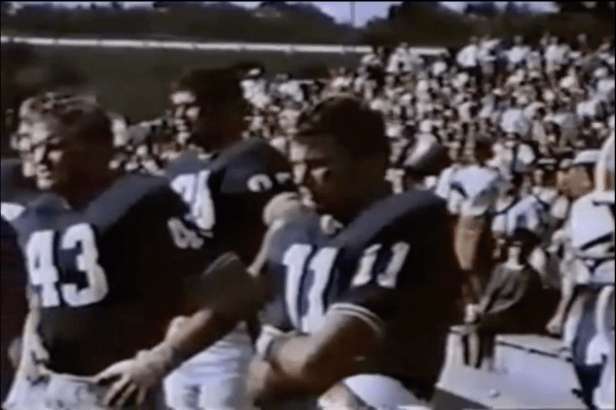 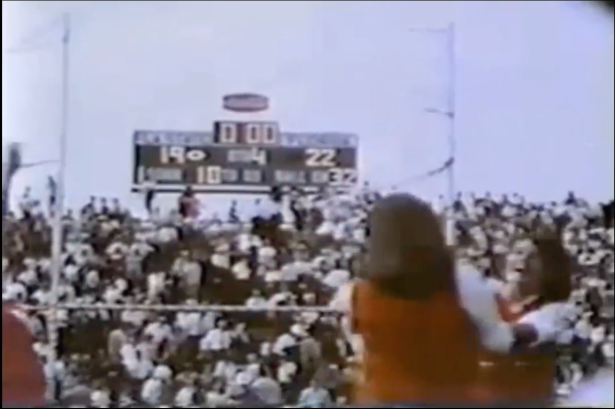 In the video below, Spurrier rolls out to his left before firing a strike to his receiver. I've sped it up to the 12:52 mark where he scores his second touchdown:

No pass may have been bigger than when Spurrier dropped back and found his wide-open target for what wound up being the game-winner in the fourth quarter. The 22:25 mark shows this:

RELATED: Steve Spurrier's Net Worth: How the Head Ball Coach Made His Millions

If you ask Florida State fans who remember this game, though, they'll tell you the real star of this clash was the referee.

If the refs don't cheat Lane Fenner and FSU out of this game winning TD call, Spurrier loses the Heisman & the game in '66 #FSUvsUF pic.twitter.com/uqRO3ofypX

FSU was trailing by three when quarterback Gary Pajcic heaved a pass down the sideline for Lane Fenner. The home crowd erupted for what they thought was a touchdown.

By the time the referee came running down the sideline, he already made up his mind: Fenner caught the ball out of bounds. No touchdown. Florida State couldn't challenge the play and ended up losing on a missed field goal that fell wide right. Pictures from Fenner's "no catch" surfaced afterward and sure as heck made it look like he was in bounds.

"Sour grapes is one thing, but visible, black-and-white, living proof is another. Pictures on page one of this issue show in vivid, better detail that Lane Fenner caught the 55-yd. Gary Pajcic pass with both feet in bounds in the everlovin' end zone."

The debate was never really settled. Even Florida State's 2014 football media guide listed that year's score as 26-22 in favor of the 'Noles. Officially, though, Florida won.

Regardless of the outcome, Spurrier's big day was only a sliver of his Heisman campaign. The Gators lost just two games to the Georgia Bulldogs and Miami Hurricanes, finishing the regular season at 8-2 before an Orange Bowl win over Georgia Tech. Spurrier won the Heisman Trophy after throwing 2,012 passing yards, 16 touchdowns and eight interceptions.

Just don't forget that Spurrier was a pretty darn good football player before he became the Head Ball Coach.