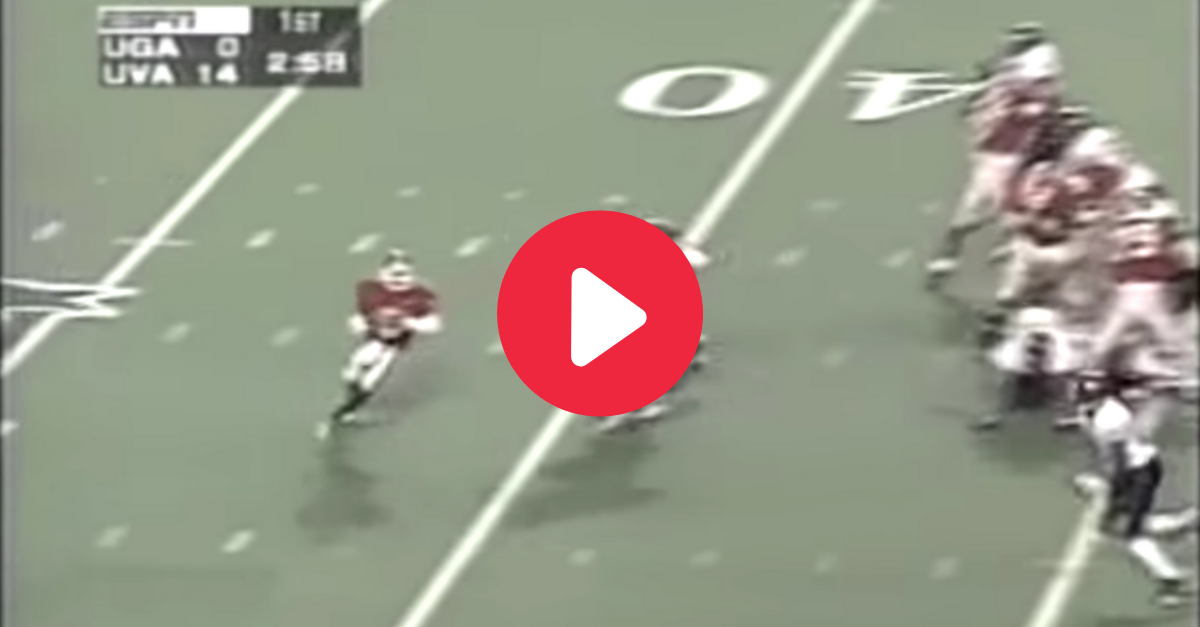 Two-way athletes are exciting as hell. Babe Ruth, the best baseball player of all time, dominated at the plate and on the mound. J.J. Watt has made defenders look like children when he lines up on offense at tight end. Even 1997 Heisman Trophy winner Charles Woodson captivated NCAA football fans as a star cornerback, wide receiver and punt returner for the Michigan Wolverines.

There may not be a more overlooked season and performance from a two-way player than Hines Ward in the 1995 Peach Bowl between the SEC’s Georgia Bulldogs and ACC’s Virginia Cavaliers. In fact, he set records as the Bulldogs quarterback that day.

Yes, before Ward became a third-round selection of the 1998 NFL Draft and before he won two Super Bowls with the Pittsburgh Steelers as part of a 14-year NFL career, the wide receiver lit up UVA for multiple UGA bowl game passing records that still stand today.

One look at Ward’s box score numbers is enough to make you question why he didn’t play quarterback more often: 413 passing yards, 56 rushing yards and one rushing touchdown. The 413 passing yards stood as the UGA bowl game record until Aaron Murray threw for 427 and five touchdowns against Nebraska in the 2013 Capital One Bowl.

Despite Ward’s efforts in the Peach Bowl (it wasn’t called the Chick-fil-A Peach Bowl or the Chick-fil-A Bowl until 1997), Georgia ultimately fell to Virginia, 34-27, on a last-minute Demetrius Allen 83-yard kickoff return in Atlanta’s old Georgia Dome. The Bulldogs out-gained the Cavaliers 525 yards to 256 yards and totaled double the amount of first downs.

UGA kicker Kanon Parkman hit four field goals — one in the first quarter, one in the second quarter, one in the third quarter and one in the fourth quarter. UGA cut the lead to 24-14 at the end of the first half on Ward’s one-yard score and two-point conversion pass. The Bulldogs then completed the comeback in the second half on Jason Ferguson’s fumble return for a touchdown to tie the game at 27 just before Allen’s kick return. The game marked a second-straight thriller in the Peach Bowl following North Carolina State’s 28-24 win over Mississippi State in January 1995.

Ward was never even supposed to be under center.

Why Was Ward Playing QB?

That season, Ward started at three different positions at one point because of teammate injuries. He received time at running back when starter Robert Edwards broke his foot. When starting quarterback Mike Bobo suffered a fractured knee midseason against Ole Miss, Ward — who played under center in high school — was thrusted into the starting role.

Ward had little time to transition, and Alabama and Florida (who lost the Sugar Bowl the year prior to Florida State and lost the national championship game to Nebraska that year) both pummeled the Bulldogs with Ward at the helm of the offense. He suffered a loss to Auburn but led UGA to an 18-17 win over Georgia Tech.

Ward was Georgia’s Swiss Army knife. And even he played through a slew of injuries that included a broken wrist on his throwing hand he played through in the Peach Bowl. He wore a brace that prevented it from bending backwards.

When asked which of the three positions he preferred playing, Ward (remember, he went on to amass 12,000 receiving yards and 85 touchdowns in the NFL and has garnered Hall of Fame consideration) told the Daily Press in 1995 he’d rather play quarterback.

“If I was given a choice, I’d take quarterback,” Ward said. “I’ve always dreamed about playing quarterback on the Division I level. You get to touch the ball every time. I came to Georgia to get the ball in my hands every time, and there’s no other position where you can do that except for quarterback.”

And he said that before balling out in the Peach Bowl.

Ward would go on to tally more than 1,900 receiving yards, 1,000 rushing yards and 900 passing yards in his four-year career in Athens. He nabbed one first-team All-SEC honor in 1997 but was never named an All-American. Still, his versatility is a rarity in today’s specialized environment and it may be a while before we see something in college football like what transpired on December 30, 1995.