Ed Orgeron’s Coaching Journey Led Him Back Home to LSU 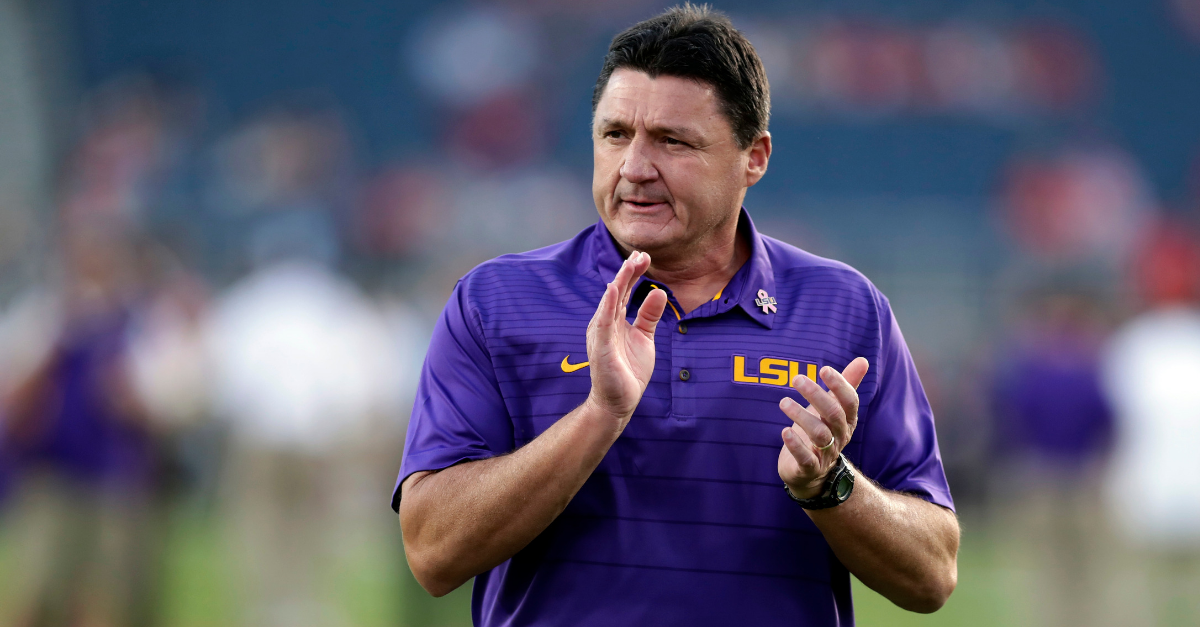 Few college football coaches in America can say they represent their school more than LSU head coach Ed Orgeron does. After all, he is originally from The Pelican State.

Born in Larose, Louisiana, Orgeron brings an original sense of pride to his position in Baton Rouge as the head coach for the LSU Tigers, especially when it comes to recruiting in the SEC.

Ed Orgeron talks LSU-Alabama rivalry at #SECMD17: How do the Tigers stop Nick Saban from luring Louisiana kids over the state line? pic.twitter.com/vXD6x6QKne

Orgeron, a man of Cajun decent, originally signed to play college football for the LSU football team in 1979, but transferred to Northwestern State University to finish out his paying career as a defensive lineman.

Throughout his coaching career, the LSU Tigers fan growing up made numerous stops in his home state, including one in the pros. But his journey not only set him up perfectly for where he is currently, but gave him experience to build LSU into one of the best programs in the country.

The Road to LSU

Coach O’s first two stints on a coaching staff were at Northwestern State and McNeese State as a graduate assistant. He then took a job with the Arkansas Razorbacks as the assistant strength and conditioning coach and took off from there.

Orgeron got his first position coaching job in 1988, when he was hired by Jimmy Johnson to be the defensive line coach for the Miami Hurricanes. He coached numerous All-Americans, including Cortez Kennedy and Warren Sapp, and even recruited Dwayne “The Rock” Johnson.

He would eventually leave the position in 1992 when he got into a bar fight and was fired. It would be a year before he got another job, taking the linebackers job at Louisiana-based Nicholls State.

After just one season, Orgeron then went to Syracuse as a defensive line coach for three seasons and met his wife Kelly at the 1996 Liberty Bowl.

In 1998, he moved to California to take a coaching job with USC. He was hired to coach the defensive line, but when Pete Carroll was hired in 2000, his prowess as an elite leader skyrocketed. Orgeron was named USC’s recruiting coordinator in 2001 and became an assistant coach two years later. Then, in 2004, he was tabbed the National Recruiter of the Year, which all led to his first opportunity as a head football coach with Ole Miss.

Unfortunately, his first chance to run a program didn’t last long. Orgeron led the Rebels for just three seasons before being replaced by Houston Nutt. He then spent a season in the NFL with the New Orleans Saints and then another with the Tennessee Volunteers under Lane Kiffin as their defensive line coach, recruiting coordinator, and assistant head coach.

Coach Orgeron on not getting the Head Coaching job at USC:

"Maybe I'm not the country club guy they wanted. But to hell with them" pic.twitter.com/pTJkwrM6TJ

RELATED: LSU?s Mike the Tiger Habitat is a Must-See Attraction in Baton Rouge

In 2010, Orgeron went back to USC with Kiffin, who had been hired to replace Carroll. He was the defensive line coach and recruiting coordinator until Kiffin was fired, but was awarded a second chance to be a head coach on an interim basis.

After going 6-2 under Orgeron in 2013, the Trojans hired Steve Sarkisian as the head coach and Orgeron decided to resign. That’s what led him back home.

About a month later, Orgeron was hired by Les Miles to coach LSU’s defensive line. A little over a season into this stint, Miles was fired and Orgeron was once again tasked as the interim head coach.

With a 6-2 record to finish the season, Orgeron was given the full-time head coaching position at Louisiana State University.

In three seasons as the Tigers’ head coach, LSU has gone 33-7, including a perfect 14-0 start to the 2019 campaign, which included beating the Oklahoma Sooners in the College Football Playoff semifinal and advancing to face Clemson for the national championship. Fittingly, it seems, that game is being played in New Orleans, Louisiana.

.@JacobHester18 was recruited by both Les Miles and Nick Saban and got to see how both recruit and it had a heavy focus on the state of Louisiana, much like Ed Orgeron.

Ed Orgeron has been able to continue the great recruiting LSU had under Les Miles, and even turned it up over the past couple of seasons, finishing the fifth-ranked recruiting class for the 2019 cycle, according to 247Sports.

His biggest task as the coach of LSU is beating out Alabama’s Nick Saban and Alabama and now even Georgia’s Kirby Smart on the field and in recruiting. That definitely starts with the players in his own state. The 58-year-old has plenty of experience in the area, and growing up by the Bayou should help even more.

With the 2020 class, the Tigers are poised to have another top group. Orgeron just sunk his teeth into Louisiana prospects, including landing Louisiana’s top-ranked wide receiver, and the No. 2 defensive tackle and inside linebacker. Some of his top recruits are from other states, too, including top-10 recruits Arik Gilbert and Elias Ricks.

Ed Orgeron’s journey has been long, but it brought him back to exactly where he wanted: home.

This article was originally published July 4, 2019.

MORE: How the No. 18 Jersey Became LSU?s Most Important Tradition