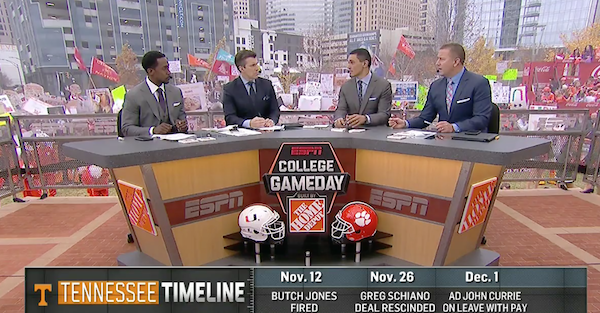 There have been plenty of options for the University of Tennessee, but the program hasn’t been able to land a coach to date.

Earlier this week, Sports Illustrated?s Bruce Feldman reported boosters were attempting to drive Currie out of Knoxville after multiple reports claimed the Tennessee was ?finalizing a deal? with Ohio State defensive coordinator Greg Schiano, which resulted in protests by fans through social media and on Tennessee?s campus.

According to Feldman, Fulmer has ?tried to undermine Currie in hopes of becoming the athletic director.?

The coaching search had already devolved into something disastrous, but Sumlin, Cutcliffe, Brohm and N.C. State coach Dave Doeren all opted to stay away from Tennessee.

Fulmer is expected to take his shots, and whether that means Lane Kiffin returns home, Tee Martin snags the job, the Vols land with Mike Leach or any other notable candidate, it will be interesting to see what the response is from the Knoxville faithful.