Some athletes have destinies. Before they've even been conceived, their parents know they'll be on a football field or basketball court playing for the same team one of them did.

It's why we care so much about LeBron James Jr., Zaire Wade and Arch Manning, who, by the way, looks poised to be the nation's next great quarterback.

The Texas A&M Aggies had their own version of a legacy player, and he stepped up big time in College Station.

After the Aggies lost running back Jashaun Corbin to a season-ending hamstring injury in 2019 and running back Vernon Jackson to a career-ending neck injury the same month, A&M freshman running back Isaiah Spiller took the reigns in the backfield. He hasn't looked back since.

Spiller was part of A&M's monster recruiting class that finished No. 3 in the country. The former four-star prospect didn't enter college with as lofty of expectations as Bronny Jr. or the next Manning prodigy, but he does have a legacy to fulfill.

However, Spiller's already impressing coaches at the NFL level, and we're sure his dad is loving the praise his son is getting.

Fred Spiller was a Tight End for A&M

(He's not related to former NFL running back C.J. Spiller.)

The former College Station rusher's father, Fred Spiller, also played for the Aggies back in the early 2000s. A tight end, Fred Spiller was forced to quit the sport because of a back issue in 2001 while playing under legendary A&M coach R.C. Slocum.

Thankfully, his son has carried on his namesake in College Station. He made an instant impact as a freshman.

In 13 games, Spiller racked up 946 rushing yards and ten touchdowns. He eclipsed that yardage in 10 games in 2020, totaling 1,036 yards and nine touchdowns as he was named First-Team All-SEC. For those counting at home, he's also posted back-to-back seasons of 1,100 of more yards from scrimmage. In 2021, he got off to a hot start, catching the game-winning touchdown from backup quarterback Zach Calzada against Colorado in week 2.

In his first-ever college football game, he rushed for 106 yards on just seven carries versus Texas State. Spiller scored his first touchdown -- the first of two that game -- in another 100-yard rushing performance against Lamar.

His father, of course, was there to record that.

Spiller's breakout game that thrust him into one of the SEC's top-10 rushers came against UTSA. The 6-foot-1, 220-pound back scored three touchdowns and totaled 217 rushing yards on 20 carries. That total was good enough to tie former TAMU running back Trayveon Williams' (who now plays for the Cincinnati Bengals) single-game freshman rushing record.

As The Eagle pointed out, Spiller thrived when quarterback Kellen Mond showed opposing defenses he's just as much of a threat to run the ball last season.

"The more we can create that without the QB run, it's good," Fisher told The Eagle. "So when the QB run comes or the options off of that are good, it's a complete team thing."

While he shined against non-SEC opponents, Spiller struggled at times in conference games and Power 5 matchups in 2019.

Spiller's 60 combined yards on 30 hand-offs against Alabama, Clemson, Auburn and Arkansas don't look pretty but may be more indicative of Texas A&M's blocking than anything.

Still, he found more than 75 yards on the ground against Ole Miss, Mississippi State and South Carolina. Back-to-back road contests against top teams in Georgia and LSU didn't make his job any easier last season in the NCAA.

Spiller showed strides in his sophomore season despite the coronavirus pandemic and COVID-19 outbreak.

He rushed for 100 or more yards in six games, all against SEC opponents, including a ridiculous 174 yards against Florida at Kyle Field. He's a big reason for the Aggies' success (despite no College Football Playoff berth) and why they went to the Orange Bowl game against the UNC Tarheels.

All the glory goes to God for his direction! I?m committed to......???? pic.twitter.com/bSiCouhXwf

A four-star running back coming out of Klein Collins High School (Spring, TX), Spiller was the ninth-ranked running back in the country in the Class of 2019. He was also ranked 23rd overall in the state of Texas and 152nd nationally.

The speedster received interest from plenty of major programs, including Oklahoma and Alabama. When he received that coveted offer from his dad's alma mater, it was like a dream come true.

"I've been wearing A&M my whole life so it's all I know," Spiller told 247Sports. "I still wear A&M so this was a big opportunity for me and my family. It's really big so I thank God for the opportunity. My dad couldn't stop smiling. He was really surprised."

And in Spiller's commitment video, he had a familiar face telling him to "continue your legacy" before Spiller revealed his selection with his dad donning maroon next to him.

The best part about Isaiah Spiller playing for the Texas A&M Aggies isn't that head coach Jimbo Fisher has a steady halfback for Mond or whoever played quarterback to hand the ball off to for at least another two seasons. It's that Fred Spiller gets to witness his son accomplish the things he couldn't because of his back injury.

Hopefully, that'll continue to watch him on Sundays in the NFL.

Fred and his wife Iesha and their two other daughters still live in Spring, Texas, which is an hour and a half away from College Station. Fred works as a behavioral specialist at Klein Collins High School and his wife works at a local high school in the same school district.

Fred, of course, attends as many Texas A&M games as possible. He took the field with his son after the team's big win over the Gamecocks and looked like a natural. I wonder why...

Aggies sawin? ?em off after a 30-6 win over South Carolina...featuring running back Isaiah Spiller and his father, former A&M player Fred Spiller. pic.twitter.com/HBEpdG0QQk

But now the Spillers are in uncharted waters as Isaiah begins his NFL career with the Los Angeles Chargers. 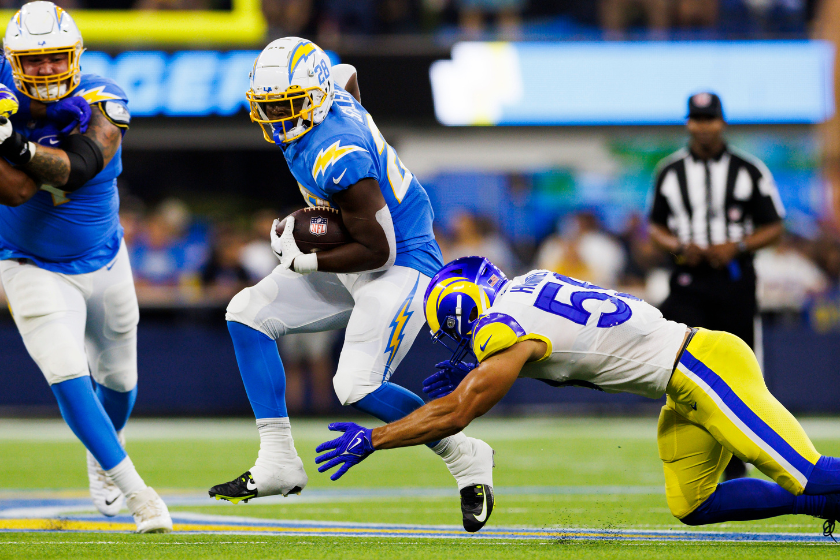 RELATED: Winners and Losers From an Insane First Round of the 2022 NFL Draft

The 2022 NFL Draft was wild, especially in the first few rounds, but Spiller sat tight waiting for his name to be called. It didn't happen on Day 1 or Day 2, but finally, during the fourth round, Los Angeles came calling.

While the Chargers have a solid RB1 in Austin Ekeler, it's possible that they could employ a thunder and lightning approach during the upcoming season. Early in training camp, Spiller saw reps with the second team and was able to impress his coaches during the Chargers' preseason matchups.

If Spiller can keep improving and show his NFL coaches that his time in College Station was just scratching the surface of his potential, it's possible we'll be hearing a lot more from Fred about his incredibly talented son.