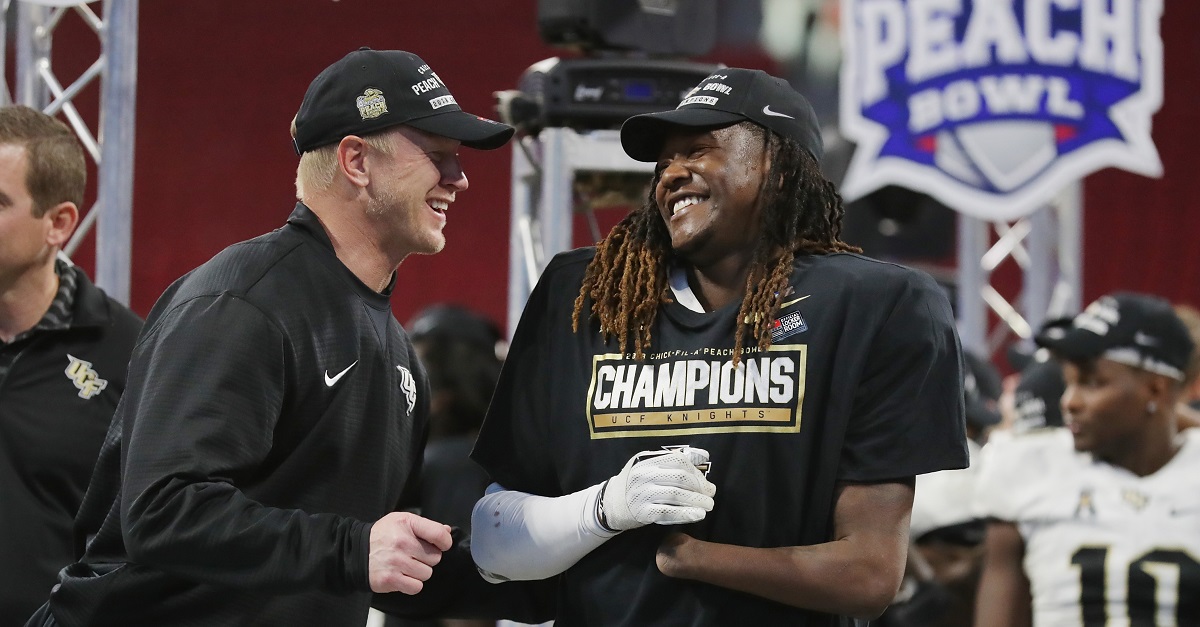 Everyone loves a good underdog story in sports. A few instantly come to mind ? USA Hockey?s ?Miracle on Ice? in 1980, Leicester City?s improbable Premier League title and the 1969 Miracle Mets. As far as American football goes, the UCF Knights football season in 2017 should go down in history alongside them.

What head coach Scott Frost did in Orlando was nothing short of spectacular. He took over a UCF football program that finished 0-12 in 2015, won six games the next year and finished 13-0 in 2017 en route to a self-proclaimed National Championship even though the Knights weren’t selected as one of the four College Football Playoff teams (Clemson, Oklahoma, Georgia, Alabama). But that didn’t stop them from selling national championship merchandise.

It marked the first time in NCAA history a FBS team went from winless in the regular season to undefeated in two years.

Despite being overshadowed in recruiting by the Sunshine State?s Power 5 schools ? the SEC’s Florida and the ACC’s Florida State and Miami ? UCF had legitimate star power on its roster.

Quarterback McKenzie Milton threw for 4,000 yards and tallied the second-best passer efficiency rating in the country behind only Baker Mayfield. Linebacker Shaquem Griffin was named 2018 Peach Bowl Defensive MVP and became a Seattle Seahawks fifth-round pick in the 2018 NFL Draft.

Central Florida established itself as a national contender in 2017, and there were plenty of great moments along the way. Here are five that stand out:

Milton led the Knights to 603 yards of total offense, and the defense picked off Memphis quarterback Riley Ferguson three times. The two teams would meet again in the postseason.

This was easily the single most important play in UCF?s championship season. The Knights and Bulls were expected to produce a thrilling shootout in the first-ever ranked edition of The War on I-4. They didn?t disappoint.

Just 1:41 remained in the fourth quarter of a 42-42 game in Orlando?s Spectrum Stadium. South Florida quarterback Quinton Flowers and wide receiver Darnell Salomon had just hooked up for an 83-yard touchdown pass.

UCF cornerback and future first-round pick Mike Hughes took the ensuing kickoff 95 yards to the house for what wound up being the game-winning touchdown.

The winner of the second installment of UCF-Memphis would be named American Athletic Conference champs. For UCF, a potential CFP berth was on the line. The stakes were high.

After UCF running back Otis Anderson punched in a one-yard score in the second overtime, the Knights came up with a big stop on Memphis?s possession. Griffin supplied the pressure on Tigers quarterback Riley Ferguson, who threw right into the hands of UCF?s Tre Neal.

After the game, news broke the Frost was accepting the Nebraska head coaching job but could possibly coach the Knights in their bowl game. He did.

Say what you want about an Auburn football team being dejected after losing the SEC Championship Game to Georgia. UCF traveled to Mercedes-Benz Stadium in Atlanta and took care of business in the Chick-Fil-A Peach Bowl and showed everyone they may have belonged in the playoff after all.

Milton was phenomenal. Antwan Collier intercepted Tigers quarterback Jarrett Stidham in the end zone with 33 seconds left in the game to seal the 34-27 win. The victory was possibly the biggest in school history, closing the book on an undefeated 13-0 season while silencing all the SEC homers on New Year’s Day.

Feels good to be the champs! 😁🏆

Thank you Disney, and thank you Knight Nation, for a day we'll never forget! #ChargeOn pic.twitter.com/eP0EJkOxoT

UCF athletic director Danny White, along with Florida governor Rick Scott, recognized the Knights as national champions at the parade. White also announced each player and coach would receive championship rings for winning the title.

But one thing is for sure: the 2017 Knights were never supposed to be here. I think everyone can agree that their season ? whether it ended in a legitimate national title or not ? was one for the ages.

This article was originally published May 8, 2019.