College football is broken and Alabama is the culprit.

It's broken like the white refrigerator you threw in your garage after you got a new stainless steel one. Or like your heart when your high school sweetheart said "we need to take a break" when you guys went off to college.

It's bad for college football.

It's bad for ratings.

Before I tell you how the NCAA can remedy this problem, I think we need to talk about why (or more specifically, how) Alabama broke college football, and why that won't change anytime soon with the current path we're on. 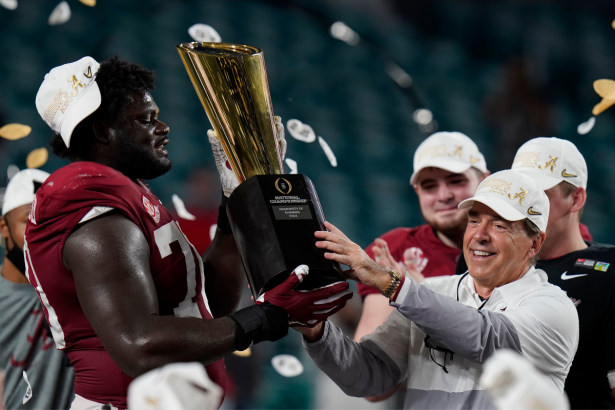 Broken: having been fractured or damaged and no longer in one piece or in working order.

That's how Oxford defines the word broken, and I think it applies to the sport we all know and love. College football isn't working the way it was designed to work anymore. When one team consistently nabs all the five-star recruits and churns out title after title, college football just simply isn't producing the best product for fans. Why should they even be invested if their team has no shot at winning?

See the issue here? There's no freakin' parity. And yes, you could argue teams like Clemson, Ohio State, Georgia and Oklahoma are part of the problem, too. But Alabama is the main perpetuator.

Think I'm just whining about how good Alabama is? I've got numbers to show that fans just don't care for 'Bama's winning ways.

The 2020 national championship game, which featured an Alabama Crimson Tide smackdown of Ohio State, was the least watched national title game since 1998. Some 18.7 million viewers tuned in and probably switched the channel by halftime. Heck, even one of the College Football Playoff semifinal games -- Ohio State-Clemson -- had better ratings that year.

It's official: The 2021 National Championship drew fewer viewers than either Semifinal, a first in the CFB Playoff era and a ratings disaster:https://t.co/GHxZzMCk26

That 2020 Alabama team was one of the best of all time, and yet people cared less than ever to watch them hold up that gold CFP trophy and hear head coach Nick Saban talk about how his guys "committed to the the process."

Fans are tired of seeing the same team over and over again. So it's the time NCAA did something about it, because until Saban retires (if he ever does) the team from Tuscaloosa isn't loosening its death grip on college football.

How to Fix College Football: A Draft for Recruits

Today marks 100 days until Week 0 (August 28) of the 2021 college football season, and the usual suspects could be at the top of the sport again. Caesars Sportsbook by William Hill has Alabama (3-1) and Clemson (4-1) with the shortest odds to win the 2021 National Championship. pic.twitter.com/UHKREFlktP

Before you go firing off comments about how stupid of an idea this is, let me explain.

Every major professional sports league in the United States implements a draft. The worst teams from the previous year usually get the first picks at the best available players to improve their teams. Think about how the Jacksonville Jaguars drafted Trevor Lawrence or how the Detroit Pistons took Cade Cunningham with the No. 1 pick. That's a process that works. Just ask LeBron James and the Cleveland Cavaliers.

Now, imagine a draft for the top high school football recruits. Let's say only the top 100 or 200 were up for grabs and this only applied to Power 5 programs (that could be tweaked, though). The worst teams from the 2020 season (Vanderbilt, Kansas and Syracuse) could have the first three picks in this draft, for example.

Vanderbilt selects Quinn Ewers, the No. 1 QB in the 2021 class (who's committed to Ohio State *yawn*). Maybe Kansas takes the No. 2 QB in Caleb Williams (an Oklahoma commit) and Syracuse decides to take the best defensive prospect in J.T. Tuimoloau (Ohio State).

That would mean Alabama, after winning a national title, would get the very last pick. That would also mean, in theory, better games and better chances for new and exciting teams.

Recruiting outside of those top prospects would still exist, so Saban can still give his spiels to those four-star and three-star athletes about going to the NFL. But this way, there's at least a chance for the smaller, worse programs to compete.

The parity in college football just isn't there. https://t.co/jBrJvQ3Zt7

How would this have looked a few years ago? Maybe Trevor Lawrence plays for the Oregon State Beavers and wins a national title. And Justin Fields could have been wearing the Illinois navy and orange while he set all sorts of Big Ten records.

The way it's going now, the best high school players are picking the same five or six schools.

In the 2021 class, 30 of the top 50 recruits are committed to one of Alabama, Ohio State, Oklahoma, Clemson or Georgia. Something just isn't right here, and there's no way other programs can compete if they're not getting the top recruits (unless they have some miracle transfer quarterback like Joe Burrow).

Then there's the new NCAA NIL laws. Alabama's Bryce Young was damn near a millionaire before he ever started a game. Quinn Ewers hadn't even finished high school before he inked a deal worth $1.4 million as he looks to take Ohio State by storm in the future.

Why would any high school player not head to the programs where companies are going to pay top dollar for endorsement deals? I don't blame the companies for shelling out the dough for Bryce Young, because Alabama football will probably win the national championship game again, and that's great exposure. But I do think this is going to hurt the smaller schools, and there are a ton of them.

Honestly, a high school draft isn't even that crazy of an idea given how much college football has changed just in the last few months.

If the NCAA wants to preserve its product and #MakeCollegeFootballGreatAgain, maybe it should consider some sort of draft. Otherwise, you better get used to more Alabama blowouts and Nick Saban speeches.