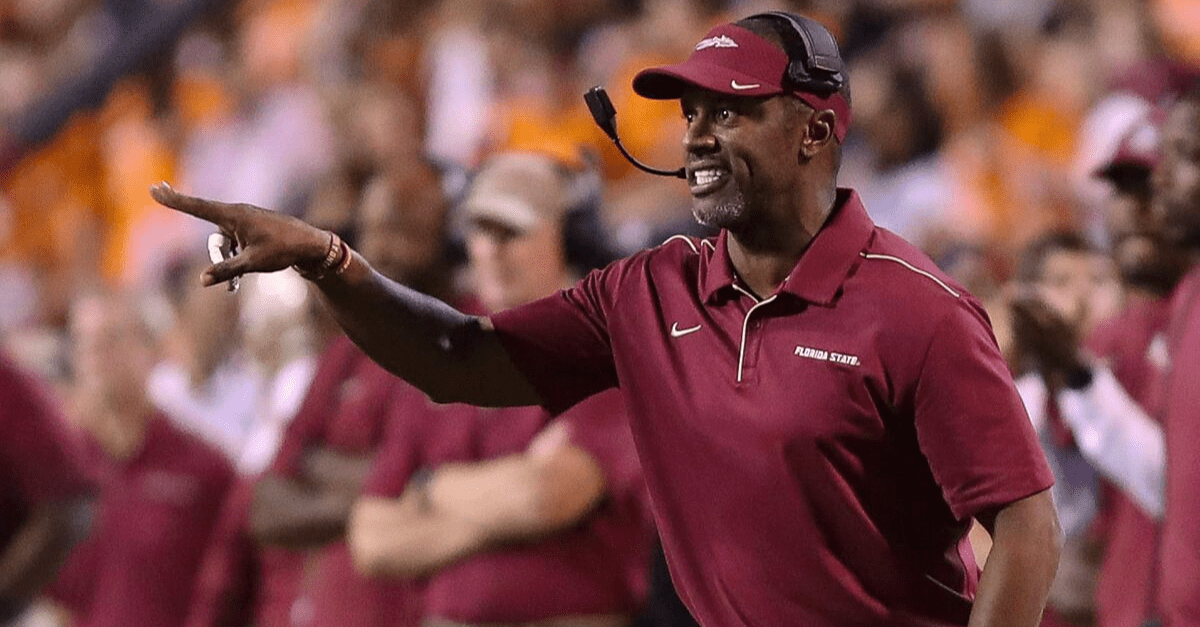 Before becoming a head coach for the Florida State Seminoles, Willie Taggart was a star quarterback who was recruited by one of the most famous coaching families in football history.

As a quarterback out of Florida, it was Jim Harbaugh who recruited Taggart to Western Kentucky while Jack Harbaugh was the head coach of the Hilltoppers. It was also the Harbaughs who helped him begin his college football coaching career.

After leading the Bradenton Manatee High School football team to a 26-4 record and Florida state championship games in two years as the starting quarterback, Taggart was recruited by Jim Harbaugh to play at Western Kentucky University. At the time, the young Harbaugh was still playing in the NFL, but helped recruit the Florida All-State standout for his father, Jack, who was the longtime head coach for the Hilltoppers.

From 1994 to 2001, Jim Harbaugh was an unpaid assistant for WKU, who was mainly a recruiter for his father, even though he was still an active player in the NFL. He was an offensive consultant during those years, laying a foundation for his future career as a head football coach.

After redshirting his first season for the Hilltoppers, Taggart started at quarterback for the next four seasons, just the third player in the 50 years prior at the school to become a four-year starter at quarterback.

During those four seasons from 1995 to 1998, he set numerous school records, including all-time rushing yards and touchdowns. He was an FCS (then called Division I-AA) First-Team All-American and also finished in the top seven for the Walter Payton Player Award twice, which is a Player of the Year award given to the top player in FCS.

He is just one of four players in school history to have his number retired. They even retired his number one the year after he finished his playing career. But when his time as a player came to an end, he immediately went into coaching with the Harbaugh’s.

A FLORIDA BOY LIKE US… Peep the 2 open face golds 💯#FLgridiron #Sep3 pic.twitter.com/Wm330z91xn

RELATED: The 10 Most Iconic Wins of Bobby Bowden?s Career

In 1999, Taggart began his coaching career at his alma mater as an assistant coach and working with the wide receivers. He moved to coaching the quarterbacks the following year — the position he would coach at Western Kentucky until he left in 2006. However, after his first season in that position, he picked up additional roles.

In 2001, he become the co-offensive coordinator and also was in this role when Western Kentucky won a Division I-AA National Championship in 2002.  Then in 2003, he became the assistant head coach as well. But once again, Jim Harbaugh came calling in 2006.

Harbaugh was hired as the head coach of the Stanford Cardinal after the 2006 season and he brought Taggart on as the running backs coach, an important role for a team that would go on to have one of the best rushing attacks in the country. One of the most notable pieces from his time at Stanford was his best player, Toby Gerhart, who finished second in the voting for the 2009 Heisman Trophy.

Taggart got his big break when he became the head coach at Western Kentucky in 2010. The job wasn’t easy with the program just finishing their transition moving up the NCAA ladder to becoming an FBS school and into the Sun Belt Conference. The Hilltoppers also on a long losing streak, but the first-time head coach showed he could turn a program around, going from 2-24 in the two seasons before he arrived to 14-10 and a bowl berth in his final two seasons.

Congrats to Willie Taggart. Has given much to #WKU as player, assistant and head coach. He'll do well at South Florida.

After his third season coaching the Hilltoppers, Taggart took the head coaching job with the South Florida Bulls, another rebuild with just three wins in 2012. Though they won just two games in his first year, USF won a combined 19 games in his final two seasons in 2015 and 2016, including a school single-season record of 11 wins in 2016.

Despite being so successful over those two seasons, the Bulls somehow didn’t win an American Athletic Conference championship due to Temple and Houston also being really good.

After leading the Bulls for four seasons, Taggart moved on to another struggling program, this time Oregon. The Ducks had gone 4-8 in 2016, but finished with a 7-6 record in Taggart’s only season in Eugene. Before the bowl game, Taggart accepted the head coaching position at Florida State after Jimbo Fisher left the Seminoles for Texas A&M.

Although he hasn’t had immediate success back in his home state of Florida in the ACC, ‘Noles head coach Willie Taggart has shown on multiple occasions that he is fully capable of rebuilding programs with his great recruiting classes. With FSU struggling towards the end of Fisher’s tenure and the beginning of Taggart’s, fans are still hoping he can eventually turn it around like he has with his past teams.

An interesting fact about Taggart is he has only coached in one bowl game as a head coach, even though he has had five seasons with a team winning at least seven games and three teams ranked in The Associated Press Top 25 at some point during the regular season.

The only bowl game he coached in was the Miami Beach Bowl following the 2015 season. Many of the other bowl games he would have coached in were played after he accepted jobs at other schools.