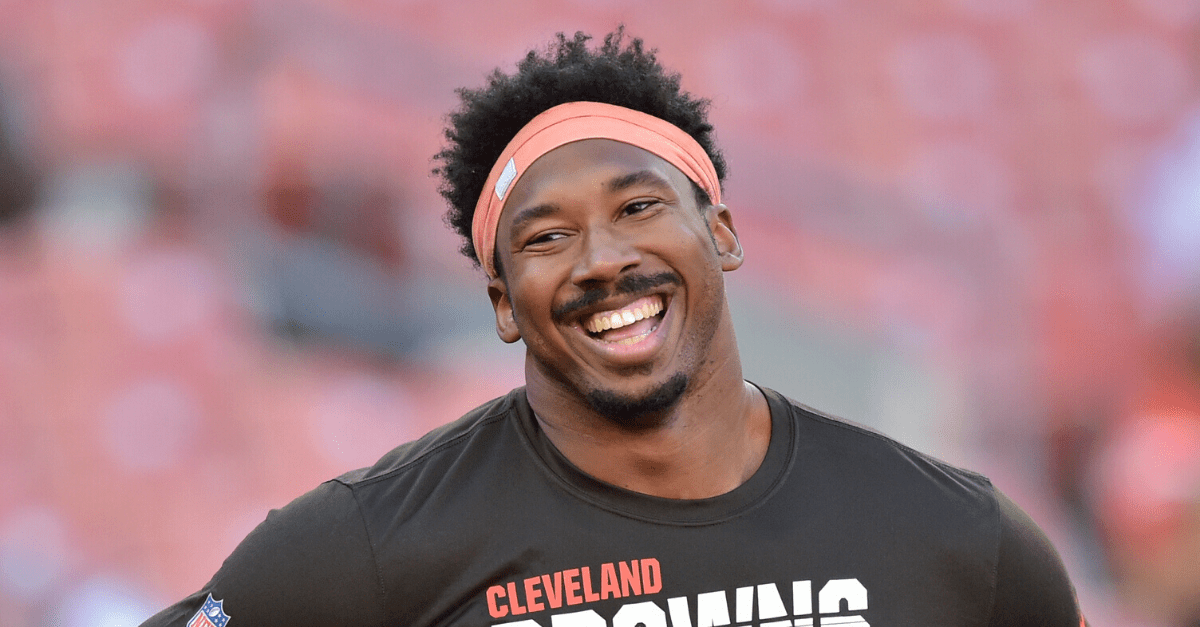 The Texas A&M Aggies have sent numerous NCAA football players to the NFL, and a good deal of them have evolved into Pro Bowlers and All-Pro impact players for their respective teams.

The top seven former Aggies in the NFL is a pretty impressive list. It includes future Hall-of-Fame punter Shane Lechler, one of the best pass-rushers of all time in Von Miller and Mike Evans, who joined Randy Moss and A.J. Green as the only wide receivers in NFL history to begin their careers with five consecutive 1,000-yard seasons.

Before he was gearing up alongside Odell Beckham Jr. and Baker Mayfield for what was the most anticipated football season in a long time for the Cleveland Browns or before he set the TAMU career sack record, the two-time First-Team NCAA All-American was just a kid from Arlington, Texas, and a force of nature at Martin High School.

I use the word “kid” lightly.

Take a gander at how freaking big this human being was as a teenager. Imagine walking by a four-limbed boulder in the hallway on your way to class. For those wondering, that’s what 6-foot-4, 240 pounds looks like.

Myles Garrett on this infamous picture of him as a senior in high school 😮 pic.twitter.com/O1b8tAqSot

But this is a HIGH SCHOOLER on a HIGH SCHOOL football team we?re talking about. And he looks like one of the Monstars from Space Jam.

Needless to say, he played like one when he took the field.

Two of those clips particularly stand out to me. The first is the one of him bulldozing and throwing into the Earth?s crust whatever puny offensive tackle stood in his way. The other is Garrett dropping back and effortlessly picking off a pass.

As a senior, the defensive lineman absolutely dominated opposing offensive lines en route to area Defensive Player of the Year honors from the Fort Worth Star-Telegram and Dallas Morning News. He put up 20.5 sacks and 88 tackles — 39 for a loss. He finished his prep career with 33.5 sacks, 172 total tackles, three forced fumbles and one interception.

Garrett imposed his will on opposing offensive linemen, and they’ll tell you how helpless they felt trying to block him. A few of them lived to tell their stories of facing the future No. 1 pick in the Star-Telegram:

?It was like cheating. We literally couldn?t do anything about it,? James Robinson said of the night in 2013 that Garrett?s Arlington Martin team wore down Robinson?s Weatherford Kangaroos 47-3. ?He would just swim past our center, and two seconds later, he?s in the backfield.?

?We had just scored our first touchdown, and he had been playing defensive end, but they put him at nose on the extra point try,? Dhillon said. ?He runs through the line, jumps up, bats the ball down off the kicker?s foot with one hand, picks it up in stride with his other hand and runs it 99 yards the other way for two points. That showed me how freaky athletic he is. He was playing basketball out there with a football. He did that twice to us that game.?

The legend of Myles Garrett was born one night when Arlington Martin defensive coach Anthony Gonzalez suggested to head coach Bob Wager to put him in when their defensive line was struggling against Arlington Lamar.

“He might be the most competitive person I’ve ever coached in my 14 years of coaching high school football,” Gonzalez told The Eagle. “He does not want to lose. He refuses to let somebody beat him. He’s always had that competitive edge.”

Watching A&M's Myles Garrett before he heads to the next level? We're throwing back to high school HERE! #TBT #ThrowbackThursday #LSUvsTAMU pic.twitter.com/bVDdXhMYLx

Garrett comes from a long bloodline of athletes. His mother, Audrey Garrett, was an All-American track athlete at Hampton. His sister, Brea Garrett, won an indoor championship for weight throw at Texas A&M and heavily recruited her brother to follow her to TAMU. His brother, Sean Williams, was a 6-foot-10 power forward who played for Boston College and became a NBA first-round draft pick for the New Jersey Nets.

Coming out of high school, Garrett was wanted by every school with a football program. Per 247Sports, he was ranked the No. 2 overall recruit in the 2014 class and is the 24th best prospect in the site’s history. He was also the highest-ranked defensive player in Texas A&M recruiting history.

He almost chose Ohio State over the Aggies, but not for football reasons. He is obsessed with dinosaurs and apparently, OU has a pretty good paleontology program that Garrett was interested in. I wonder if that pays the same as the $20 million signing bonus he received for being the first overall pick.

At the combine, his gifts continued to impress NFL scouts and coaches. He showed up at 272 pounds and posted numbers comparable to NFL great Mario Williams.

The Browns took him first overall and signed him to a four-year, $30.41 million contract in 2017. After preseason and training camp, head coach Hue Jackson named him a starting defensive end. He sacked New York Jets quarterback Josh McCown twice in his debut and he’s racked up 18.5 more sacks in his first two seasons.

Swinging Mason Rudolph’s helmet during a Thursday Night Football game against the Pittsburgh Steelers earned Garrett an indefinite suspension that ended his 2019 season. That offseason, the Browns signed him to a five-year, $125 million contract extension.

Whether Garrett goes on to have a Hall-of-Fame NFL career or simply a good one, he’ll probably always be remembered in the Arlington area as a high school legend.

This article was originally published August 23, 2019.