When the Houston Astros took the field during the World Series at Minute Maid Park in Houston, they finally were able to deliver something that manager Dusty Baker has been searching for for over two decades - a World Series win as a manager.

Baker is a baseball lifer, having played in MLB for 19 years. Was he a prolific all-star slugger, destined to be a first ballot Hall of Famer? No, but his career is still something to be proud of. Most of his tenure patrolling outfields around the league was spent in the uniforms of the Atlanta Braves (playing alongside teammate Hank Aaron) and Los Angeles Dodgers. He also spent a few years in the Bay Area, spending a few seasons with the San Francisco Giants and Oakland Athletics before retiring as a player. He made it to the World Series three times while with the Dodgers, winning a World Series Title in 1981. He is arguably the best storyline among the many that surround this year's World Series. So why wasn't he been able to climb the MLB mountaintop? 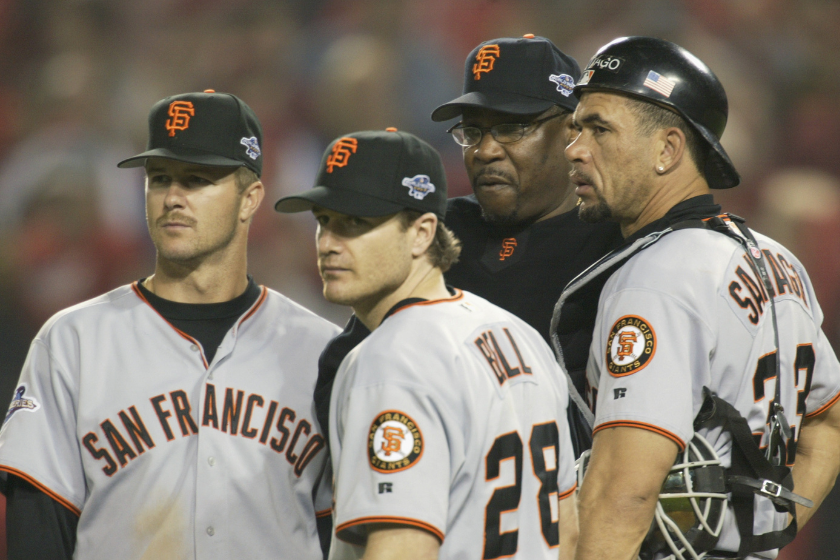 RELATED: No-Hitter, No Thank You: Combined No-Nos are a Boring Sign of a Changing Game

It didn't take long for Dusty to make his way back to the game of baseball. After retiring in 1986, he joined the Giants organization, initially as a first base coach in 1988. Five years later, in December of 1992, he became the seventh African-American manager of a Major League Baseball team when the Giants hired him to replace Roger Craig. His success in his rookie season as a manager was a harbinger of what was to come. He won the NL Manager of the Year that season, leading the team to a record of 103-59 (though the team didn't make the playoffs that year). He would spend ten seasons in the Giants dugout. On three separate occasions, the team made the postseason. In 2002 they made it all the way to the World Series, where they would battle the Anaheim Angels. It would be Baker's first World Series as a manager.

The series went back and forth, featuring close games, as well as a couple of blowouts. The Giants clobbered the Angels in Game 5 at Pacific Bell Park, winning by a score of 16-4. That left them with the chance to clinch the title in Game 6, which would be back in Anaheim. Things looked promising when the Giants took the lead in the middle innings, building up a 5-0 cushion heading into the bottom of the 7th inning. That's when the wheels fell off. After getting the first out in the 7th, Baker went to his bullpen and the moves didn't pay off. Ultimately, the Angels would put three runs on the board, then add another three in the bottom of the 8th, earning them a 6-5 victory in Game 6 and sending the series to a "winner-take-all" Game 7. At the time, the five-run deficit was the largest a team had ever overcome to win a World Series elimination game. In that deciding game, the Angels would defeat the Giants 4-1 to claim their first (and only) World Series title. It would be the final game Baker would manage for the Giants. His contract was up at the end of the season and wasn't renewed, despite the fact that he'd just led the club to its first pennant in 13 years. Given his success, it didn't take long for Dusty to find a new gig. He signed on to manage the Chicago Cubs in November of 2002. 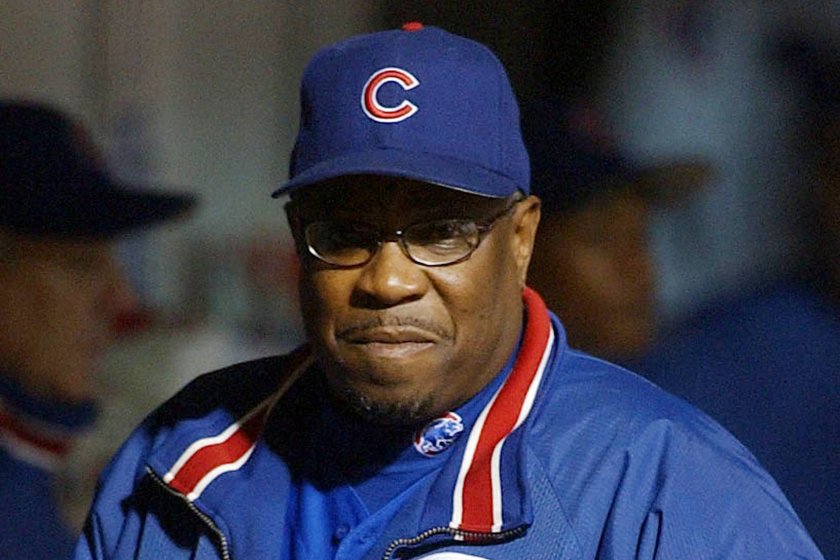 RELATED: Bartman Who? One Error Could've Created an Alternate Timeline in Baseball History

With the Cubs, Baker had an immediate impact on a franchise that was still waiting for an elusive World Series title of its own. In his first season at the helm, Baker led the team to the postseason. After winning the NL Central Division title, they defeated the Atlanta Braves in the NLDS and would move on to face the Florida Marlins in the NLCS. Once again, Dusty and his team would stand on the precipice of victory, only to fall short. They were five outs away from advancing in Game 6 when an ill-fated fly ball down the left field line introduced the world to Steve Bartman. After the initial furor died down, the Cubs would fall apart in that inning, allowing eight runs to cross the plate. They lost that game 8-3 and would ultimately go on to be eliminated in Game 7. Baker would fail to make the postseason with the Cubs again, and after his initial four-year contract ended, he and the Cubs parted ways. Dusty would manage the Cincinnati Reds from 2008 through 2013, taking them to the playoffs on three separate occasions, though failing to reach the World Series during his tenure. He joined the Washington Nationals for two seasons in 2016 and 2017. His teams won the NL East both years but would lose in the National League Division Series each time.

By 2020 Dusty Baker had spent more time in the dugout as a manager than he had on the field as a player. Early on in 2020, the Houston Astros organization (and MLB in general) had been rocked by news of the sign-stealing scandal in 2017 that had recently come to light. After firing manager A.J. Hinch, they turned to Baker to try and help rehabilitate the franchise that had been tarnished in the aftermath of the cheating scandal. He guided the team through their first season since the scandal broke with aplomb. Things were further complicated by the COVID-19 pandemic, leading to a shortened season with no crowds at games. Still - for all the adversity in the situation Baker inherited, he found his way back to the postseason before losing in the American League Championship Series to the Tampa Bay Rays. Last year, the 2021 season would see Baker finally return to the Fall Classic. They would face off against the Atlanta Braves, ultimately losing in six games. After the season, Baker and the Astros agreed to an extension for him to return for 2022. This year, the Astros finished the season with a regular season record of 106-56 and a second consecutive division title. He has marshaled a roster packed with talent (only five of whom are still with the club from the 2017 scandalous season). The Astros had gone undefeated through the playoffs en route to the World Series. They swept the upstart Seattle Mariners in the American League Division Series, then followed that with a sweep of the New York Yankees in the ALCS. 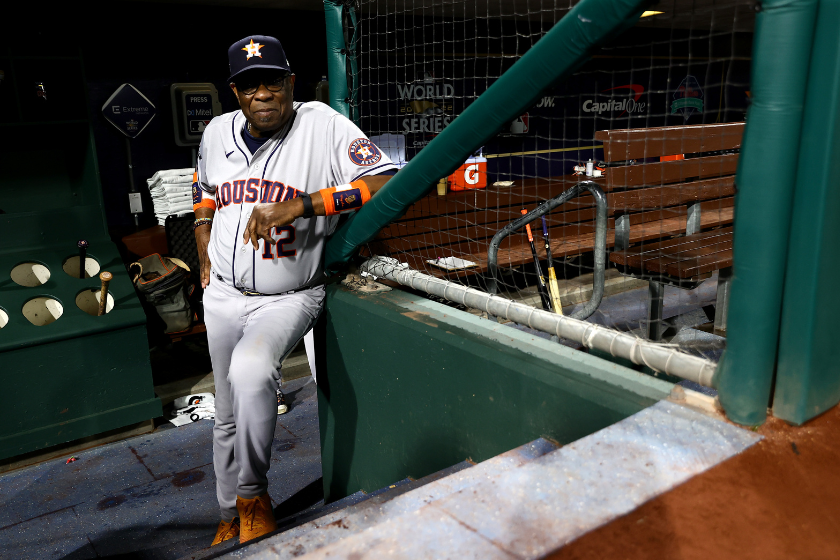 In the 2022 World Series Game 1 against the National League Champion Philadelphia Phillies, aces Justin Verlander and Aaron Nola squared off. It took extra innings before a J.T. Realmuto home run gave the Phillies a series lead. Houston rebounded in Game 2, jumping out to an early 3-0 lead against Phillies starter Zack Wheeler, ultimately evening the series with a 5-2 victory. Game 3 took place a day later than scheduled thanks to a rainout, which seemed to help the Phillies more than the Astros. Philadelphia teed off on Lance McCullers. Bryce Harper, Alec Bohm, Kyle Schwarber, Rhys Hoskins, and Brandon Marsh each hit a home run during the 7-0 shutout victory. The momentum seemed to be shifting toward the Phillies, who would have one final game in at Citizen's Bank Park to try and push Houston to the brink. Instead, the Astros responded by tossing a combined no-hitter, winning 5-0, and heading back to Houston with two home games to try and finally get that elusive ring for Baker.

And finally, thanks to the bat of Yordan Alvarez, Dusty got his ring.

Over the course of his managerial career, Dusty Baker has endured highs and lows. He's set records, both good and not-so-good, that tend to come with such longevity of career. One thing that has never been in doubt when it comes to Baker is his character. Talk to anyone - whether a casual fan of the game or a fellow "lifer" who's been around Dusty throughout his journey. You'd be hard-pressed to find anyone with a bad word when it comes to the man. If anyone is deserving of that last piece of what is sure to be a Hall of Fame career, it's Houston Astros Manager Dusty Baker. And now, he's got his World Series ring.