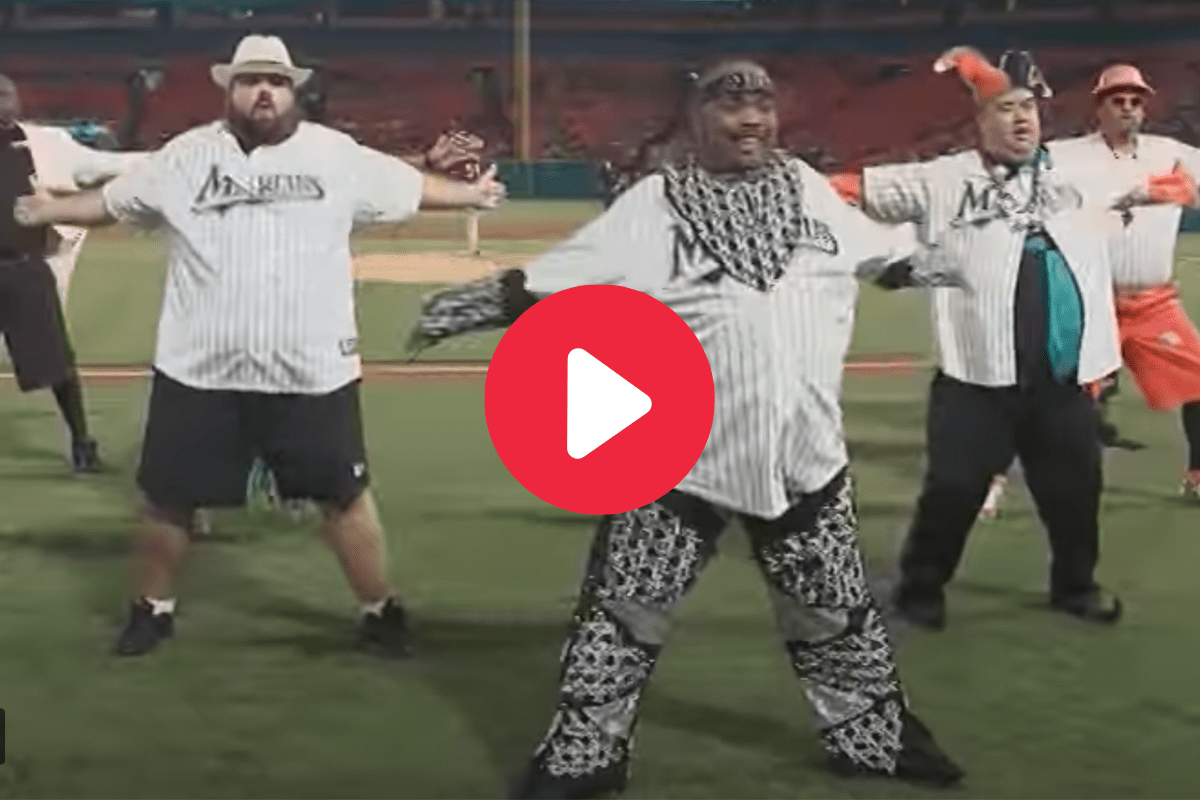 Cheerleaders are an integral part of going to any game. Imagine an NFL game without the Dallas Cowboys cheerleaders or the Los Angeles Lakers without the Laker Girls dancing at halftime. Fans pay for the full stadium experience, and that’s part of it.

How about a group of 400-pound men shaking their booties instead? Yes, it’s true. The MLB’s Florida Marlins (now Miami Marlins) used to have 15 oversized big boys who preferred bonbons over pom poms and absolutely boogied harder than any other cheerleading or dance crew in professional sports.

Ladies and gentlemen: I present to you The Manatees.

It’s difficult watching someone else live out your dream.

Not only were the Manatees (obviously) not held to the same physical standards that female cheerleaders are today, but they also got paid to dance completely off beat while having a blast. Plus, these swift sea cows tangoed with the team’s female dance gang, the Mermaids.

A teal-suited Santa Claus. A construction worker. A guy whose nickname was “Chubbalicious.” The Manatees looked like a slow-pitch softball team that took a wrong turn on the way to Golden Corral after a game. And it was absolutely glorious.

Back in 2008, the Marlins’ marketing team sought out ways to draw fans. They sent out messages to Marlins fans seeking plus-size male dancers and a legendary group was born.

“Every now and then you’ve got to score one for the big guys,” member Angel “Chubbalicious” Villarreal told the New York Times. “I felt like that ‘Saturday Night Live’ skit when Chris Farley is trying out for the Chippendales.”

As a lifelong Marlins fan, I’ve gotta say that this absolutely worked to perfection because these dudes could put on a show. Every home game was a treat thanks to the Marlins Manatees. When the baseball team played poorly, at least fans had a dance team who could rumble the earth with a few twerks to look forward to.

Unfortunately, the Manatees were a short-lived group. The Marlins re-branded for the 2012 season and played in a new stadium, and the chunky cheerleaders were left in the past.

“It’s cold,” Villarreal told the Miami New Times in 2011. “We stood by them when times were tough and got people to go to the stadium. Now the Manatees are getting the rug pulled out from under them.”

A Facebook page titled “Save The Manatees” was set up, but it wasn’t enough.

The Marlins have traded away numerous stars throughout the years, but the biggest mistake is by far not re-signing their beloved fat men. I mean, how can you not love this: