World Series moments are larger than life. As if they were scripted with a golden quill, they moment feel more fiction than non-fiction. A no-hitter on the game's biggest stage? That's insane. How about a walk-off home run? That  is one of those miraclous, magical moments. And now, Yordan Alvarez's massive home run in Game Six of the 2022 World Series, is one of those moments. 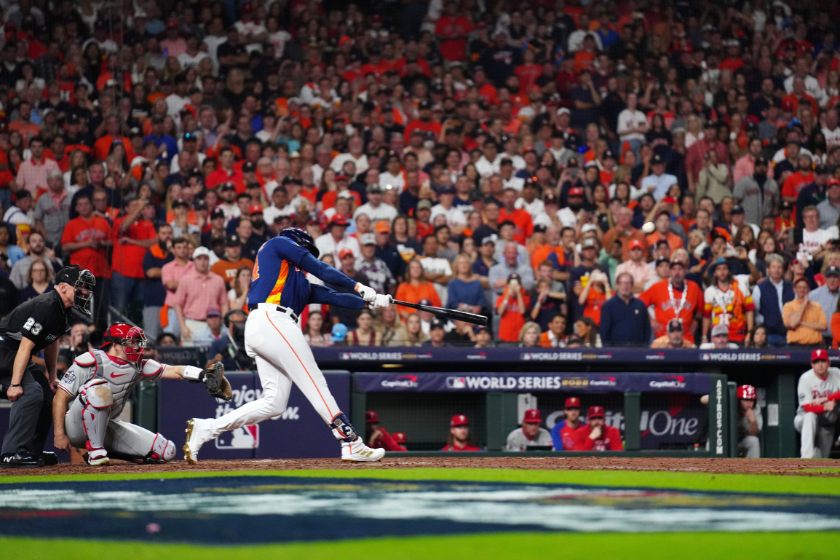 Game Six of the MLB World Series started with five innings of either great pitching or struggling hitters, depending on your point of view. But at the top of the sixth inning, Kyle Schwarber took Framber Valdez deep to take a 1-0 lead. It was a momentum grabbing blast, especially when you consider all of the Philadelphia Phillies postseason success thus far has been based on the home run. Bryce Harper would nearly add another with a bomb that barely hooked foul, only to strike out on the next pitch and end the top half of the inning.

Zack Wheeler would start the Bottom of the 6th by hitting Martin Maldonado. Following a Jose Altuve fielder's choice and a Jeremy Pena single, the Houston Astros had runners on first and third with only one out. Philadelphia went to their bullpen for the first time in the game, handing the ball to reliever Jose Alvarado for a lefty-lefty matchup. Enter Yordan Alvarez.

Balls are not supposed to travel that far, especially not is a World Series game. That's a three-run home run OVER the batter's eye in center field of Minute Maid Park. That was not an area they imagined a baseball would land when they built the place. Alvarez only had two hits in the series before smashing an Alvarado fastball for his third home run of the Postseason, with a monster blast coming against Robbie Ray and the Seattle Mariners in the ALDS. The Astros would go on to sweep the Mariners in three games.

But the World Series is another level altogether. After a scandal tainted their 2017 World Series win over the Los Angeles Dodgers, the Astros finally have a clean win that no one can take away from them.

With big plays from Alex Bregman, Justin Verlander and Jose Altuve, the Astros sit atop Major League Baseball. After losses to Nationals and Braves, the Astros can hand another banner in left field.

It might not have been an actual walk-off home run from the Houston slugger, but it certainly feels like that could've been the swing that wins the ring for Dusty Baker. The day started with the news that Houston would be without Yuli Gurriel for the rest of the playoffs due to a knee injury and it ended with Yordan Alvarez's towering three-run blast that put Houston in the driver seat to end the World Series in front of the Astros home crowd.

Some moments live on in MLB history. This is definitely one of those moments.