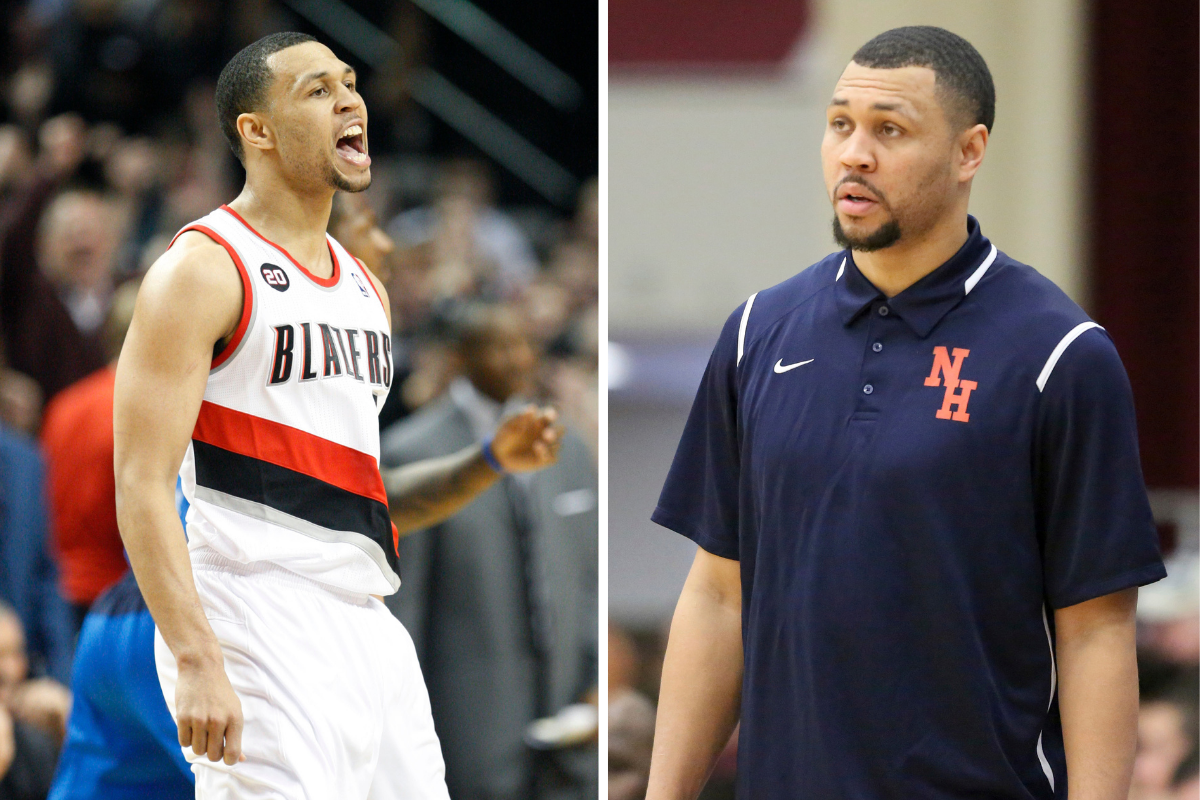 The Garfield High School boys basketball team meets in the locker room for the pregame rundown. They go over matchups and strategy, weaving in words of fiery impetus to strengthen a winning mentality.

The team huddles for a breakdown. They bolt out for warmups.

The head coach stays back and calms himself. He studies the gameplan one last time.

That coach is 36-year-old Brandon Roy, the former Portland Trail Blazers star whose NBA career had the legs cut out from under it.

Roy graduated from Seattle’s Garfield High School in 2002. He chose to play college basketball locally at the University of Washington under head coach Lorenzo Romar.

He improved each season and came into his own as an upperclassman. The hometown kid won Pac-10 Player of the Year as a senior and led the Huskies to consecutive Sweet Sixteen appearances in the 2005 and 2006 NCAA Tournaments.

The basketball player entered the 2006 NBA Draft and was selected sixth overall by the Minnesota Timberwolves. On draft day, he was traded to Portland for Randy Foye.

Brandon Roy immediately caught the injury bug. An impingement in his left heel sidelined him for 20 games at the beginning of his rookie year, yet he recorded his first career double-double against the Toronto Raptors early in his return.

Roy was named the Western Conference’s Rookie of the Month in January, February, and March. He won the 2007 NBA Rookie of the Year, averaging 16.8 points, 4.4 rebounds, and 4 assists in 57 games.

Roy’s play during his sophomore season earned him a spot in the 2008 All-Star Game. He tweaked his ankle in the final game before the break, but still participated in the festivities in front of the New Orleans Hornets home crowd along with teammate Lamarcus Aldridge. The injury affected his level of play in the subsequent weeks.

The next season, B-Roy had a piece of cartilage removed from his left knee and he was ready to go for the season opener against the Los Angeles Lakers. The procedure didn’t affect his clutch gene. He nailed a 30-footer against the Houston Rockets in overtime with 0.8 seconds left to give the Blazers a 101-99 win near the beginning of the season and made buzzer-beating layup against the New York Knicks in February.

Portland later met Houston in the first round of the NBA Playoffs.

Roy ? nicknamed “The Natural” by Blazers announcer Brian Wheeler ? averaged 26.7 points per game in the series. However, The Rockets defeated the Trail Blazers in six games. Roy made the All-Star team again and was named to the All-NBA Second Team.

#NBA: On this day in 2008, Portland's Brandon Roy scored 52 points in an OT victory against the Phoenix Suns.

In the closing days of the 2009-10 season, the shooting guard was revealed to have a slight meniscus tear in his right knee. He returned for Game 4 of the first round of the playoffs against the Phoenix Suns, but the Blazers were eliminated in six games for the second-straight year. Roy earned a third All-Star appearance and All-NBA Third Team honors.

The wear on Roy’s knees caught up with him in 2010; they lacked cartilage and ailed his level of play. He was ruled out indefinitely and had arthroscopic surgery on both knees in January 2011. The Blazers’ leader returned to action in late February as a reserve.

Portland faced eventual champion Dallas Mavericks in the first round of the 2011 Playoffs. Roy struggled in the series coming off the bench but showed promise of returning to form by leading a 23-point comeback in Game 4. He finished with 24 points to tie the series at two games apiece. Luck would have the Blazers drop two straight, booted from the postseason in six games for the third consecutive year.

Roy announced his retirement in the midst of the 2011 NBA lockout due to knee degeneration, per ESPN and The Oregonian. The lack of cartilage between both knees was causing bone-on-bone collision. He called it quits one year before superstar Damian Lillard joined the franchise.

Roy attempted a comeback in the 2012-13 season with the Minnesota Timberwolves. He played only five games before requiring season-ending knee surgery that ceased his playing career for good.

Where is Brandon Roy Now?

The former NBA All-Star was hired as the head basketball coach of Seattle-based Nathan Hale High School in 2016. He coached an elite squad led by Denver Nuggets forward Michael Porter Jr. to an undefeated season that was capped by state and national championships. Roy was awarded the 2017 Naismith National High School Coach of the Year.

The head coach job at Garfield, Roy’s alma mater, opened the following year, and he jumped on it. Roy led the Bulldogs to the 2018 state title with a 28-1 record. He took the 2018-19 year off for personal issues but returned to win another state championship in March 2020.

Roy is a perfect three-for-three on championships so far in his high school basketball coaching career.

Kobe Bryant once called Roy the toughest player to guard in the West. That speaks volumes to what Roy was capable of on the court.

When healthy, he was a dynamic playmaker and scorer. In only 341 career games, he lifted the Blazers from the depths of the league to the playoffs. Unfortunately, his body couldn’t hold its end of the bargain.

MORE: What Happened to Rasheed Wallace and Where is He Now?