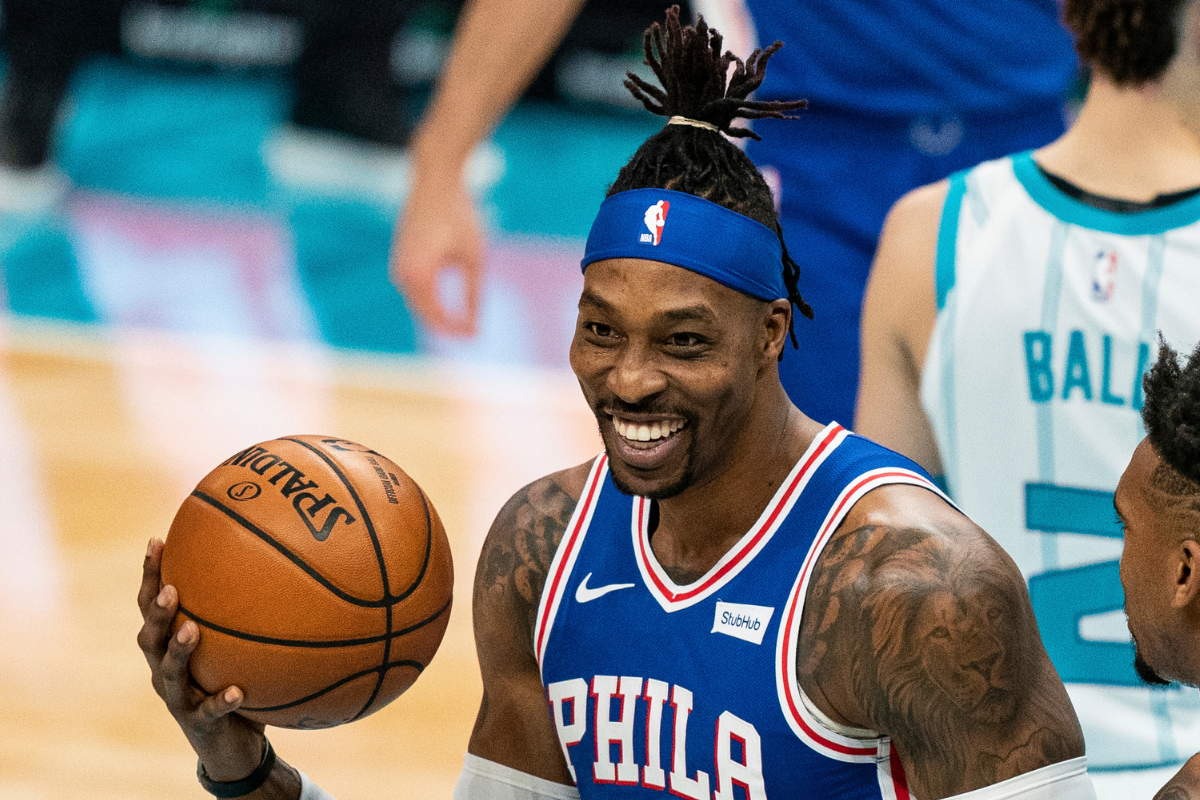 Philadelphia 76ers center Dwight Howard is easily one of the greatest centers in NBA history. Since becoming the first-overall pick in the 2004 NBA Draft, the 6-foot-10 athlete has developed into an eight-time NBA All-Star, five-time All-NBA First-Team player, three-time NBA Defensive Player of the Year and tallied more than 18,000 points.

Howard may not be the dominating shot-blocker or dunk artist he once was with the Orlando Magic, but the 35-year-old is proving he’s still a serviceable big man. He’s played for the Houston Rockets, Atlanta Hawks, Charlotte Hornets, Washington Wizards, and Los Angeles Lakers before he joined Sixers last offseason.

While Howard won his first ring with LeBron James and the Lakers last year, he’s looking to help the 76ers win the Eastern Conference and bring home its first NBA championship since 1983.

Howard experienced pain last year when his son’s mother tragically died. He’s also been the subject of some crazy rumors and hateful comments on social media. That being said, what is the eight-time All-Star selection’s personal life like?

Hold up, I didn’t know Dwight Howard was engaged to Te’a Cooper. pic.twitter.com/2tpc2kN8FD

Dwight Howard was formerly married to WNBA player Te’a Cooper. Cooper plays guard for the Los Angeles Sparks, and the two quietly tied the knot after the NBA Bubble in Orlando.

Cooper confirmed she and the NBA player split during an Instagram Live session this spring:

?No, I do not go out with him. I?m not with him no more. Leave it alone. I don?t want to see yall in my comments saying it no more.?

?Don?t add me to nothing that have to do with him. It?s over with. It?s adios amigos.?

Cooper is 24 finished her college basketball career at Baylor. Howard, who is 11 years older, has been the subject of criticism because of their age gap. They reportedly began dating when Cooper was a teenager.

Cooper began her basketball career at McKeachern High School in Powder Springs, Georgia. She then played collegiately at the University of Tennessee before transferring to the University of South Carolina in 2017.

Just tryna be the spark you need 🤪 pic.twitter.com/35Uj2B05Qx

She wrapped up her career at Baylor in 2019-20 as a graduate transfer and was then selected in the second round of the 2020 WNBA Draft by the Phoenix Mercury. The Mercury cut her amid the coronavirus pandemic and COVID-19 outbreak, leading to the Sparks picking her up.

She and Howard got engaged sometime in 2019, and he told KWTX.com that he was a big fan of the Baylor Bears women’s basketball team.

“I’ve been a big Bears fan for a long time,” Howard told KWTX.com. “I haven’t had a chance to get to a game this year but I watch all the games faithfully. It’s been one of the most exciting seasons for the men and the women, too.”

While the NBA superstar has 2.9 millions followers and Cooper 1.3 million, the two didn’t post pics of other very much during their relationship.

Dwight Howard addressed the rumors of his sexuality. He said the viral allegations hurt and he didn't want to show his face.

The basketball player faced all sorts of accusations and hateful comments in March 2019. A man named Masin Elije came forward and filed a lawsuit against Howard, claiming they were together but that Howard had cheated on him with men and trans women, according to NewsWeek.

Howard has also dressed in drag as Rihanna on a Spanish TV show.

The Philly center finally addressed rumors in 2019 about his sexuality.

Whoever Dwight Howard chooses to spend time with is his business, but he felt like he needed to address the situation.

Dwight Howard has five children with five different women, according to Sports Illustrated.

He had his first son, Braylon Howard, in 2007 with former Orlando Magic cheerleader and Basketball Wives star Royce Reed.

His four other children are named Jayde, Layla, David and Dwight III. Two of the mothers live in Florida, two in Los Angeles and one in Houston.

?It?s a tough situation, obviously,? Howard told Sports Illustrated in 2017. ?I should have been more responsible. I messed up. I sinned. But I won?t look at any of them as a mistake. They?re all a blessing to me.?

In May 2020, Howard experienced heartbreak. Melissa Rios, the mother of his 6-year-old son David, died of an epileptic seizure at her home in Calabasas, California, according to ESPN. She was a real estate agent and epilepsy advocate.

The NBA star is currently honed in on the NBA playoffs and winning his second ring. Under head coach Doc Rivers, the Sixers are the top seed in the East. If they make it to the NBA Finals, they thankfully won’t be facing Luka Doncic and the Dallas Mavericks or NBA MVP Nikola Jokic and the Denver Nuggets.

Dwight has found success as a role player behind star center Joel Embiid. Now that he has a title, Howard knows what it takes to win it all.

MORE: Seth Curry is Married to His Coach?s Daughter