In recent years, Boston has been dominant in almost every professional sport. The Boston Red Sox have won two World Series rings in the last decade and four total in the 21st Century. The Bruins have sent their fair share of success, winning a Stanley Cup in 2011 and making two more appearances in the Finals since. Of course, there's the New England Patriots and their insane run with Bill Belichick and Tom Brady, but this story isn't about any of those teams. No, we're bringing it back to a time when one team ruled Beantown with an iron fist and one man helped bring basketball glory back to the Boston Garden. A player so talented his nickname includes the word "Legend." We could only be speaking about one prolific hooper: Larry Bird.

Just six games into his age-32 season in 1988, the Celtics legend opted to have surgery on both of his heels to fix the bone spurs plaguing him. By the time the three-time NBA MVP returned in 1989, the Celtics' front office had launched a plan to "modernize" an aging roster and put speedy, youthful talent on the floor. Offensive chemistry plagued the C's, which required Bird to play the fourth-most minutes per game of his career that season.

But his warrior's mentality masked a dark secret. Larry Bird's back was failing him, and it was too late before anything could be done.

The Beginning of the End of Larry Bird's NBA Career 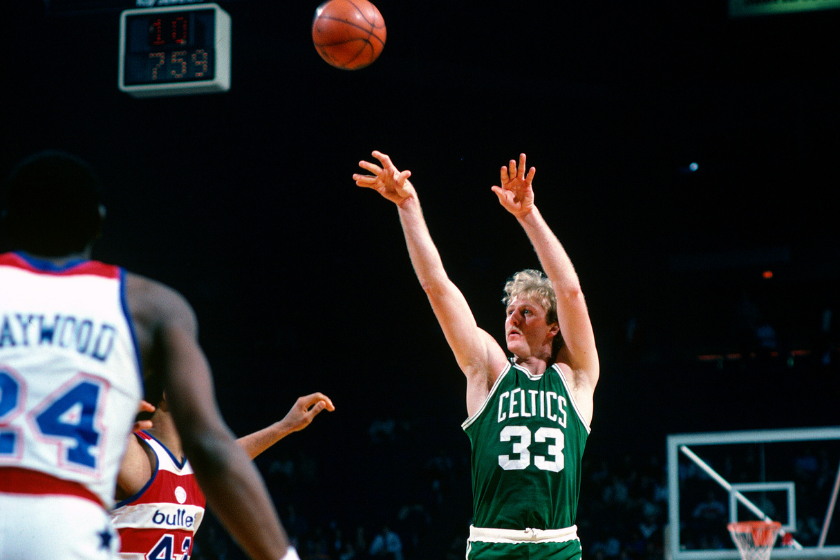 Boston began the 1990-91 season on fire thanks to seasoned veterans like Kevin McHale and Robert Parish, plus youthful energy from Reggie Lewis, Brian Shaw, Kevin Gamble and rookie Dee Brown. But as always, it was Bird who led the team in scoring despite a career-low 19.4 points per game.

Fans began to notice something off about Bird's game. Sure, No. 33 was never the fastest guy on the floor, but his foot speed and agility was waning fast. Bird shot a career-low 45.4 percent from the field and missed 22 of the final 48 regular season games with a "sore back."

Turns out, Bird was suffering from a compressed nerve root that ultimately forced his retirement in August 1992.

But before he was done, "Larry Legend" had a few more tricks up his sleeve.

Larry Bird put together an all-time performance in a series-clinching game against the Indiana Pacers back in 1991.

Relive one of the gutsiest performances of Bird's career ahead of the Celtics-Pacers series ???https://t.co/1bg1c2HWuE pic.twitter.com/pee1omo4or

The Celtics won 56 games under first-year head coach Chris Ford and were the second seed in the Eastern Conference playoffs. Facing the fabled NBA dynasty in a first-round series was the upstart Indiana Pacers led by "The Rifleman" Chuck Person -- a nickname he earned for being a deadly 3-point shooter -- Reggie Miller and Detlef Schrempf.

Boston grabbed Game One at home as Bird (Remember, his back was essentially gone) put up a triple-double. Person responded with 39 points and a team playoff record seven 3-pointers to win Game Two. The teams split the next two games at Market Square Arena.

The deciding Game Five at the Boston Garden would go down as one of the greatest series-clinching moments in NBA history.

Bird had already spent time in the hospital earlier in the series. (Before Game Five, teammates recalled how Bird was struggling just to get his pants on.) With just over four minutes to play in the first half, Bird crashed to the floor going after a loose ball in the backcourt. The Boston Garden went silent as timeout was called. Bird writhed in pain.

"The doctor told me I probably had a concussion and they didn't think I should go out there with both the back and the damage I did to my brain," Bird later recalled.

Larry Legend sitting out a deciding playoff game with a failing back, broken face and concussion? Yeah, right.

Larry Bird Returns to Save The Celtics

As halftime rolled by and the third quarter wore on, it appeared as if the Celtics would be continuing without their All-Star forward. Then, "Larry Legend" jogged out of the locker room and the place went bananas. You may one Celtics player pulling a similar stunt in recent years, but like all things in the Celtics franchise, a legend had perfected the move first.

"I kept hearing the crowd oohing and aahing, and I kept asking what the score was. I had this massive headache on the right side of my head but finally I decided, 'This could be your last game ever, so you'd better get out there and give it all you can.'"

Bird led Boston on a 33-14 run in the second half before Indiana cut the lead to 120-118 with 22 seconds remaining in the fourth quarter. Person put up a desperation 3-point shot to win the game, but it rimmed out. A few Brian Shaw free throws and a final Person three-ball was all that remained.

"The Hick From French Lick" put on a heroic performance to finish with 32 points, nine assists and seven rebounds. Bird shot 12-of-14 inside the 3-point line during his 33 minutes of action.

It was the dawn of a new era in The Association, but it was the beginning of the end for Larry Bird.

Bird managed to play just 45 games the following season. He averaged 20.2 points, 9.6 rebounds and 6.8 assists in what ended up being his 13th and final year. He's the only person in NBA history to receive Rookie of the Year, Most Valuable Player, NBA Finals MVP, All-Star MVP, Coach of the Year, and Executive of the Year honors over the span of his career. But that's to be expected from an overachiever like Bird.

There are too many iconic moments to count. The sixth overall pick of the 1978 NBA Draft played an entire game left-handed. The Hall of Fame inductee captured three-straight league MVPs, made 12 All-Star teams, is a three-time Three-Point Champion, and was first-team All-NBA nine times. Only Bird and Steve Nash are multi-year members of the prestigious 50-40-90 club.

Larry Bird is an all-time great, and his "swan song" in the 1991 playoffs proves how fierce a competitor he really was.