Or...how's this? Blame Coach Mike D'Antoni. And actually, D'Antoni would probably like it if we started blaming him for more, w/r/t NBA history.

Ok, Coach, what if we called you "one of the architects of the modern game"? Is that a little bit better?

How about "one of the most unsung and under-celebrated influences in the history of the league?"There we go, eh? 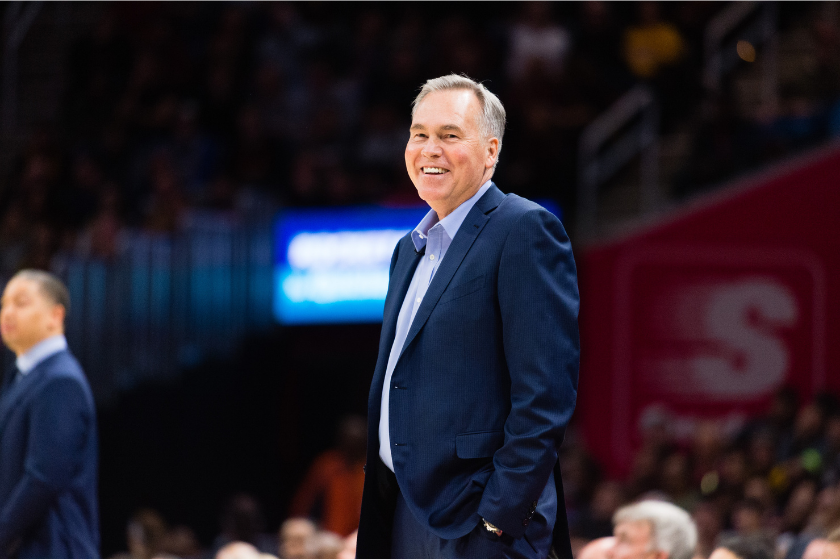 You have to understand that in front of Steph Curry's shooting greatness is the freedom to pull. If Steph had entered the league ten years before he did, he would have stepped into a league where shots from several steps behind the three-point line were more than discouraged, they were not allowed. A casual pull from twenty-seven feet away would have garnered a player an immediate seat on the bench, even if it was a make.

Steph of course stepped in and opened the door for every player who followed him -- to practice the shots and to eventually normalize them -- by being so effective from distance, but it was D'Antoni who was among the first to encourage his wing players to set up to receive the ball a few steps behind the line, in order to step into their shot and stay behind the three-point line, and given an inch, shooters across the NBA have since taken a mile. 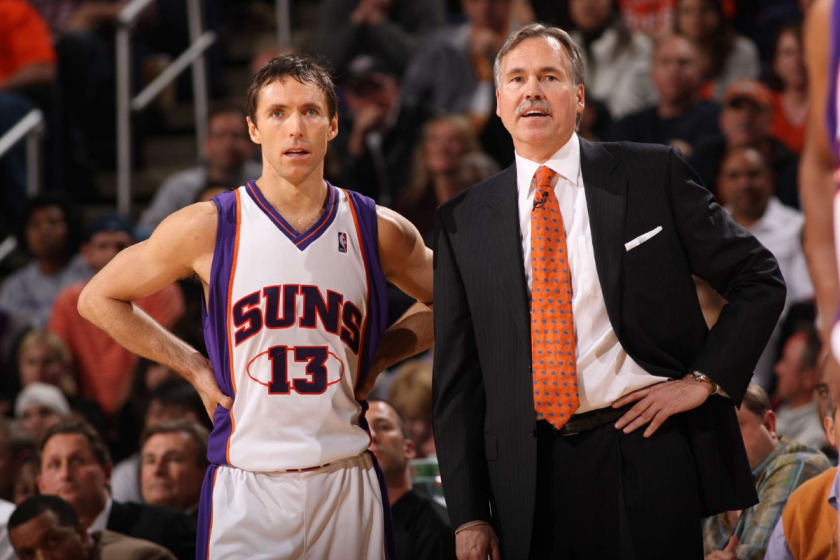 In Phoenix, D'Antoni's offense was dubbed "Seven Seconds or Less." It emphasized not just a fast break, but a continuous secondary break, and saw point guard (and now Brooklyn Nets head coach) Steve Nash trying to facilitate a good look at the basket within the first seven seconds of each possession.

The point, however, was not always to get the quickest shot, but to run as if fast breaking not just after turnovers and missed shots, but after makes as well, and stressed the secondary break over traditional half-court offensive sets.

That is not to say D'Antoni's Phoenix Suns didn't have offensive sets. His philosophy was to use "gravity" to put the opposing defense in vulnerable positions, stressing spacing and a high screen & roll, pulling the defense where it doesn't want to go and stepping confidently into open shots. The idea was that anytime it was executed properly, the offense could always produce an advantage.

Ideally, the result was that each game would be a simple matter of "make or miss." You get the shot you want every time and you shoot it, and if you make the shots, then you win. If you miss the shots, then, well, you likely lose.

That was the Achilles Heel for Mike D'Antoni in Phoenix -- what happened when they missed the shots.  In other words, defense.  When shots aren't falling, defense can keep a team in the game, and in the playoffs, when shots are often not falling, it has always been an NBA mantra that "defense wins championships." For D'Antoni, the Suns' offense helped him win his first Coach of the Year award in 2005.

So what was missing in Phoenix? One thing is the new NBA archetype, the Three & D. It is now a player profile that's filled on any and every NBA team with championship aspirations. Beginning with the likes of James Posey, and Shane Battier, and continuing today with guys like Danny Green, Marcus Smart, Jae Crowder, Robert Covington, and many others, the Three & D-er is that player who is responsible for concentrating on two things: hitting open 3-point shots and playing good, tough defense.

The Suns, under D'Antoni, had many players who represented either Three (Tim Thomas, Quentin and Jason Richardson, Steve Nash) or D (Raja Bell), but never really had that guy to own both. The closest they came may have been in the case of Shawn Marion, a bouncy, athletic small forward with an awkward but effective jumpshot, who was traded by then-GM Steve Kerr to Miami for Shaquille O'Neal in February of 2008. O'Neal was 36-years old at the time of the trade. 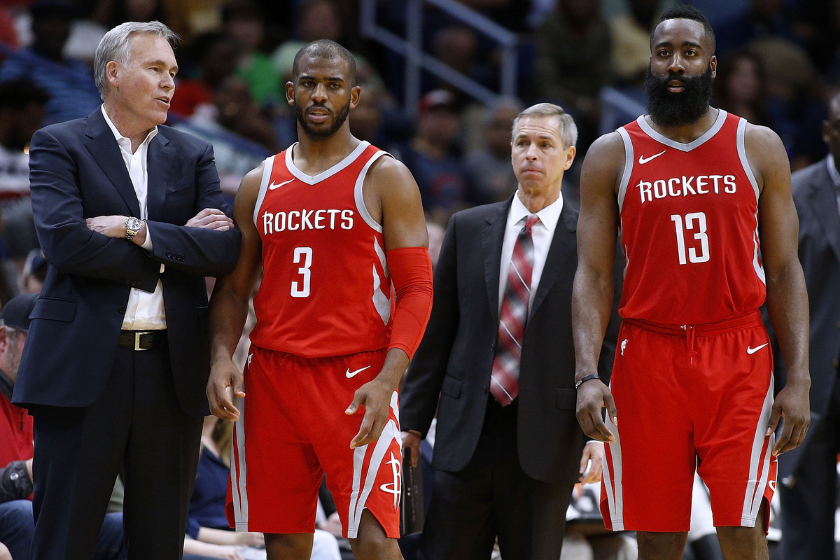 And then what happened with the Houston Rockets and James Harden? Pace was slowed; it seemed like rather than the gravity being commanded by players and spacing, it was all concentrated in the ball. The spacing principles and high pick-and-rolls remained, however ball movement was replaced by ball bouncing.

In fact, one must wonder, should we really be discussing this time with such negativity when in his four seasons in Houston, D'Antoni's Rockets averaged nearly 55 wins per, and lost a Game 7 in the Western Conference Finals?

D'Antoni's Suns could never get past Greg Popovich's San Antonio Spurs, whose style personified almost the opposite basketball aesthetic of "Seven Seconds or Less." This helped to validate the criticism D'Antoni's philosophies faced. D'Antoni's second Coach of the Year award would come during his time in Houston.

Conversely, his Rockets were time and again stymied by Steve Kerr's Golden State Warriors. Kerr was the GM of the Suns during D'Antoni's tenure, and the two were ultimately unable to exist on the same page, with D'Antoni leaving Phoenix to coach the Knicks in 2008.

Add in a dash of drama between Harden and his old Oklahoma City teammate Kevin Durant and we've got storylines aplenty. Now, with Kerr's Warriors teams executing the D'Antoni principles of spacing and gravity and fast pace to perfection, and in doing so winning three titles in four years from 2015-2018, Kerr has since spoken highly of D'Antoni as an NBA influencer, and has even admitted regret in how things ended with D'Antoni in Phoenix.

The question, if you're Mike D'Antoni, is: where was all this praise when I was coaching? So often now you hear D'Antoni's name mentioned as an innovator, and hear his basketball mind praised, however in his time it seems like he was only ever criticized, or treated as a cautionary tale of what happens when you care only about offense and neglect defense.

Where is Mike D'Antoni Now? Not Where You'd Think

The Pelicans have hired Jarron Collins as an assistant coach and Mike D?Antoni as a coaching advisor ?

D'Antoni has bounced around various organizations after being relieved of his duties in Houston. He was an associate head coach with the Philadelphia 76ers before stopping in Brooklyn to be an assistant coach to his former star in Nash.

Now, D'Antoni works as a coaching consultant within the New Orleans Pelicans organization. How is an innovator of the game still sitting on the shelf? Where are the head coaching jobs he's rightly earned?

Perhaps, like all things D'Antoni, it's a matter of timing. With the New York Knicks, D'Antoni along with Carmelo Anthony, couldn't get passed a strong Boston Celtics squad in the first round, who bulked up prior to the Italian coach's arrival in the Big Apple. After New York, D'Antoni went to Los Angeles to helm a Los Angeles Lakers team in the twilight of their championship seasons. Filling the shoes of Phil Jackson would take an entire coaching staff. The timing was never right for D'Antoni.

So as you take in this edition of the NBA Playoffs, know that in every game you watch, you're seeing the influence of Mike D'Antoni. Every deep three, every high screen and set up in the corner in transition, every continuous fast break, was beaten into the fabric of the league and made standard practice by Coach D'Antoni.

We didn't know it then, but we sure know it now.

MORE: Why Are People Protesting Glen Taylor & the Minnesota Timberwolves?