Hallelujah, we're edging closer and closer to the return of NBA basketball. Preseason action tips off Friday, September 30 with the returning champion Golden State Warriors vs. Washington Wizards. Yeah, it is only preseason, but the NBA is back in our lives.

To kick off the return of our favorite players and obsessive refreshing of NBA Twitter, we have the always entertaining NBA Media Day.

This year we were properly fed by the NBA's greats, and the drama from the offseason is now back at the forefront. To celebrate our irrational excitement, let's take a look at some of the top moments, bizarre anecdotes and dramatic chatter taking place on the NBA's media bonanza.

?There was a lot of uncertainty around our team last year? We came to a mutual agreement that we should keep moving forward.?

-Kevin Durant on his offseason with the Nets. #NBAMediaDay pic.twitter.com/dlYEGmeoPP

Oh, the life of a Brooklyn Nets fan. It's frustrating to say the least. The offseason was no exception, with relentless gossip swirling around Kevin Durant and his feelings about playing in Brooklyn. Is KD staying or going? Does he even want to be in Brooklyn? If you, like so many, were sick of the KD conversation and worried about the state of the Nets locker room, today's media day may not have helped calm any nerves about Brooklyn's ability to rise above the injuries and drama from last season. Is the media manufacturing remaining tension or has the team yet to find a way to move past it all?

"I'm just messing with stuff to make the internet mad. That was my goal this summer and it worked."

Jimmy Butler's new look on media day is the dream memes are made of. The controversial Miami star had a lot to say Monday, including that he could play power forward. "I don't care about those speculations, I don't play the 4. I could play the 4, yes. If they absolutely need me to play the four I could yes. If they absolutely wanted to have a conversation about playing the 4, I could yes. But I'm not playing the 4." However, his new look stole the show and made Twitter's head explode. The man knows how to go viral.

Is Zion Prepping for the 2022 Season or a Marvel Movie?

"I'm in the gym and something happens and I'm like 'Oh man, I can really do that! That's different!'" ?

Zion's been feeling good on the court lately

New Orleans Pelican Zion Williamson hit media day looking like he might be worthy of Thor's hammer. The Pelicans power forward transformed his body in the offseason and has his eyes on a championship, "I'd be lying to you if I said anything less than a championship."

The four-time returning champs were all smiles, but some shone brighter than others. Klay Thompson's story of perseverance, resilience and struggle to make it back to championship play last season is the kind of plot line sports fans ride for. And seeing Thompson beaming with joy was a highlight for Klaytheists everywhere.

Media Day, for all its stellar interviews, has a lot of downtime. Sacramento Kings' Kevin Huerter brought his competitive nature to the waiting game. 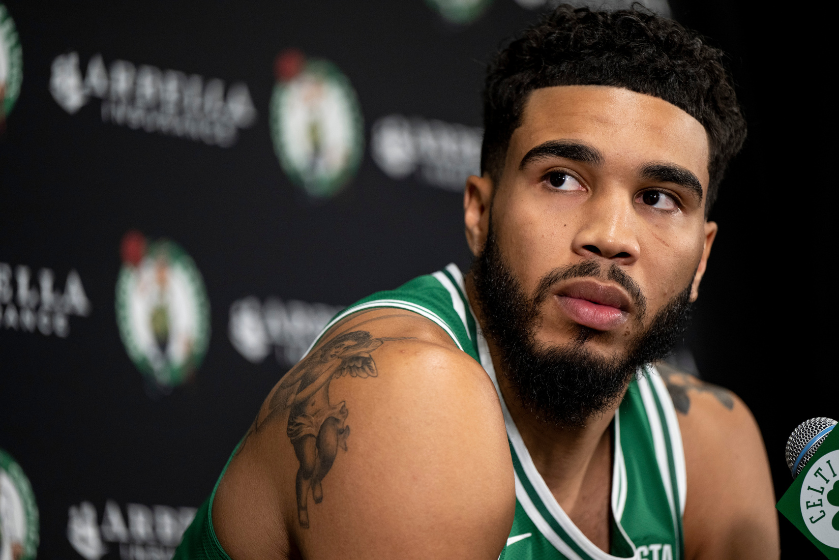 The Celtics energy on media day felt collectively down as players had to field questions about the recent suspension of coach Ime Udoka. It's hard to not feel terrible for all the emotions, confusion and uncertainty the players are facing this year. Marcus Smart expressed the players' shock, saying "we couldn't believe what we were hearing, especially at the time we were hearing it."

It was also brought to light that some players found out just like everyone else, on Twitter. Star Jayson Tatum seemed melancholy discussing Udoka, telling the press, "It's just a lot. If I'm being honest... you're still trying to process it all knowing we start practice tomorrow."

Boston fans have to hope the team can rally together during this difficult time and find a way to deliver a winning season.

"It's been hell for us... these last couple days for us have been confusing."

Weirdness At Its Finest

One of the best parts of NBA Media Day is the access fans have to the league, something the NBA does better than the rest. Fans relish the ridiculousness and raw joy players exude. I mean, how can you not? Context or not, these Grizzlies are living their best lives.

Robin Lopez is a National Treasure

A resident jokester and self-proclaimed Screech Powers of the NBA, Cleveland Cavaliers Robin Lopez brought the jokes to media day. He even took to twitter to discuss the possibility of a weekly leaderboard for the team's title of best hair and to poke fun at his former teammate Anthony Davis. He tweeted, "Every Media Day I hope I'm going to be interviewed by a Muppet wearing a hat, but it's year 15 and the closest I've come is playing with Anthony Davis."

Veteran Lopez put his affable personality into action when asked to do a triple-threat pose that comes naturally for the athlete. Cue the laughter.

Photographer asked him to pose by doing something he?d naturally do. He chose to box out, lmao. pic.twitter.com/43KVJZxEtU

Amped To Be Back

Media Day left us with an endless pool of storylines to dissect, clips to absorb and bits to giggle over. These highlights barely scratch the surface. One thing is for sure: a die-hard NBA fan could scroll NBA Twitter all day long unearthing gems along the way. Our hunger for NBA basketball is finally being fed,  and as we inch closer to regular season tip-off October 18, the nuggets will become even more nourishing. Until then, hold tight to media day highlights and the fact that we'll be watching giants Lebron James and Steph Curry face off in under a month's time.