Football is a brutal sport. Players throw their bodies at each other over a pigskin ball, and the result can be concussions, internal bleeding and even paralyzation, as Darryl Stingley tragically found out in 1978.

That being said, it should be no surprise fights are common in the sport. Cleveland Browns' Myles Garrett swinging a helmet at Pittsburgh Steelers' Mason Rudolph will go down in infamy. The Andre Johnson-Cortland Finnegan on-field boxing match wasn't pretty. And Vontaze Burfict somehow still has a job despite too many dirty hits to name.

Still, those incidents might not compare to the time 350-pound Tennessee Titans defensive tackle Albert Haynesworth stomped on a player's bare face.

Who Was Albert Haynesworth? 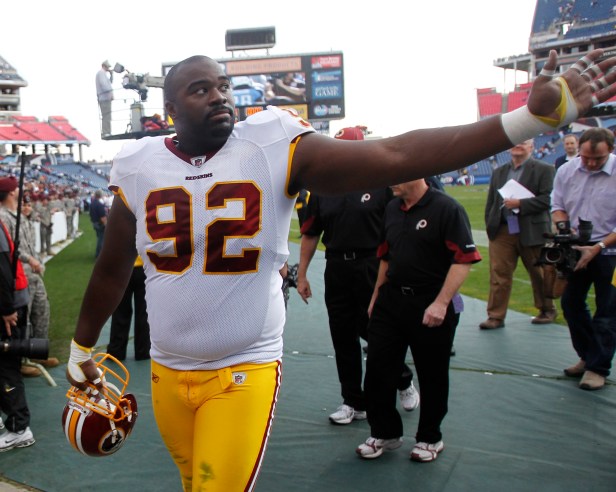 ?Albert Haynesworth was a two-time Pro Bowl and two-time First-Team All-Pro defensive tackle in the NFL. He played with the Tennessee Titans, Washington Redskins, New England Patriots and Tampa Bay Buccaneers from 2002-2011.

After starring at the University of Tennessee, the 2002 first-round pick developed into one of the best defensive tackles in the NFL. He was heralded so much that he signed a seven-year, $100 million deal with the Redskins in 2009, a contract in which he played just two years of and went down as one of the terrible signings in NFL history.

When he arrived in Nashville as a rookie, Haynesworth may have already had anger issues. He once kicked teammate center Justin Hartwig in the chest at the team's 2003 training camp.

The Titans were taking on the Dallas Cowboys in October 2006 when Cowboys running back Julius Jones scored a touchdown in the third quarter.

As players were getting up from the play, Haynesworth stomped on Cowboys center Andre Gurode's un-guarded face. Gurode's helmet had fallen off, though some believe Haynesworth ripped it off.

The video is as grotesque as you might think.

Remember when Albert haynesworth stomp Andre Gurode with his helmet off??? pic.twitter.com/jndcB46qGk

The force of the 6-foot-6, 350-pound man's foot digging into Gurode's face made a gash on his forehead. Had Haynesworth cleated him lower, he may have lost his eye. The Cowboys player, who walked to the sidelines in disgust, needed 30 stitches on his face.

Haynesworth was ejected for the stomp. The NFL suspended him five games, the longest suspension ever given for an on-the-field incident at the time. Green Bay's Charles Martin was previously suspended for two games in 1986.

Haynesworth's coach, Jeff Fisher, sent an apology to the Cowboys. NFL commissioner Roger Goodell said there was no place in the game for that. Haynesworth was even disgusted by his actions after the game.

"What I did out there was disgusting. It doesn't matter what the league does to me. The way I feel right now, you just can't describe it," he told ESPN of his stomping episode.

The monster defensive lineman served his five-game suspension and returned that season. He'd earn his first Pro Bowl selection in 2007 and signed that huge contract on the first day of free agency in the 2009 offseason.

He wrote in The Players' Tribune in 2015 about how he lost his love for the game in Washington. Redskins head coach Mike Shanahan told him he wanted him to practically eat up space. He also tells of how his financial advisor pissed away his money.

Put Albert Haynesworth in your prayers right now. He needs them. pic.twitter.com/2zraqUY20I

Now, Haynesworth's health is declining. The 38-year-old said his kidneys were failing in 2019 and that he was seeking a donor. What's sad is that despite his terrific career, he may always be remembered for the one play of him stomping his cleat on a player's face.