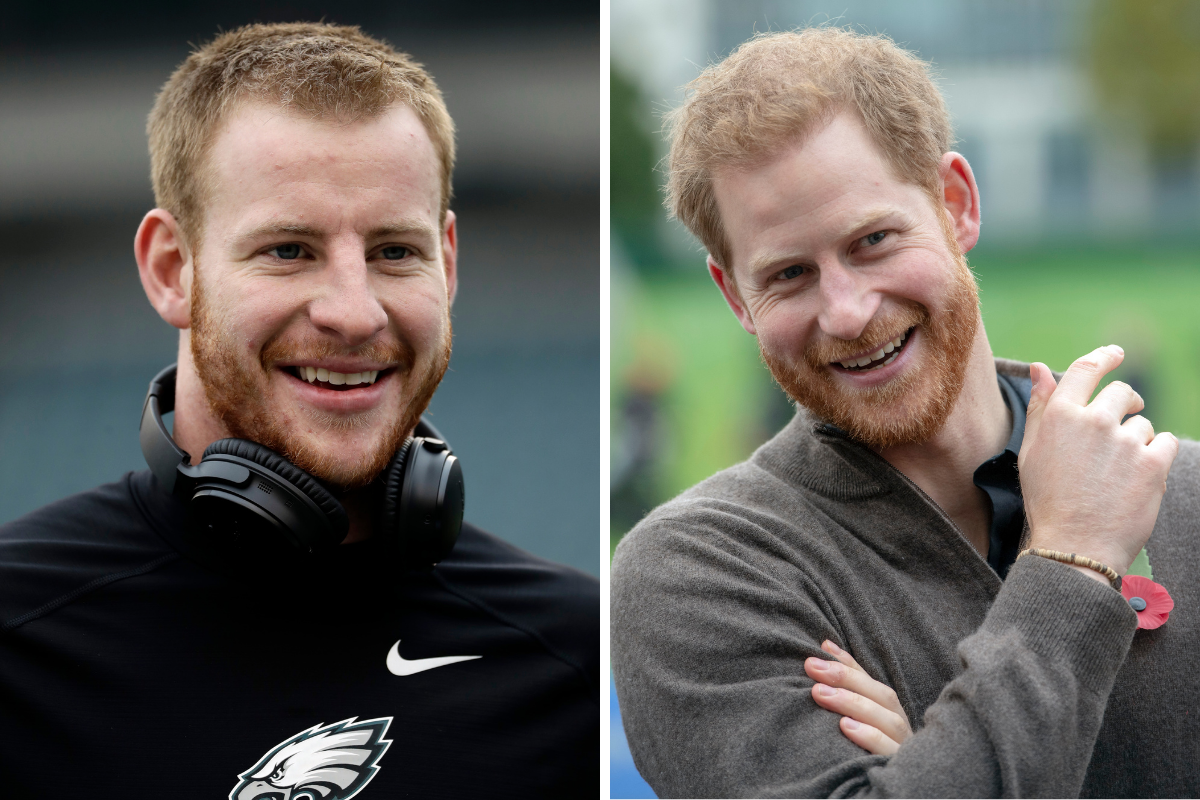 We all love to see a good athlete doppelgänger.

Who could forget the hilarious Klay Thompson lookalike spotted courtside at a Warriors game, or the fans who caught the attention of Luka Doncic and Odell Beckham Jr. due to their strikingly similar appearances?

Well, perhaps the most astonishing doppelgänger pairing of all is that of Philadelphia Eagles quarterback Carson Wentz and British royalty Prince Harry.

The two red-haired studs live wildly different lives, yet the resemblance between the two is borderline uncanny.

ICYMI: The #Eagles and Carson Wentz agreed to terms on a four-year contract extension through 2024, adding to this already incredible #ProBison highlight reel. pic.twitter.com/8Bt0RJgoAp

RELATED: How Did Andy Dalton Earn His ?Red Rifle? Nickname?

Carson Wentz grew up in North Dakota, though he was born in North Carolina. He attended Century High School in Bismarck, ND, before enrolling at North Dakota State University, where he starred at quarterback.

After his career in Fargo, Wentz entered the 2016 NFL Draft and was selected by the Philadelphia Eagles with the second-overall pick.

Since moving to Philly, Wentz has cemented himself as the team?s starter in what has been and up-and-down career. Wentz has battled injury as the Eagles quarterback which has forced him to miss multiple games, including the team?s Super Bowl LII victory against Tom Brady and the New England Patriots.

Since Wentz arrived in 2015, the Eagles have won the NFC East twice and made the playoffs three times.

Across his playing career, a healthy Wentz has seen himself burst into the MVP conversation, though his inconsistency to throw touchdowns has left football fans frustrated at times.

On this day, two years ago: 27th of November 2017, Prince Harry and Meghan Markle announced the news of their engagement, later becoming Their Royal Highnesses The Duke and Duchess of Sussex! They have since celebrated their wedding anniversary and welcomed their son, Archie, into the world ❤️ • Photo © PA / Alexi Lubomirski / Chris Allerton © SussexRoyal

Prince Harry?s life has been vastly different to that of Wentz. The Duke of Sussex, son of Prince Charles and Princess Diana, is sixth in the line of succession for the British throne. He received education from the Wetherby School, Ludgrove School, and Eton College and was trained as an officer at the Royal Military Academy in Sandhurst.

Prince Harry, 36, married American actress Meghan Markle in a globally televised royal wedding in 2018, and the couple have a son, Archie Mountbatten-Windsor, who was born in 2019. Markle and Prince Harry share an Instagram account. The pair frequently post pics of them on social media at important meetings, traveling the world or just settling down for some family time.

The pair recently relocated to Los Angeles, but have opted to settle down in San Bernadino. Perhaps once the coronavirus pandemic and COVID-19 outbreak settle down, the royal couple will make a trip to catch a Rams game or even go up state to San Francisco for a 49ers game.

Perhaps the Dodgers and Lakers should prepare to have some royalty in attendance next year if the family opt to take a trip to an MLB or NBA game.

"It’s one of those things where every week we just come in ready to work."

The similarity in appearance between Wentz and Prince Harry is so striking, that even the Philadelphia Eagles themselves had some fun with it.

Following a win against the Chicago Bears in 2017, the Eagles official Twitter account shared an image of Wentz discussing the team?s success. The only issue was that it was actually a photo of Prince Harry dressed in a suit and tie.

Talk about a doppelgänger. Has anyone ever seen these two in the same room together? Not only does their hair color match to a tee, they have extremely similar facial features and boast almost identical facial hair.

Just look at this side-by-side pic of the two, it’s remarkable how much they look alike.

If Prince Harry ever decided to slip on Wentz’s uniform and rock his helmet, deciphering the difference between the two could present even more of a challenge. Maybe if Harry stepped in for a game against the lowly defenses of the New York Giants, Houston Texans, or Atlanta Falcons, he could make some magic happen on the field.

Let’s just hope no one drafts Harry instead of Wentz in Fantasy Football.

For now, the real Carson Wentz will remain under center in Philly as the Eagles look to make a run in the NFC East and reach the playoffs. They’ll need to snap their current poor run of form that saw them lose to the Pittsburgh Steelers and Baltimore Ravens and then get through the likes of the Green Bay Packers, Dallas Cowboys and Washington Football Team.