The Dallas Cowboys have had so many great players that it's almost dizzying to look back on the list. Troy Aikman, Emmitt Smith and Michael Irvin -- also known as "The Triplets" -- turned America's Team into a dynasty in the 1990s. From Jason Witten and Deion Sanders to Demarcus Ware and Tony Romo, Dallas has had no shortage of star power on the gridiron.

The best of all of them, however, might have been Roger Staubach, the only Cowboys QB we celebrate on Veterans Day. Before he made the term "Hail Mary" commonplace for last-second heaves into end zones, he was a complete military badass. And he probably would've ranked ahead of Aikman and Romo on the Dallas Cowboys list of all-time greatest quarterbacks if he didn't complete a tour of duty.

Staubach did what so few NFL players and coaches do. He put his entire football career on hold to serve in the Navy during the Vietnam War. But what's incredible is that even after his stint overseas, Staubach still landed in the Pro Football Hall of Fame.

Many take a leave of absence.

Most don't wind up being one of the best quarterbacks to ever grace the field in the NFL.

Alabama legendary coach Bear Bryant once turned down a head coaching job to serve in the U.S. Navy. Former Crimson Tide running back Glen Coffee retired from the National Football League to pursue a career in the Army.

Staubach's path from Annapolis to Vietnam and eventually Canton is one of the more honorable ones the league has seen.

A Heisman in Uniform 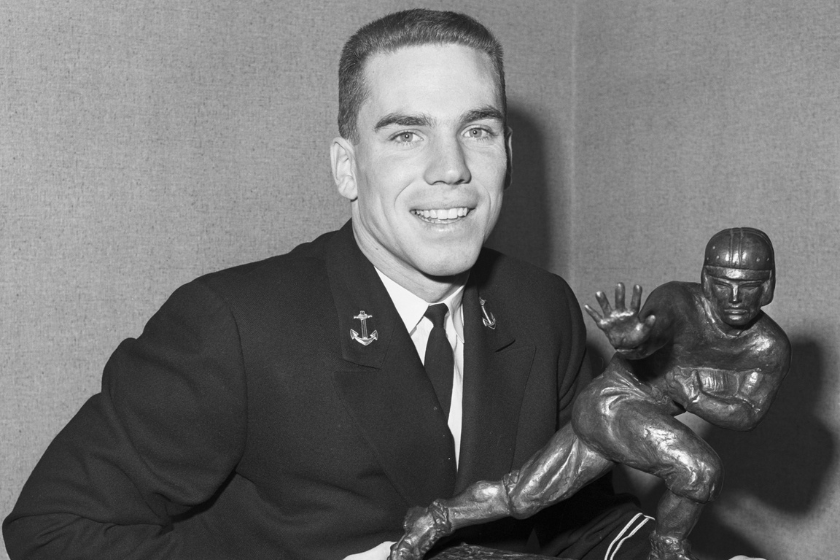 "Roger the Dodger" was born in Cincinnati, Ohio, and attended Purcell High School there. After graduating, he spent one year at the New Mexico Military Institute before transferring the U.S. Naval Academy in Annapolis, Maryland.

Staubach quickly became a rising star for the Navy Midshipmen. As a sophomore in 1962, he took over starting signal caller duties before taking Navy to new and unprecedented heights in 1963.

The 6-foot-3 hurler won the Heisman Trophy award for passing for more than 1,700 yards, rushing for another 300 and leading the Midshipmen a 9-1 record and a trip to the national championship Cotton Bowl against Texas, which they lost.

Still, he took down the mighty Notre Dame Fighting Irish. Navy didn't beat their rival again for another 44 years.

Staubach won the Maxwell Award and Walter Camp Memorial Award and was even featured on the cover of Time Magazine in October following his unanimous All-America season.

There hasn't been a Heisman Trophy winner from a military academy since Staubach's NCAA days. He was undoubtedly one of the best college football players of all time. 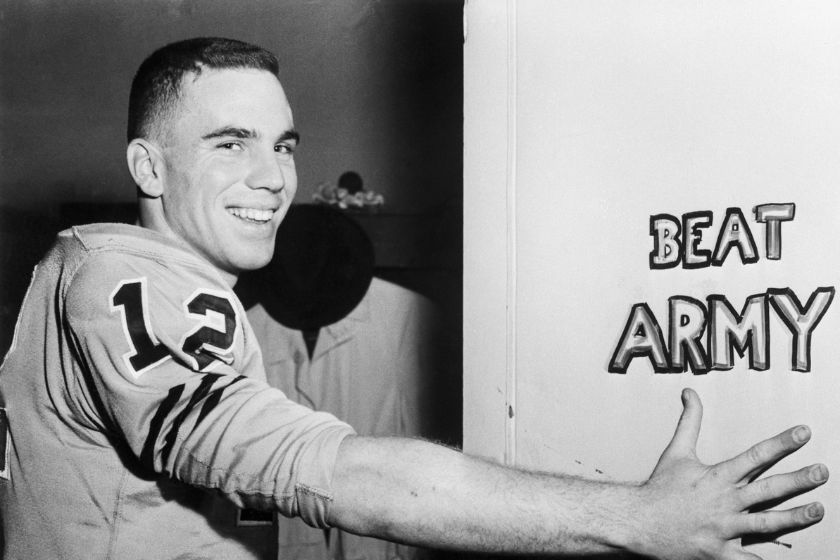 While still at the Naval Academy, Staubach discovered he was color blind. This meant he was commissioned to the Supply Corps, where differentiating between colors like red and green wasn't needed.

Staubach didn't let that impede him.

After graduating from the academy in June 1965, he volunteered for a one-year tour of duty in Vietnam. He served as a supply corps officer at a base providing relief for Da Nang Air Base. Da Nang is the city where the first waves of U.S. troops landed in March 1965.

Staubach served in Vietnam until 1967. By then, hundreds of thousands of United States soldiers and Marine Corps were fighting in the war while huge protests took place in America.

"Anytime somebody starts talking about quarterbacks, tough quarterbacks, you have to remember one thing: Roger Staubach was in Vietnam," former Dallas Cowboys linebacker Thomas Henderson told 247Sports. "Name me another quarterback who has been in Vietnam, then you can talk to me about the greatest quarterback of all-time."

The Dallas Cowboys selected Staubach in the 10th round of the 1964 NFL Draft as a "future" selection. The Kansas City Chiefs of the American Football League also drafted him as a future selection in that league's draft.

Staubach joined the Cowboys in 1969, four years after he graduated from the Naval academy, but coach Tom Landry didn't replace starting quarterback Craig Morton with Staubach until 1971. A Week 8 victory over the St. Louis Cardinals was the first of 10-straight wins Staubach engineered, including a 24-3 win over the Miami Dolphins in Super Bowl VI in 1972. He won Super Bowl MVP in the game.

Staubach helped turn the Cowboys into the NFC empire they are today. They went to the playoffs in 10 of his 11 seasons, and he went 11-6 in postseason games. He guided the team to four Super Bowls, two of which he lost to the Pittsburgh Steelers (1975 and 1978).

With nicknames like "Captain America" and "Captain Comeback", Staubach became the face of the franchise and completely owned the role. He made Texas Stadium -- where the Cowboys played until AT&T Stadium was built in 2009 -- the absolute place to be. Much like how Joe Namath basked in the New York spotlight, Staubach did the same in Dallas.

The rocket-armed athlete would go on to win one more Super Bowl in Dallas in 1977, taking down the fearsome Pittsburgh Steelers, who defeated the Baltimore Colts on their way to a Super Bowl appearance. Staubach's career saw him finish with 22,700 passing yards, 2,264 rushing yards and 173 total touchdowns across 11 seasons. The Dallas Morning News named the six-time Pro Bowl player the best passer in franchise history.

Staubach retired following a string of concussion late in his career, but there's no doubt he was one of the best to ever do it, whether that was scrambling for touchdowns or serving overseas.

"Roger Staubach might be the best combination of a passer, an athlete and a leader ever to play in the NFL," Tom Landry told the Richland Source.