How Would the 1990s Dallas Cowboys Stack Up Against the 2000s Patriots? 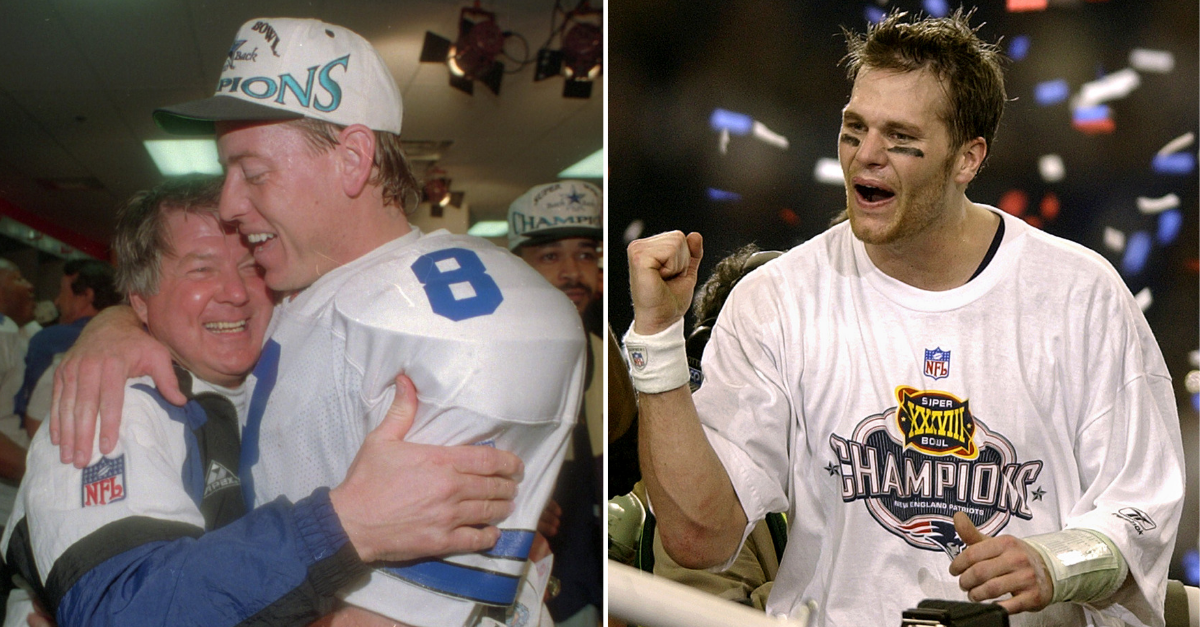 You know a dynasty when you see one. The “Steel Curtain” Pittsburgh Steelers ruled the NFL in the 1970s. Nick Saban’s Alabama football team has owned college football in the 2010s. The rest of the NBA bowed down to Michael Jordan’s Chicago Bulls in the 1990s.

What happens if we pit two dynasties against each other, like the 1990s Dallas Cowboys and the 2000s New England Patriots? Both franchises won three Super Bowls in the span of four years in their respective decade and include Hall-of-Fame talent like quarterbacks Tom Brady and Troy Aikman.

In one corner we have the Cowboys. America’s Team was constructed off great NFL draft picks and head coach Jimmy Johnson?s haul for Herschel Walker in the worst trade in NFL history. In the other is the Patriots. They were built on drafting and developing players (like Brady in the sixth round) while signing key free agents.

The Cowboys ruled the NFC East. The Patriots owned the AFC East.

To truly determine which was better, let’s break down some positions in a head-to-head format. I’ll start on offense, sum up the defenses and end with the head coach. OK, let’s get to it:

With a high-flying offense and championship experience, the Rams were heavy favorites against the unproven @Patriots.

But Super Bowl XXXVI did not go the way people expected. (Feb. 3, 2002) pic.twitter.com/uoPrBeIOWj

When all is said and done, Patriots quarterback Tom Brady is going down in history as the greatest quarterback to ever play the game. He already is. The six-time Super Bowl winner and four-time Super Bowl MVP brought the franchise’s first-ever championship to Foxborough, Massachusetts in 2001 and hasn’t slowed down since. The only quarterback that gave him a scare in 2018 was Kansas City Chiefs quarterback Patrick Mahomes.

Aikman won 90 games with the Cowboys and took them to the playoffs in eight of his 12 seasons. He was named MVP in Super Bowl XXVII after passing for 273 yards and four touchdowns in a 52-17 stomping of the Buffalo Bills.

Brady is the GOAT, though. It’s hard to pick against him.

Michael Irvin headlines this group. “The Playmaker” put up seven seasons of 1,000 receiving yards from 1990-1999 and hauled in 58 touchdowns over that span in Arlington, Texas. In Super Bowl XXVII, Irvin tallied seven catches for 114 yards and two touchdowns in what was one of his greatest postseason performances.

Deion Branch and Troy Brown were Brady’s main pass-catching weapons. Branch totaled 1,200 yards and seven touchdowns in the regular season between the 2003 and 2004 seasons but shined in the postseason. The 2002 second-round pick tallied 276 yards and a touchdown on 21 receptions between the 2003 and 2004 Super Bowls, earning Super Bowl XXXIX MVP honors for his record-tying 11-reception game in New England’s 24-21 win over the Philadelphia Eagles.

Branch was playoff beast, but I’d take Irvin any day.

Emmitt Smith is one of the greatest running backs of all time. NFL’s all-time rushing leader ran for at least 1,000 yards every season from 1991-2001, eclipsing 1,400 yards in five consecutive seasons. The former Florida Gator great was also named Super Bowl XXVIII MVP for a stellar 132-yard, two-touchdown performance.

The Patriots had a couple different running backs during their dynasty. Antowain Smith took the hand-offs 2001-03 and put up a 1,000-yard rushing season in 2001. Corey Dillon came over from the Cincinnati Bengals from 2004-06 and gained more than 3,000 yards over his three seasons.

This one wasn’t really a fair fight.

Before Jason Witten became one of the elite all-time Cowboys, there was Jay Novacek. A free agent signing in 1990, Novacek was a Pro-Bowler in five straight seasons and garnered 3,500 yards and 22 touchdowns over six seasons in Dallas. Back injuries derailed his career, but the former University of Wyoming star was an integral part of the Cowboys dynasty.

Christian Fauria and Daniel Graham combined to catch 110 passes for 1,253 yards and 15 touchdowns from Brady over the 2003 and 2004 seasons. Neither spent more than five years in New England, however.

Give me Novacek in any third-and-medium scenario.

Larry Allen made left guard look like a skill position on this drive 😳😳😳 (via @nflthrowback) pic.twitter.com/UiKugFvzoj

Brady was sacked 130 times over the Pats? four-year dynasty, while Aikman was sacked just 72 times from 1993-96. There?s not an exact science in grading this position, because some signal callers are more elusive than others. Plus, the Cowboys were a top-five rushing team in three of those four years, and New England never cracked that threshold. Of course, Smith is a big reason for that.

Rather than debate myself, I?ll let the accolades speak for the offensive lines. Led by tackles Nate Newton and Erik Williams and Hall of Fame guard Larry Allen, the Cowboys earned more than 10 different Pro Bowl selections from offensive linemen from 1993-1996. The Patriots lone offensive line Pro Bowl pick? Damien Woody in 2002.

On this date in 2004, Adam Vinatieri added to his legend with the kick that won Super Bowl XXXVIII 😤

Adam Vinatieri was as clutch as a kicker can be for the Patriots. He?s one of the greatest kickers in NFL history. He made game-winning field goals in both the 2001 and 2003 Super Bowls, and there isn?t a player in NFL history with more postseason points than his 238.

The Cowboys had Eddie Murray in 1993 and Chris Boniol from 1994-96. While Boniol made an impressive 27 of 28 field goal attempts in 1995, Vinatieri finished with a field goal percentage of 90 percent twice during New England?s dynasty and made 263 field goals over his 10-year stay in Foxborough.

The Pats surrendered less than 17 a game in the playoffs during their dynasty run. Dallas? was more than 18.

Only two other coaches have ever won more games than Bill Belichick ? Don Shula and Georgia Halas. Nobody has as many Super Bowl victories, however. Belichick?s six rings are two more than the next closest in Pittsburgh Steelers coach Chuck Knoll.

Jimmy Johnson won titles at the University of Miami and orchestrated the trade that birthed the Cowboys dynasty, but he won just two Super Bowls in Dallas before he and owner Jerry Jones had a falling out in 1994 following a NFC Championship Game loss to the San Francisco 49ers. Johnson was replaced with longtime Oklahoma Sooners coach Barry Switzer. If Johnson stays, maybe he contests Belichick?s title record.

As far as who would win a clash between the 1990s Cowboys and the 2000s Patriots, I’ll let you decide. Would you rather have Brady or Aikman? Irvin or Branch? Belichick or Johnson? Haley or Law?

Whatever your choice, I’ll leave you with what each decade looked like under their dominance.