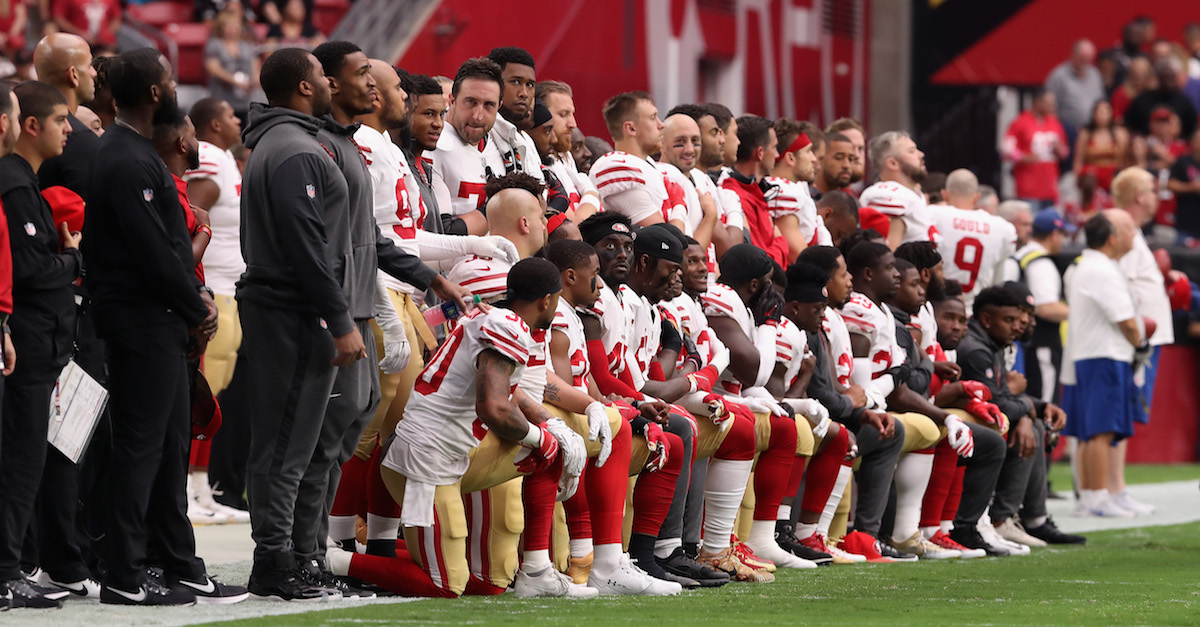 More than a year after Colin Kaepernick started national anthem protests for the San Francisco 49ers, and on the same day as many teams backed off those protests, the team made a stand “together.”

Close to 30 players knelt, while all players held hands over their hearts during the national anthem.

“At its purest level, football is a unifier of people from all walks of life, different socio-economic backgrounds, every corner of this country and around the world. As players, coaches, ownership and staff, we are privileged to work in an environment that is a tremendous example of how people can come together for a common goal. We not only put our differences aside, but we also use them to achieve that common goal by challenging each other to be better — both in our professional and personal lives.

“For more than a year, members of our team have protested the oppression and social injustices still present in our society. While some may not have taken a knee or raised a fist, we have all shared the desire to influence positive change. Today, our team chose to publicly display our unity in a new way and, in turn, urge others do the same. Our demonstration is simply a representation of how we hope our country can also come together by putting differences aside and solving its problems.

“As the majority of us have done throughout our careers, we use our platform as members of a NFL team, and our right to freedom of expression, to speak up for those whose voice is not heard. It is important that we continue to emphasize that despite our different backgrounds and beliefs, we still love each other and are truly a brotherhood. Our gesture today was an intentional effort to demonstrate that. Make no mistake, we love this great country and have tremendous respect for our military and veterans who have sacrificed so much for our right to express ourselves freely. We passionately want what is best for this country and all its citizens.

“On behalf of the San Francisco 49ers organization, we urge our fellow citizens to embrace your differences, find strength in them, and come together for the good of all.”

For the most part, teams backed off of protests one week after nearly every team had some form of protest.

Roger Goodell sent out a memo and team owners reportedly had a rejected idea ahead of the games.