Look, I get it. Not every NFL team can draft like the New England Patriots, Green Bay Packers, Houston Texans, Baltimore Ravens, Dallas Cowboys, Carolina Panthers, or Indianapolis Colts. Hell, not every team can draft like the Pittsburgh Steelers, Atlanta Falcons, or Philadelphia Eagles, apparently. And yes, maybe it works for the Rams to just pilfer other teams' best guys (Aaron Donald and Cooper Kupp notwithstanding), or for the Buccaneers to sign cast-off future Hall of Famers, but for most franchises, that isn't a sustainable route to success. If you want to make the playoffs, usually you need to hit on not just your first-round picks, but sneak in some gems in the later rounds, too. Replicating the success of Tom Brady with the 199th pick isn't likely, but you have to be able to find guys who can make a Pro Bowl or two.

Sure, "winning the offseason" is damning with faint praise, but hitting on the draft is the best way to ensure winning in the regular season, too (and anyway, that term is usually about free agency rather than draft classes). Some teams, though, just can't help themselves, getting stuck on laughably ridiculous things like the Wonderlic test or outlandish combine numbers despite a lack of NCAA production. The funniest part is how obvious the makes often are in real-time; with the exception of the NBA, there's no other sport where draft mistakes are often obvious even at the time.

So which teams top the worst, most apocalyptic draft rankings? Here are ten of them. 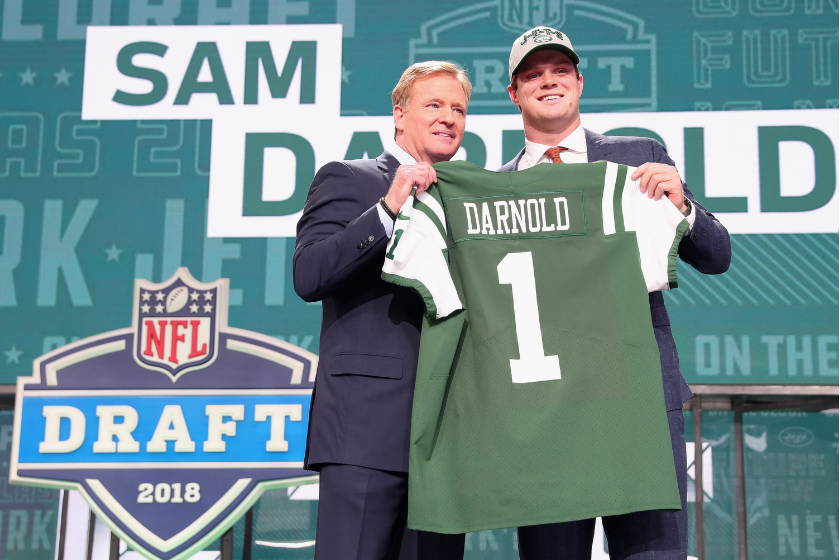 As if any other team could lead this list. Obviously, this starts with QBs; this is the team that drafted Sam Darnold at No. 3 overall and took Christian Hackenberg and Geno Smith in the second round. But it gets so much worse. Dee Milliner (No. 9 overall in 2013) was out of the league by age 24. Calvin Pryor (No. 18 overall in 2014) was gone by age 25. Vernon Gholston (No. 6 overall in 2008) is considered one of the biggest busts of all time. They once drafted a kicker (Mike Nugent) in the second round, and that's probably one of their better second-round picks. Even their good picks only work out in the short-term: Jamal Adams ( No. 6 overall in 2017) was a beast, but they traded him for pennies on the dollar. At least you can count on one thing with the Jets: their fans will always be angry at their own team for their obvious draft day screw-ups. I'm still sad they moved the draft out of New York, because watching Jets fans boo their team's pick in real-time somehow never got old. 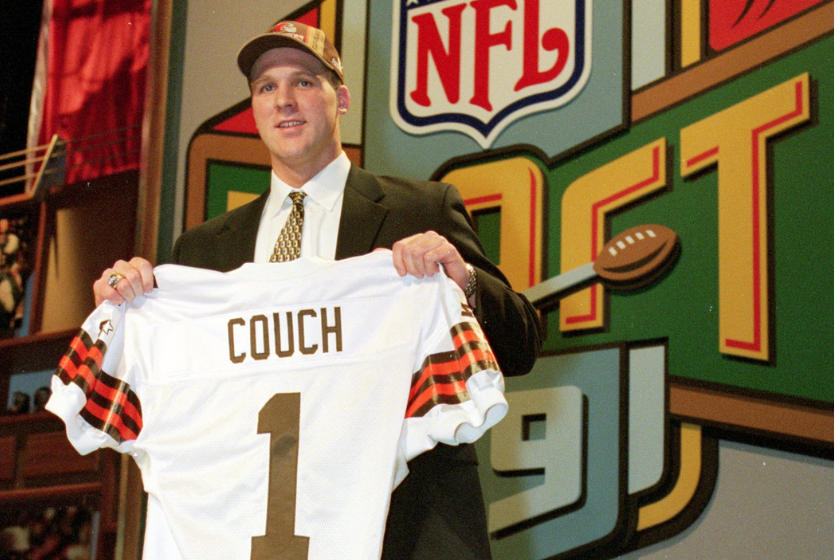 Related: Tim Couch's NFL Career Was Doomed From the Start, But Where is He Now?

For as obviously bad as the Jets are, there might not be a worse team than the Cleveland Browns. Prior to Myles Garrett in 2017, this team's drafting history is a bloodbath. This is a team that burned first-round picks on Corey Coleman, Danny Shelton, Cameron Erving, Justin Gilbert, Phil Taylor, Johnny Manziel, Trent Richardson, Barkevious Mingo, and the immortal Brandon Weeden and that's just since 2011! Richardson in particular stands out: they traded up to get him at No. 3 overall, then dumped him on the Colts a year later after it rapidly became clear he could only be their team's leading rusher if they were deliberately tanking. That also doesn't include legendary No. 1 overall busts like Tim Couch (1999) or Courtney Brown (2000). Sure, Joe Thomas and Alex Mack were hits, but you can't build a team entirely out of an offensive line, and the Browns have been pretty atrocious at drafting anything else. 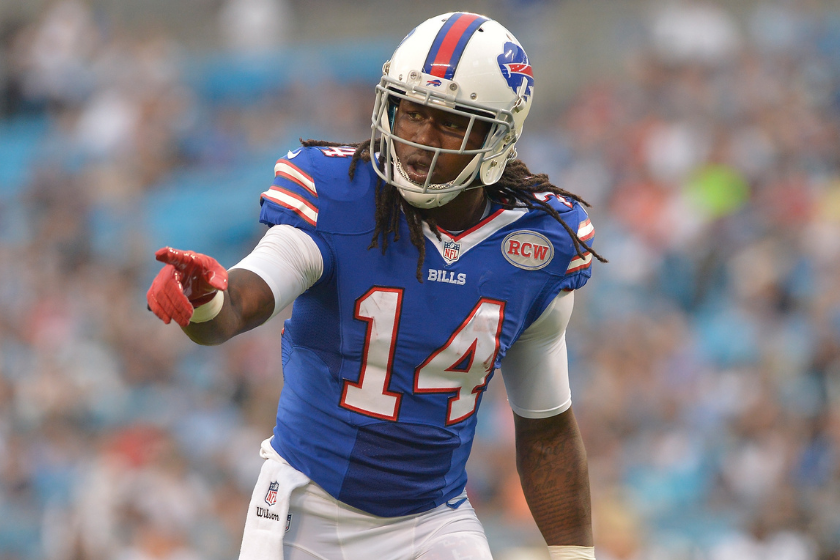 It didn't used to be like this. Once upon a time, the Bills had a case as the best drafting team in the league. This is the team that snagged Andre Reed in the 4th round in 1985, Thurman Thomas in the second round in 1988, and Darryl Talley in the second round in 1983. They didn't even miss on their high draft picks, taking Bruce Smith No. 1 overall in 1985 and Jim Kelly at No. 14 overall in 1983. Then those four lost Super Bowls happened and...I don't even know what happened with this team. Everything went to hell and suddenly they became one of the worst-drafting NFL teams in the league. Sure, taking Josh Allen in 2018 turned out to be a crazy-like-a-fox move, but that's the exception that proves the rule. There have been precious few hits since 2000, but maybe the worst pick of all of them was Sammy Watkins, the No. 4 overall pick at wide receiver who has never made a single Pro Bowl. 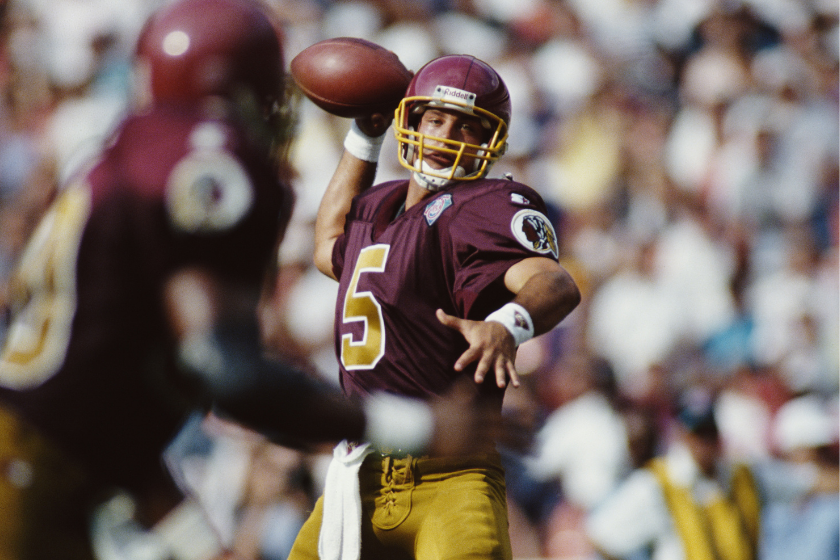 Whether you call them the Commanders or the Redskins, this team has not had a good drafting history. I can't really fault them for selling the farm for RG3 in 2012; he looked like a franchise savior until Washington's deeply stupid decisions caused his knee to detonate into a million pieces. I can, however, fault them for Josh Doctson at No. 22 in 2016, Heath Shuler at No. 3 in 1994, Desmond Howard at No. 4 in 1992 (yeah, he was a great return man, but they burned the number four overall pick in the draft on a return specialist), Carlos Rogers at No. 9 in 2005...like 90-percent of their first-rounders. Hilariously, the other 10-percent are no-doubt Hall of Famers, but that's not a good ratio! Maybe you don't need to bat 1.000 on All-Pros in the first round, but you at least need serviceable starters! Combine that with their late-round failures (you pretty much can't find any serviceable players for them since 2000 after the second round other than Chris Cooley and Alfred Morris), and this is not a team that has drafted well. 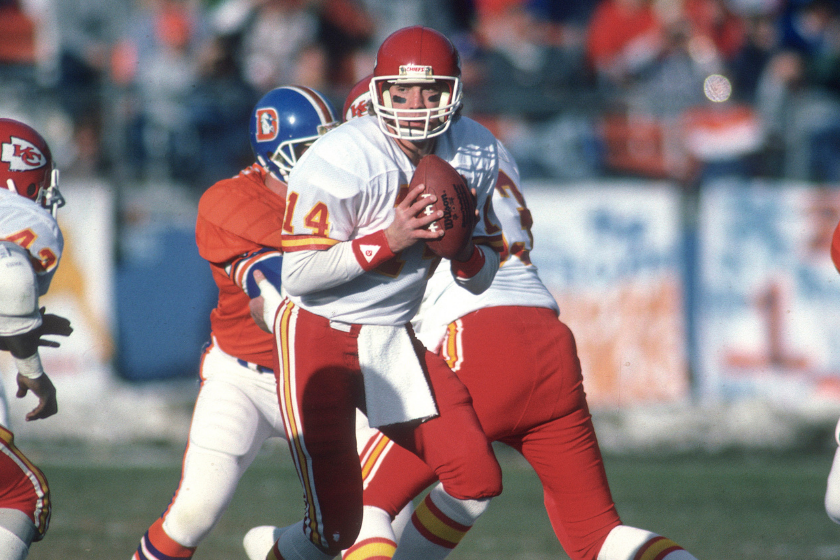 This one isn't based on recent history. The Chiefs have actually done a pretty good job in the last decade; they took Patrick Mahomes at No. 10 overall in 2017, they got Travis Kelce in the third round in 2013, and every single pick they've made before the 6th round since 2016 is still an active NFL player. It's only when you start to get back earlier in their history that it starts to get real grim, and it largely comes down to one pick so bad it sunk the franchise for a solid decade: Todd Blackledge at No. 5 overall in 1983, ahead of QBs Jim Kelly, Ken O'Brien, and Dan Marino. And sure, this is the team that took Kelce and Tony Gonzalez, but they're also the team that took Willie Scott and Ethan Horton in the first half of the first round, so even their tight end history has a dark shadow over it. 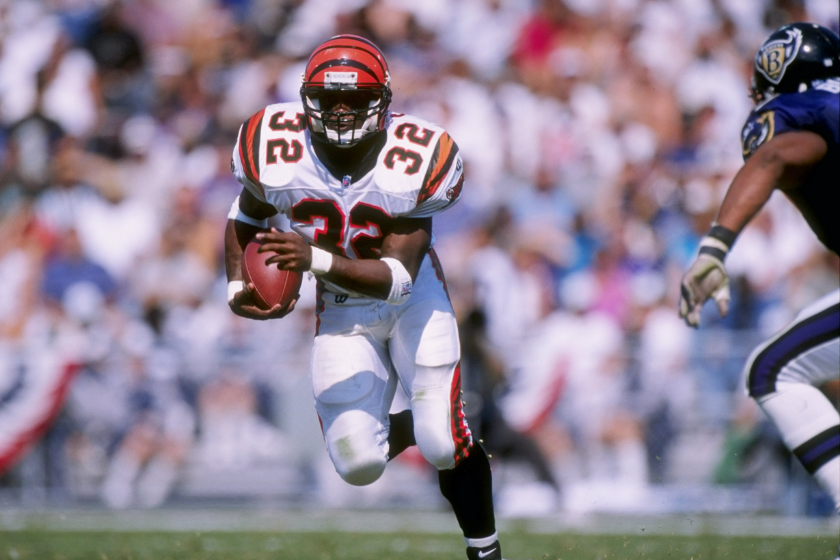 The Bengals absolutely deserve credit for their last two drafts, when they took Ja'Marr Chase and Joe Burrow because those guys are now stars. Before that, though...yikes. Sure, you have the occasional hit like A.J. Green in 2011, but Cincinnati is dramatically overrepresented on the list of biggest busts in NFL history for a reason. This is the team that spent top-six picks on Akili Smith, David Klingler, Rickey Dixon, John Copeland, and Ki-Jana Carter (No. 1 overall!). Carter has to be simultaneously the saddest and funniest story on that list: the guy's entire body self-destructed basically the minute the Bengals drafted him. 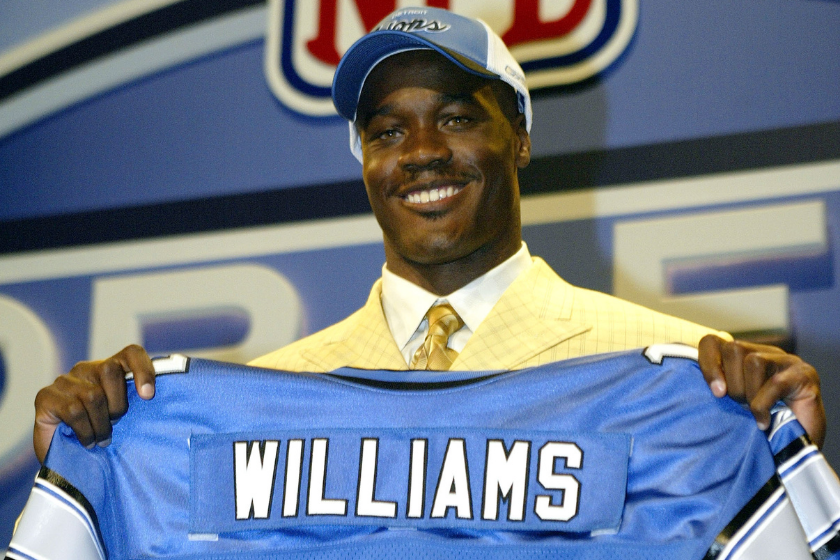 In their entire history, the Detroit Lions pretty much have two types of draft picks: a few of the best players in history at their respective positions (Barry Sanders, Calvin Johnson, Ndamukong Suh)...and everything else. They've made a lot of perplexing decisions in the NFL draft, but the funniest has to be when they picked three straight wide receivers with top ten picks from 2003-2005 (Charles Rogers, Roy Williams, and Mike Williams), all of whom turned out to be busts, then got panned two years later for taking Johnson, possibly the best pick in team history. The Lions just can't do anything right. 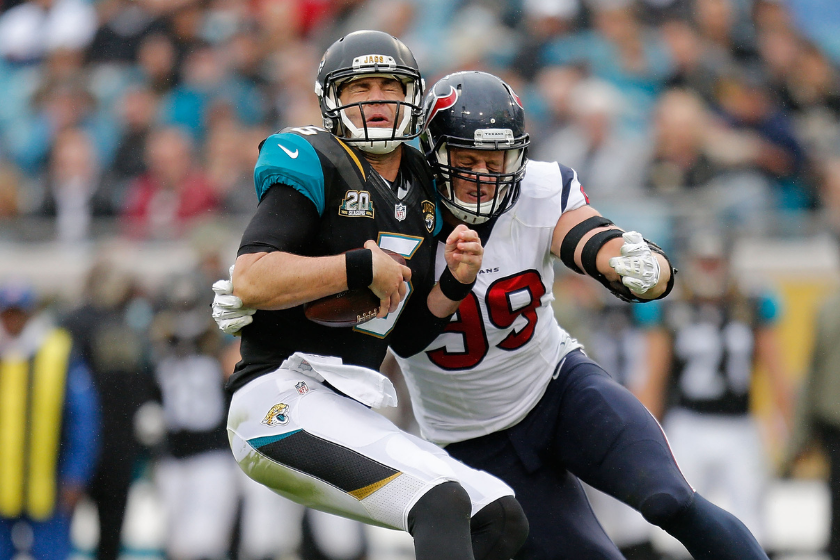 Everything about the Jaguars has been a tire fire almost since their inception, but oh my god has it been so much worse in the past two decades. Here are some players they have taken in the first round: Taven Bryan, Dante Fowler, Luke Joeckel, Justin Blackmon, Tyson Alualu, Eugene Monroe, Derrick Harvey and that's before you get to the quarterbacks. This is the team that spent first round picks on Byron Leftwich, Blaine Gabbert, and Blake Bortles, a player so bad The Good Place spent a solid four seasons making jokes about him. Trevor Lawrence must have screamed in horror when they called his name first overall in 2021. 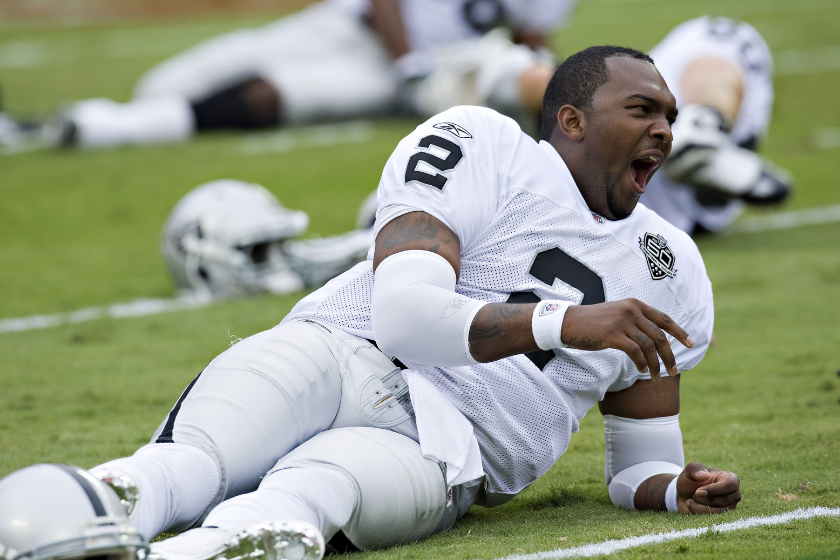 Kolton Miller, Damon Arnette, Johnathan Abram, Clelin Ferrell, Henry Ruggs, Karl Joseph...the Raiders' recent draft history is an absolute toilet fire. Their history before that isn't much better; lineman Robert Gallery and linebacker Rolando McClain were huge busts, and JaMarcus Russell has a strong case as the single worst draft pick in NFL history. Hilariously, the few times the Raiders take a good player, like Amari Cooper or Khalil Mack, they wind up trading him to another team for draft picks...which they then blow on further busts. There's a reason the last time this team won a Super Bowl was 1983. Why on Earth did we ever think John Gruden was a decent head coach, let alone allow him to be a GM? 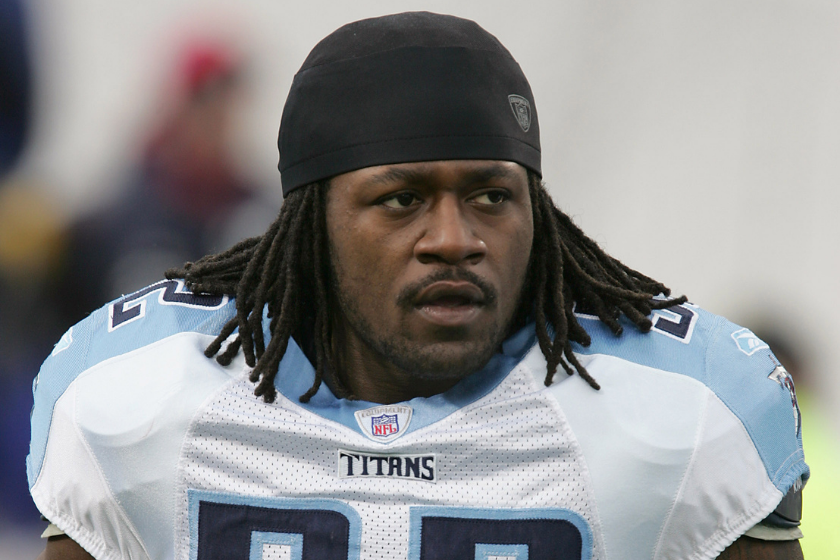 Do I need to say anyone besides Pacman Jones? Ok, fine. The Titans drafting history is just extremely not good. Sure, Derrick Henry in the second round in 2016 was a masterstroke...but that was one year before they took Marcus Mariota at No. 2 overall. The Titans have a great history of drafting running backs (Eddie George, Chris Johnson, Henry, Earl Campbell, heck, even LenDale White had a couple of good years), but their quarterback history in particular has been a disaster since Steve McNair; in addition to Mariota, they also picked Vince Young and Jake Locker in the top ten. They took Isaiah Wilson 29th-overall in 2020 and his pro career lasted all of three snaps has to be some kind of record. 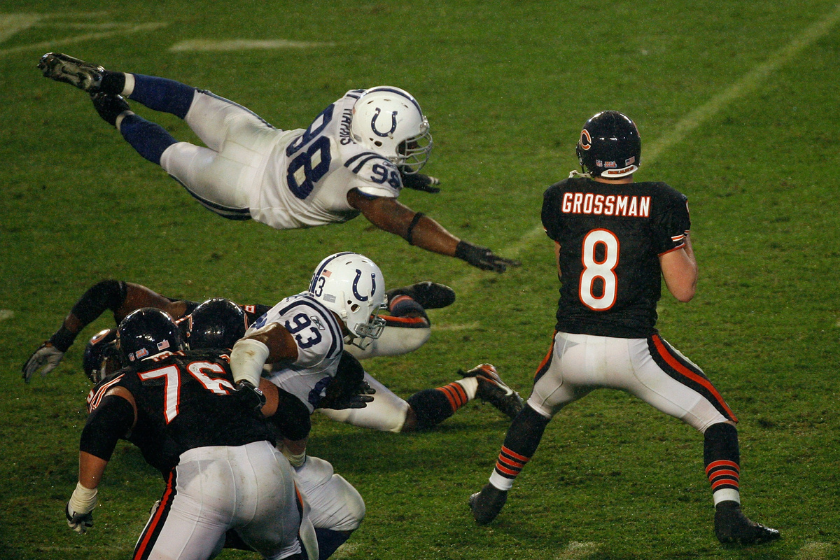 Related: How the Mitch Trubisky Trade Became One of the Most Puzzling in Draft Day History

I have one name for you: Mitchell Trubisky. Oh wait, I have a second name for you: Cade McNown. Oh and a third: Rex Grossman. Never, ever trust the Bears to draft a QB in the first round (it's not looking great for Justin Fields). Or any other time (Kyle Orton, anyone?). A lot of the Bears' failures in the last decade have to do with luck. Kevin White should've been a star if not for injuries, but you're not helping yourself by taking Gabe Carimi or Shea McLellin. Incredible factoid: since 1984, the Bears have drafted ONE guy who's now in the Hall of Fame (Brian Urlacher). The Baltimore Ravens have only existed since 1996 and they've taken three (and it's only a matter of time before Terrell Suggs becomes the fourth).