Multiple generations of NFL fans have at least some memory of Vinny Testaverde.

Granted, that's what happens when you play in the NFL for a whopping two decades like he did. Testaverde was playing quarterback into his mid-40s before Tom Brady made it cool.

After a long NFL career with teams like the New York Jets, Tampa Bay Buccaneers and Cleveland Browns, the 57-year-old has kept busy despite hanging up the cleats in 2008 and kept his net worth impressive enough to stay retired.

Related: Vince Wilfork Won 2 Super Bowls, But Where is He Now?

He served as the backup when the Hurricanes broke through and won their first national championship in 1983. By 1985, he had taken over as the starting quarterback. He threw for 26 touchdowns against nine interceptions his senior season to lead Miami to an undefeated regular season. Testaverde emerged as the Heisman Trophy winner that season, absolutely dominating the voting in 1986.

Testaverde stayed in Florida and became the first-overall pick in the 1987 NFL Draft when the Tampa Bay Buccaneers selected him.

He had an inauspicious start to his career. In his first full season as a starter in 1988, Testaverde threw a staggering 35 interceptions, a number so large it would make Jameis Winston wince. Over six seasons with the Bucs, Testaverde never threw more touchdowns than interceptions. Perhaps it isn't surprising that Tampa Bay let him become a free agent after the 1992 season.

Testaverde signed with the Cleveland Browns, where he finally posted his first season with more touchdowns than interceptions. When the Browns became the Baltimore Ravens, Testaverde went along for the ride.

In the first season in Ravens history, Testaverde arguably put together the best season of his career. He led the NFL with 4,177 passing yards and 33 touchdowns and made the Pro Bowl in 1996. In 1998, he joined the New York Jets and made his second and final Pro Bowl. That year, the former first-overall draft pick led his new team to the AFC Championship Game, which they lost to John Elway and the Denver Broncos.

The one-time Heisman Trophy winner had a couple strong seasons with the Jets, including leading them to the "Monday Night Miracle" win over the Miami Dolphins in 2000. In 2001, he spearheaded five fourth-quarter comebacks and another playoff appearance. Unfortunately, the Jets lost to the Raiders.

Testaverde spent one season with the Dallas Cowboys in 2004, hopped back to the New York Jets in 2005 and then received spot work in three games for the New England Patriots in 2006.

In his final season, the 43-year-old Testaverde was signed by the Carolina Panthers. He made six starts and played until he turned 44, setting NFL records of the age-related variety. Testaverde finally retired from the NFL after the 2007 season, 20 years after the Tampa Bay Buccaneers drafted him. In fact, his final game with the Panthers came against those same Bucs.

He finished his NFL career with more than 46,000 passing yards, 275 touchdowns and 267 interceptions.

Where is Vinny Testaverde Now? 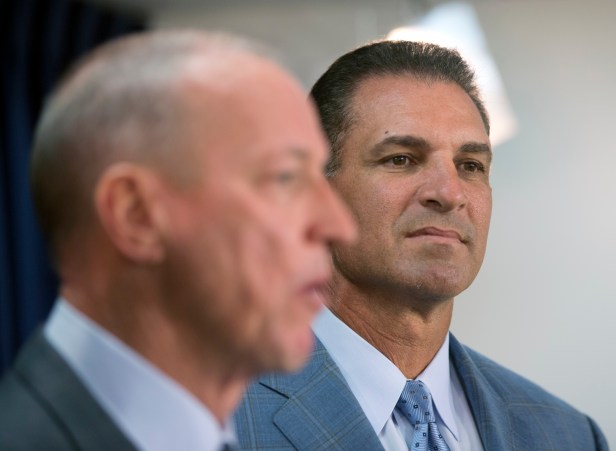 Unlike some former players, Testaverde didn't get into coaching after leaving the NFL.

He did spend some time as a high school quarterback coach for his son, Vincent Testaverde Jr. The younger Testaverde played for SUNY Albany, Texas Tech and Miami in college and signed as an undrafted free agent with the Tampa Bay Buccaneers in 2019. He didn't stick with the team after training camp and in 2020 signed with the BC Lions the Canadian Football League.

The New York Jets team website caught up with Vinny Testaverde about life after football in 2019. He told the team he's been busy investing his money.

"I'm an active investor in different things. I've been in some restaurant deals with some big companies that have gone well and it has helped me to stay retired," he said.

Testaverde currently lives in Tampa, Florida with his wife, Mitzi. In addition to his football-playing son, he has two daughters named Alicia and Madeleine.

Vinny Testaverde has more passing yards and passing touchdowns in the NFL than any other eligible quarterback not in the Pro Football Hall of Fame. He will likely never make it, given the number of interceptions he threw and the lack of a Super Bowl ring.

Two Pro Bowl appearances is good, but many NFL quarterbacks have made more. His franchise records with the New York Jets are impressive, but his records with the Bucs are more of the interception-based variety.

Then again, his time with the University of Miami got him a spot in the College Football Hall of Fame. These days, Vinny Testaverde seems content with being a family man and a father/mentor to his quarterback son.

More: What Happened to Warren Sapp and Where is He Now?