An NFL rivalry has been taken way too far, and one player is outraged 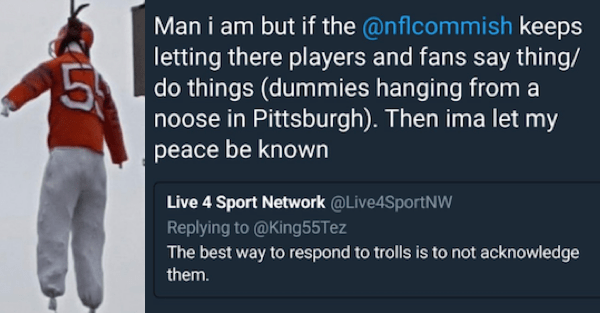 The rivalry between the Cincinnati Bengals-Pittsburgh Steelers has reached uncomfortable levels of ugly, resulting in a dummy allegedly hanging in a Vontaze Burfict themed shirt from a noose.

Vontaze Burfict "dummy" hanging from a noose in Pittsburgh. I don't care how you feel about Burfict – this is absolutely appalling and uncalled for. Stay classy, Steelers fans. (@King55Tez) pic.twitter.com/pVmiCN3ent

The picture was shared and Burfict has responded, specifically pointing to the noose incident in Pittsburgh.

Burfict’s history with the Steelers is checkered.

He was taken out by Juju Smith-Schuster weeks ago with a nasty crackback block.

That came after Burfict claimed Steelers wideout Antonio Brown faked a concussion in the prior season’s playoffs following one of many dirty hits.

Burfict has taunted fans (here and here), stomped on Pittsburgh’s fullback, attempted to take out his teammate in practice, stepped on LeGarrette Blount’s leg as a member of the Patriots, nearly took out Ben Roethlisberger and injured Le’Veon Bell all within the last two years.

Bell later noted Burfict needs to be out of the NFL.

Regardless of how you feel about Burfict, implying someone should be hung from a noose is absolutely uncalled for.