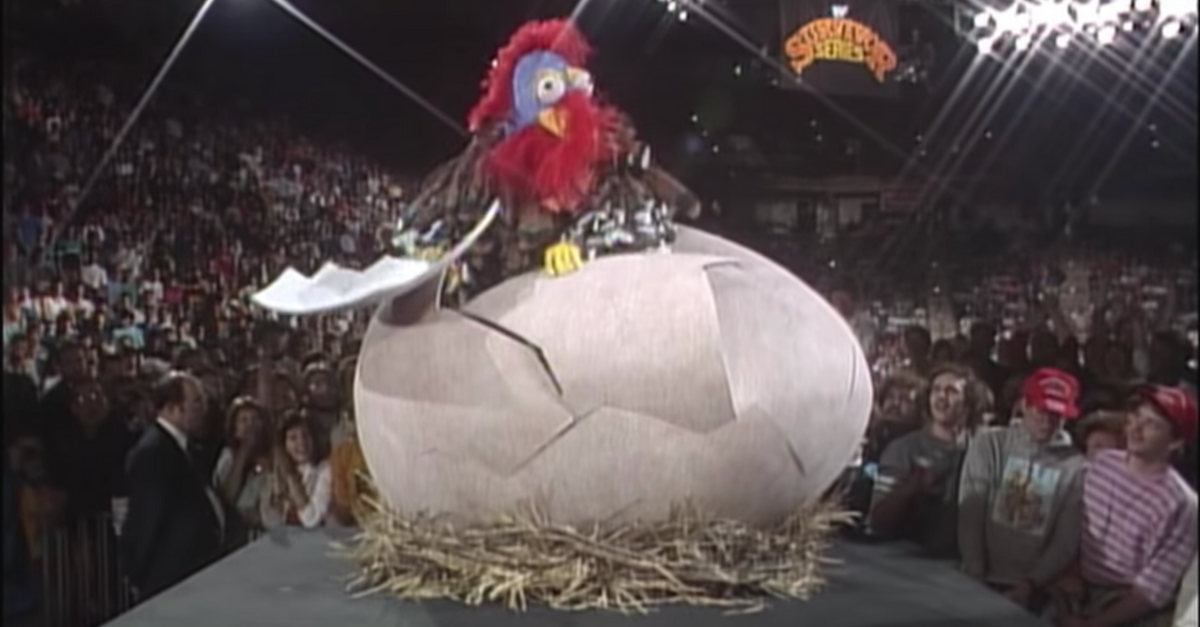 Leading up to Survivor Series, WWF promoted a giant egg at their live events. This caused major speculation of what is inside the egg, and numerous stories have materialized over the years regarding who people thought was inside.

At the Survivor Series, on November 22, 1990, the egg was presented and speculating fans inside the Hartford Civic Center waited in anticipation for it to be hatched.

All of a sudden, the egg hatched, and the anticipation came crashing down with a person in a turkey costume was unveiled. This “turkey” mascot became known as The Gobbledy Gooker.

On top of Gorilla Monsoon, Roddy Piper, and “Mean” Gene Okerlund doing their best to not make this segment a total bust, pro wrestling fans in attendance were booing at what they were witnessing. No storyline development, no returning wrestler, no new superstar debuting — just a giant turkey flapping his wings.

Thankfully, this was the same event that marked the pay-per-view debut of The Undertaker, who became one of the longest tenured and most popular characters in WWE history. However, the disappointing segment led to absolutely nothing else outside of what occurred at Survivor Series.

Who Was Under The Gobbledy Gooker Suit?

RELATED: Hulk Hogan?s ?Real American? is a Classic, But It Was Meant for Someone Else

Interestingly, the person under The Gobbledy Gooker suit was Hector Guerrero, member of the legendary Guerrero family, brother of Eddie Guerrero and uncle of Chavo Guerrero, Jr.

In a 2016 interview with Sports Illustrated, Guerrero stated that although the segment was “the biggest flop in professional wrestling history,” it was meant for the children, not the adults. He also admitted that he was in a bad situation, but he blames himself and not Vince McMahon.

Guerrero added on the overall perception of The Gobbledy Gooker debacle.

Even being widely perceived as the worst gimmick in the history of WWE, The Gobbledy Gooker returned as a participant in the Gimmick Battle Royal at WrestleMania 17. The Gooker was not able to win the match, but former WWE Champion The Iron Sheik was the last man standing.

The Gooker returned on other occasions as well. In 2008, former WWE talent The Boogeyman appeared in the costume. A year later, on an episode of Raw, former WWE Diva’s Champion Maryse was under the costume, as she attacked Melina. Both Xavier Woods and Jey Uso have also donned The Gooker costume on SmackDown. It’s no secret as to why other wrestlers were more popular for Halloween costumes.