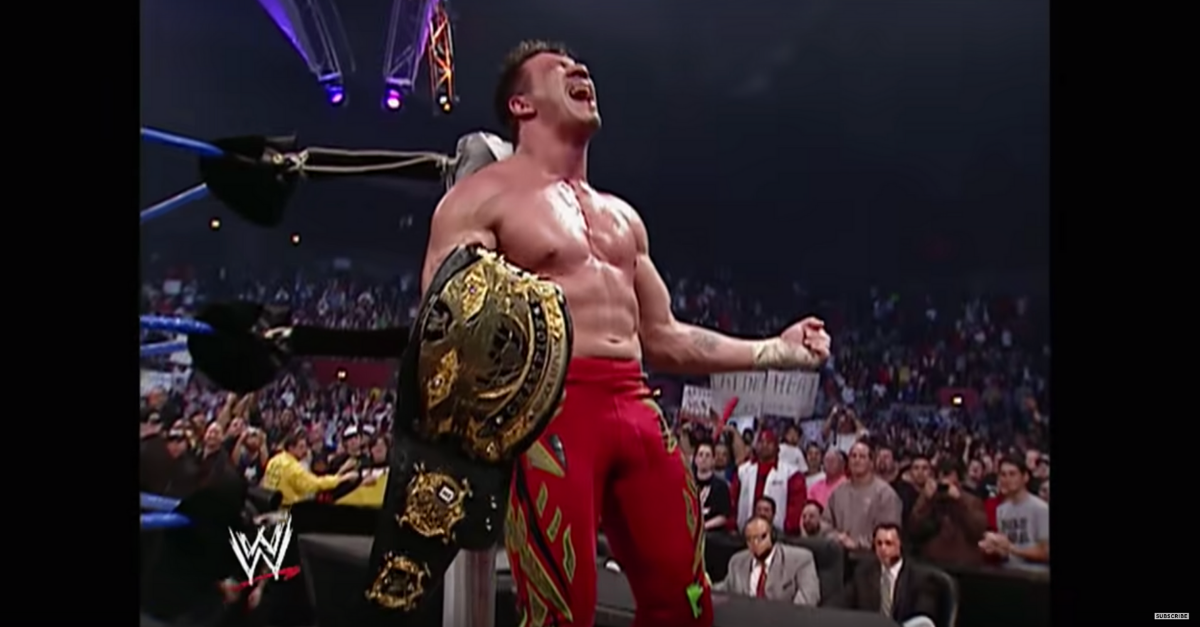 Eddie Guerrero, born Eduardo Gory Guerrero Llanes, is one of the greatest underdog stories in WWE history. For several years, the El Paso, Texas native spent his wrestling career competing in the style of lucha libre in Mexico, followed by short stops in the American Wrestling Association (AWA) and the National Wrestling Alliance (NWA). He then took his talents to New Japan Pro Wrestling (NJPW), having notable matches against Jushin “Thunder” Liger and the Pegasus Kid (Chris Benoit). Even during his time in Japan, Guerrero maintained creating a legacy in Mexico, competing for promotions including CMLL, AAA, UWA, and EMLL.

After nearly 10 years competing for Mexico and Japan, Paul Heyman gave Guerrero an opportunity to compete on United States soil on a more permanent basis. In fact, Guerrero immediately received a push when he debuted for the Extreme Championship Wrestling (ECW) promotion, defeated 2 Cold Scorpio to win the ECW Television Championship. Along with Scorpio, Guerrero had memorable matches with Dean Malenko, as well as teamed up with Taz and the Steiner Brothers.

The Rise of Eddie Guerrero

The same year, in 1995, Eric Bischoff saw the momentum of Guerrero and signed him to World Championship Wrestling (WCW). Guerrero was instrumental in bringing mainstream notoriety to the Cruiserweight division on WCW Nitro and Thunder, but also won the United States Championship after defeating DDP at Starrcade 1996. Guerrero was also the leader of the Latino World Order (LWO) stable, which was a heel group during the nWo phenomenon in WCW. Members of this group included names such as Psychosis, Juventud Guerrera, Hector Garza, and Silver King, and Rey Mysterio, Jr., who was forced to join the group during his feud with Guerrero.

Eddie made his WWF debut in 2000, along with Chris Benoit, Dean Malenko, and Perry Saturn, forming The Radicalz faction. His WWE run was the most successful of his career, winning his first title just two months after his in-ring debut by defeating Chris Jericho for the European Championship. He retained the title for nearly three months, and also gained the Intercontinental Championship the same year, defeating Kurt Angle and Chyna. Guerrero would win the IC title on another occasion, defeating Rob Van Dam at the 2002 Backlash PPV.

His on-screen romantic relationship with Chyna, which spawned his “Latino Heat” gimmick, continued to merit the interest of WWE fans, and it was a way to expand the characters of both Guerrero and Chyna. His Los Guerreros tag team with his nephew, Chavo Guerrero Jr, also helped popularized the “Viva La Raza” phrase and “Lie, Cheat, Steal” moniker.

Eddie reached the pinnacle of his career as a pro wrestler in 2004. When Benoit won the Royal Rumble and defected to Raw, which led to a triple threat match for the World Heavyweight Championship against Shawn Michaels and Triple H, Paul Heyman scheduled a 15-man SmackDown Royal Rumble to determine the number one contender for the WWE Championship. Eddie Guerrero won the match, setting up a showdown between him and champion Brock Lesnar at the No Way Out pay-per-view.

At the Royal Rumble, there was a brief staredown between Lesnar and Goldberg. During Guerrero’s match with Lesnar, Goldberg ran into the ring and speared Lesnar, leading to Guerrero executing his frog splash and win to WWE Championship in the main event of No Way Out for the first and only time. He retained the WWE title at WrestleMania XX against Kurt Angle, and lost it to John Bradshaw Layfield at the Great American Bash in a Texas Bullrope Match, ending his reign of champion after over four months.

In 2005, Eddie become one of the most notorious heels after turning on Rey Mysterio, who he won the WWE Tag Team Championships with. After losing to Mysterio at WrestleMania while both were still champions (the match occurred to do manipulative influence from Chavo Guerrero), tension continued to build between Guerrero and Mysterio, with Guerrero finally snapping when they lost the titles. This led to a contentious feud between the two, even competing at SummerSlam over custody of Mysterio’s son Dominick, in which Mysterio won. Before SummerSlam, Guerrero had a series of matches at house shows against The Undertaker, but this feud never manifested on television.

Guerrero attempted to win the respect of Batista, who he was unsuccessful in defeating for the World Heavyweight Championship at No Mercy. This planted seeds to becoming a babyface (good guy) again, and his last match was against Mr. Kennedy on the November 8, 2005 episode of WWE SmackDown.

How Did Eddie Guerrero Die?

During my interview with Ken Anderson (Mr. Kennedy) on the Pancakes and Powerslams Show, he expressed his thoughts on being the last person Guerrero wrestled.

“I feel weird about that. I’m not necessarily happy, [but] I’m just glad that I got to work with him at all, and to have a match that was memorable… and the fact that I got to travel with him, learn from him, it’s just something I will never forget.”

On November 13, 2005, Guerrero was found dead in his hotel room at the Marriott City Center in Minneapolis, Minnesota. It was determined that he died of heart failure, and he was only 38 years old. Eddie’s wife, Vickie, continued the Guerrero legacy by being one of the most prominent figures for a number of years as the role of both Raw and SmackDown General Manager on different occasions. Eddie was inducted into the WWE Hall of Fame in 2006.

Although Eddie had moments where his addictions got the best of him, even causing Vince McMahon to let him go which led to a brief stint in Ring of Honor (ROH), his determination and amazing in-ring work caused WWE to bring him back. Eddie took full advantage of this opportunity creating some of the best moments in his career.

Undoubtedly, Eddie Guerrero is one of the greatest superstars who have ever competed in a WWE ring, and Steve Austin once stated that “he was very heartbroken” and “he was a sweetheart of a guy.”

READ MORE: Which Decade Is The Greatest In WWE History?