During her heyday, Lita was a force to be reckoned with in the WWE scene. The red-headed beauty could charm folks with her smile but crush opponents with her fists. There's no doubt about it: Lita is one of the most iconic WWE divas of all time.

She may not have found the quite the same success in the ring that women's division opponents like Trish Stratus and Mickie James did, but Lita (whose real name is Amy Dumas) won four WWE Women's Championships during her wrestling career. From learning the sport in Mexico and debuting in the World Wrestling Federation alongside Essa Rios to her time managing The Hardy Boyz and on-screen relationship storylines with Kane and Edge, Lita definitely knew how to get wrestling fans invested.

Lita's WWE career lasted about six years, but she's worked in some capacity for the organization since and even been back in the ring in the years following her retirement. As a WWE Hall of Famer, her name now carries the same weight as some the greatest superstars in WWE history like Stratus, James, Stacy Keibler, Molly Holly and Torrie Wilson.

Lita's real name is Amy Christine Dumas. She was born in Fort Lauderdale, Florida, but attended high school in Atlanta. In 1993, she dropped out of college at Georgia State University, a move that would ultimately pay off for the future WWE superstar.

Wrestling first piqued her interest after watching Mexican-American luchador Rey Mysterio Jr. on an episode of World Championship Wrestling's Monday Nitro. Soon after, she packed her bags for Mexico in 1997 to learn more about wrestling.

Lita began wrestling in the independent circuit in the late 1990s, which is when she met Jeff Hardy and Matt Hardy, a duo that she would eventually manage as The Hardy Boyz. After a brief stint with Extreme Championship Wrestling (ECW) in 1999, she was signed to the World Wrestling Federation (which became the WWE in 2002).

RELATED: Trish Stratus Is Still a Bombshell at 44 Years Old

She debuted for WWF in 2000 alongside Essa Rios in Sunday Night Heat, but it wasn't until she joined Team Xtreme AKA The Hardy Boyz that Lita gained a huge following. While her other female counterparts were accustomed to wearing as little as possible, Lita often wore baggy pants with a thong hiked up to her belly button.

Trish Stratus was easily Lita's biggest rival throughout her career. The storyline began when Stratus, the manager of T & A (Test and Albert) started feuding with Lita in 2000. That led to epic matches like the Raw main event tag team match in which Lita and The Rock defeated Stratus and Triple H.

It wasn't until August 21, 2000, that Lita won her first WWE Women's Championship when she moonsaulted Stephanie McMahon in the main event of Raw is War. As part of The Invasion in 2001, Lita and her rival Stratus teamed up to take down Keibler and Wilson in what became known as the "bra and panties match."

Lita's on-screen relationships were well-known. She already began dating Matt Hardy in 1999 before they turned their real-life relationship into a public storyline. The Hardy Boyz disbanded following a loss to the Undertaker and after Lita's neck surgery in 2002. Matt moved to Smackdown while she returned to WWE and had on-screen relationships with wrestlers like Kane, Christian and Edge, the latter of which joined her for a "Live Sex Celebration" WWE Raw segment in 2006 that was a professional wrestling ratings hit.

The last match of Lita's career before retiring in 2006 came at Survivor Series. She lost to Mickie James and then Cryme Tyme sold all of her items as part of a "ho sale."

She made appearances off and on in women's wrestling since. She appeared in a women's Royal Rumble match in 2018 despite being in her 40s. Later that year, she fought in a 10-women tag team match in which she, Stratus, Natayla, Sasha Banks and Bayley fought Mickie James, Alicia Fox and the Riott Squad.

Fourteen years after her debut, Lita was inducted into the WWE Hall of Fame as part of the 2014 class. The wrestler inducting her? None other than Trish Stratus.

How Old Is Lita?

Don't let her age fool you, though. She most certainly can still kick some ass in the ring and is still as beautiful as ever.

Her tattoos are also still fully on display, and she seems quite proud of them. For example, she has a three-eyed green gargoyle on her right bicep and in 2007 she inked up a sleeve on her left arm full of skulls. The jury is still out as to whether she still has any tongue or nose piercings.

Where Is Lita Now? 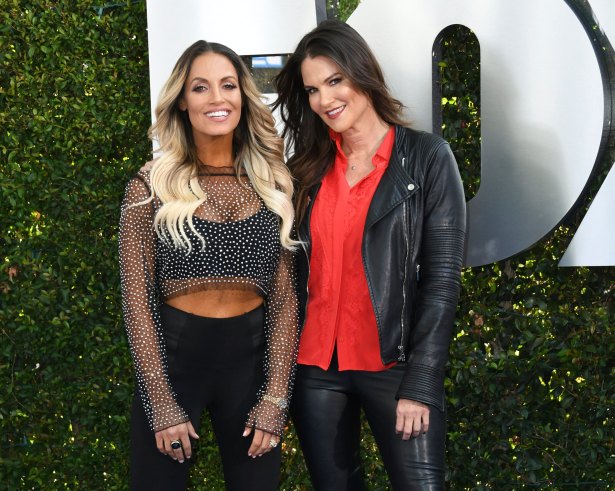 Lita worked with WWE as a backstage producer as recently as 2016. She also was featured on the WrestleMania 33 pre-show in 2017 as a color commentator.

Stage fright has never been an issue for the woman who formed a band, The Luchagors, in 2006. She also wrote an autobiography and was the subject of the 2001 DVD Lita: It Just Feels Right.

Lita now lives in San Francisco, California. Judging from her Instagram, she enjoys hiking, the outdoors and her dog.

Oddly enough, in 2018 she hosted a show for ASY TV called "The UFO Sho." Lita explained that it was less "UFO hunting" and more exploring the culture of UFOs.

"My premise of the show is incorporating being on the road and stopping and pulling over at every (UFO themed) road side attraction, but we weren't going to be that show that actually proves anything," Dumas told Punk Rock and UFOs. "We aren't 'hunting' UFOs. It's more of a human interest show. The theme that links all the parties together."

In March 2020, she announced the launching of KAYfABE with former wrestlers Christy Hemme and Gail Kim. According to a press release, the pro wrestling show "is a dramatization and collection of female stories inspired by real life events."

Lita Is Not Married

Lita doesn't appear to have a husband or children, but we do know some of her dating history.

Of course, she dated Matt Hardy in the late 1990s and early 2000s. She also reportedly had a relationship with wrestler and MMA fighter CM Punk.

?Lita, who is reportedly vegan, appears to live a happy and care-free lifestyle these days. Just don't piss her off and make her step back into the ring.