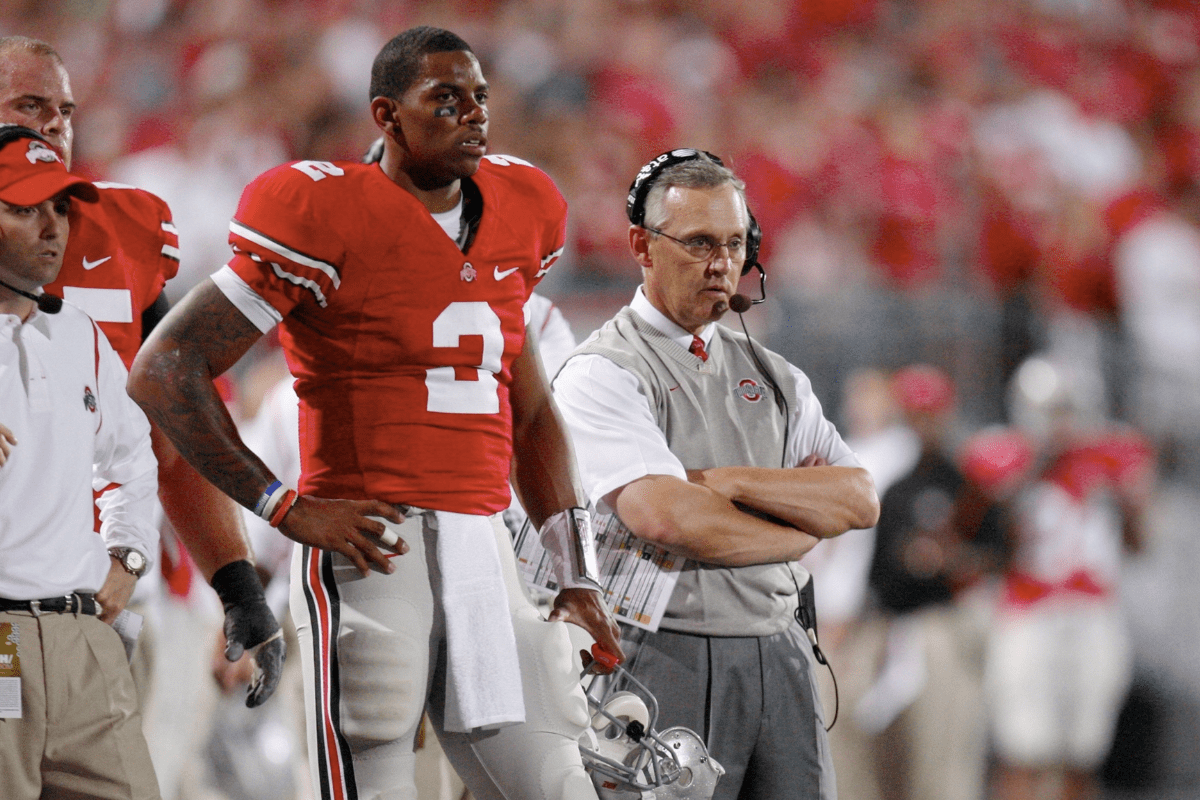 In December 2010, one of the most memorable scandals in college football history hit the news and it ultimately led to the fall of former Ohio State head coach Jim Tressel.

From tattoos to the selling of team memorabilia, the Buckeyes were hit with NCAA rules violations for improper benefits that resulted in multiple suspensions and the head coach being forced out of town.

Here’s how it all went down.

However, perhaps the biggest outcome of the scandal came when head coach Jim Tressel — after being suspended for five games with his players — talked with athletic director Gene Smith and university officials and decided to step down from his position.

This came after Tressel’s 10th season in Columbus, finishing with a record of 106-22 and 66-14 in Big Ten play. He also led the Buckeyes to the National Championship in 2002, beating a stacked Miami Hurricanes team in the Fiesta Bowl for the program’s first title since 1970, and coached quarterback Troy Smith during his Heisman Trophy winning season in 2006.

“Tattoogate” not only ended his coaching career at OSU, but for good.

Tressel finished his time with the Buckeyes with a 12-1 season and Sugar Bowl game win over Arkansas in 2010. His only other coaching role came when he was a consultant for the Indianapolis Colts in 2011.

At the time, this was one of the top football coaches in America who had his program consistently winning double-digit games. Tressel won seven Big Ten Championships, and beat rivals like Michigan year-in and year-out. Coaches have done much worse and received much smaller punishments, though it seems like the country is finally coming around as to how Tressel was treated.

In 2015, Tressel was inducted into the College Football Hall of Fame as well as the Ohio State Athletics Hall of Fame. These both came after he spent time at the University of Akron and had become the president of Youngstown State University, where he began his head coaching career in 1986.

For a big portion of my youth, I saw Tressel as one of the best coaches in the country, but he was basically thrown under the bus immediately and never given another chance to coach college football for knowing about rules being broken, yet there are coaches who have allowed legitimate crimes and have not been punished as harshly.

Tressel, by rule, wasn’t able to coach in college football for five years after the ruling against Ohio State, so it isn’t like another team could have hired him. Once that five-year period was up, though, it was his decision to stay out of college sports for good. He retired from coaching once he became a school president.

Tressel had the Buckeyes’ program in a great position moving forward, and most fan bases would have taken him to lead their program in a heartbeat if you had asked a month prior to the scandal news.

If the new NIL rules, where college athletes are able to profit off their image and likeness, were around then, the Ohio State players could’ve used that money to pay for the tattoos. They wouldn’t have had to circumvent NCAA rules and surely wouldn’t have been cited for infractions. Their future NFL careers wouldn’t have been blemished, either. It wouldn’t have entered the radar of ESPN, The Associated Press or The Columbus Dispatch.

In a world where student athletes from Auburn, Texas, Florida, USC or any other big time program can make millions now, the Ohio State tattoo scandal has aged poorly.