College football rivalries are a time-honored tradition, with spirited matchups across university campuses ushering in the fall season. The 2022 campaign will be no different as college football's most recognizable names gear up to go head to head.

With the NCAA season set to kick off, it's time to predict how the sport's most heated rivalries will shake out before anyone even takes the field. 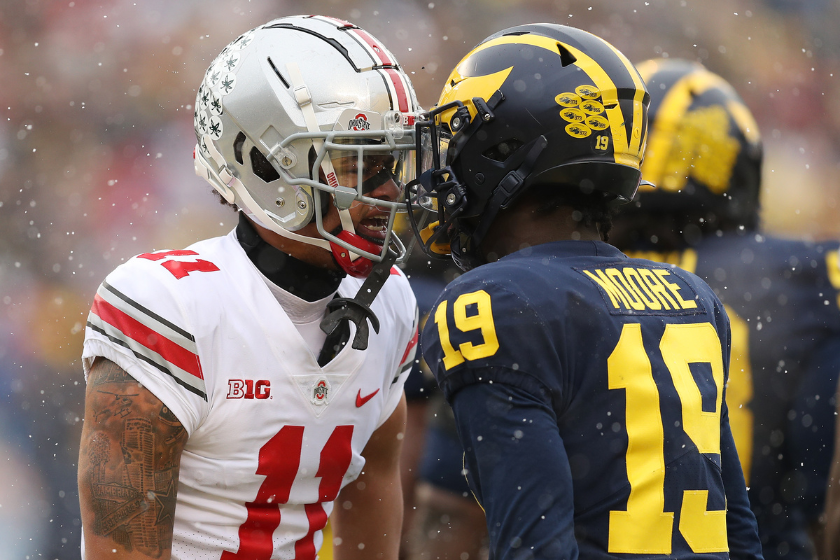 Order was restored to the Michigan-Ohio State rivalry last season, with Jim Harbaugh and the Wolverines pulling out their first win over the Buckeyes since 2011. The result injected the once lopsided competition with a restored sense of drama and intrigue.

The historic Big Ten rivalry matchup moves to Columbus, Ohio, for its 2022 iteration, giving the Buckeyes home-field advantage. Ohio State will also enter the contest with something to prove as the taste of a heartbreaking loss in the Big House still lingers.

With most of Ohio State's No. 1 offense returning for this year's campaign, including Heisman finalist quarterback C.J. Stroud, taking out the Buckeyes will be a tall order for Michigan. The Wolverines' defensive unit, which is experiencing high turnover from last year, will need to step up in a significant way if head coach Jim Harbaugh's Wolverines are going to pull out the upset.

While the spotlight will undoubtedly be on Ohio State's humming offense, Michigan is set to have a solid quarterback with both Cade McNamara and J.J. McCarthy as options, and depth in the running back role.

Pick: November's rivalry matchup is Ohio State's to lose. With all signs pointing to a new-and-improved version of last season's squad, the Buckeyes looked poised for an undefeated conference run ahead of a college football playoff push. That means "The Game" is theirs to lose in 2022. 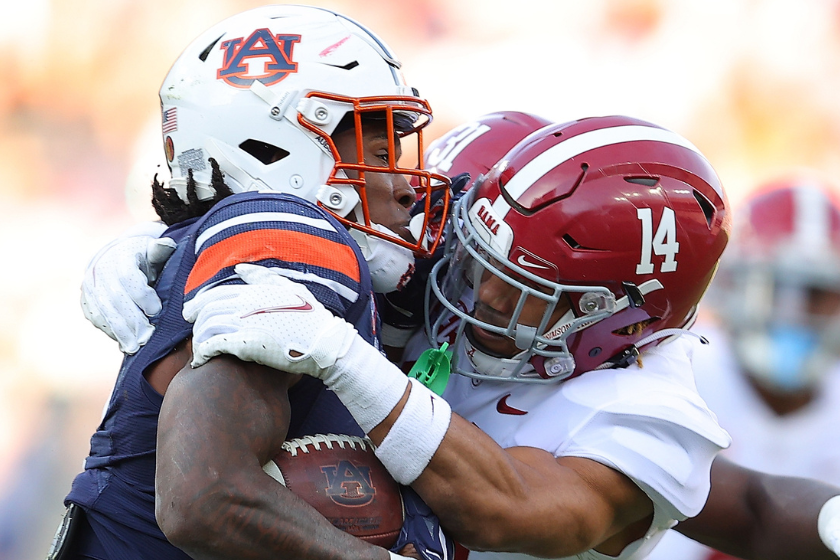 Adding to an already stacked roster with a series of picks from the transfer portal, Alabama isn't short on talent. Former Georgia receiver Jermaine Burton gives Heisman-winning quarterback Bryce Young even more options down the field, while on defense most starters are set to return.

As Alabama builds up to a championship run, rival Auburn will look to rebuild after a series of losses to the transfer portal and offseason drama.

In his second year with the Tigers, Bryan Harsin will hope to quiet the naysayers and clinch a maiden victory over Alabama. All hope isn't lost for Auburn, though, with T.J. Finley, Robby Ashford, Zach Calzada, and Holden Geriner in the running for QB1 and the squad's run game looking promising. 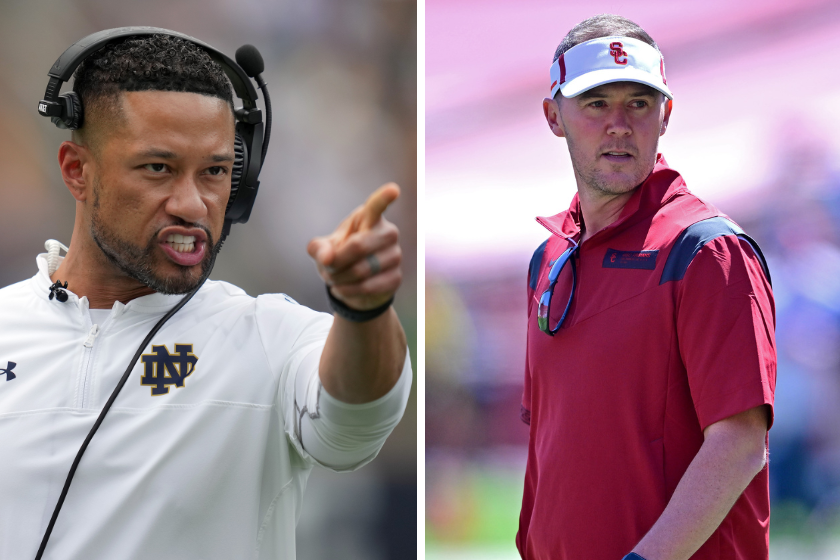 The 2022 season will usher in new eras for both Notre Dame and USC.

Marcus Freeman has taken over the head coaching job for the Fighting Irish after Brian Kelly left South Bend for LSU. The 36-year-old will have big shoes to fill but appears up to the task with the enthusiast backing of his players.

Notre Dame's offensive line, anchored by Jarrett Paterson, looks solid and capable of supporting the team's running game spearheaded by Chris Tyree. The squad's physicality may just be enough to charge to a winning season, including a victory over rivals USC.

A new, exciting coach is also getting settled in Southern California, with Lincoln Riley taking over the Trojans' program. Riley will have Caleb Williams in the QB1 position, an impressive start to his rebuild after the former Sooners star was plucked from the transfer portal.

Pick: USC will pull out the victory, spurred by a home crowd and eagerness to put the team's losing 2021 season behind them. 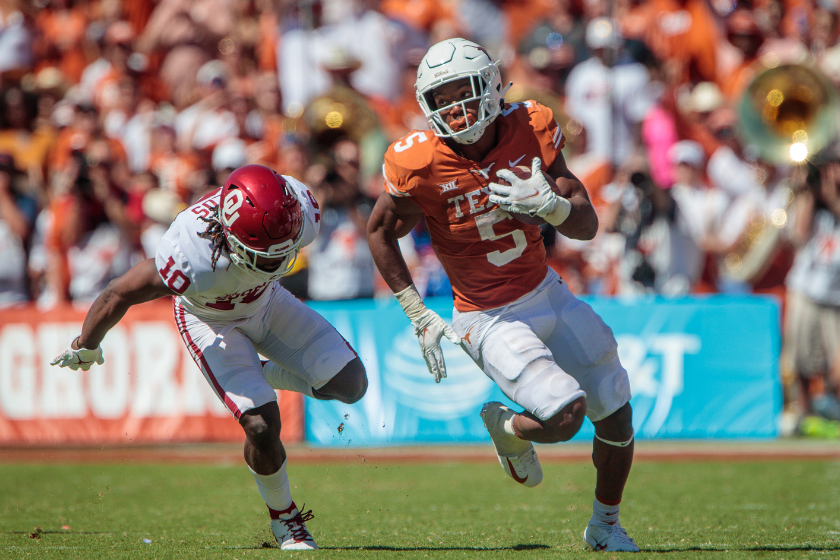 Where: The Cotton Bowl Stadium

Out with the old and in with the new is the Sooners' motto for 2022, with coach Riley and quarterback Williams heading to USC. Former Clemson defensive coordinator Brent Venables will take over the program, with Linebacker DaShaun White anchoring an Oklahoma defense that looks poised to shine in 2022.

On the other side of the ball, the Sooners have work to do. Oklahoma is hopeful UCF transfer Dillon Gabriel can take over the quarterback role, but he won't have many established stars around him to work with.

Texas will also have a new quarterback this year after securing Quinn Ewers, a 5-star prospect from Ohio State. Ewers will have a series of weapons at his disposal, with star receivers Xavier Worthy and Jordan Whittington returning to Austin and Bijan Robinson, who averaged 5.8 yards per carry last season anchoring the Longhorns' run game.

On defense, Texas has struggled, allowing just over 30 points per game last year. Defensive coordinator Pete Kwiatkowski has worked to pad out his roster, dipping into the transfer portal to do so. While Oklahoma may not be the most daunting of defensive tests, the Longhorns will still need to get stops if they want to take home the rivalry win.

Pick: Texas will squeeze out a narrow victory over Oklahoma, with the Longhorns' offense overcoming the Sooners' solid D in one of the final times this rivalry will take place in the Big 12. 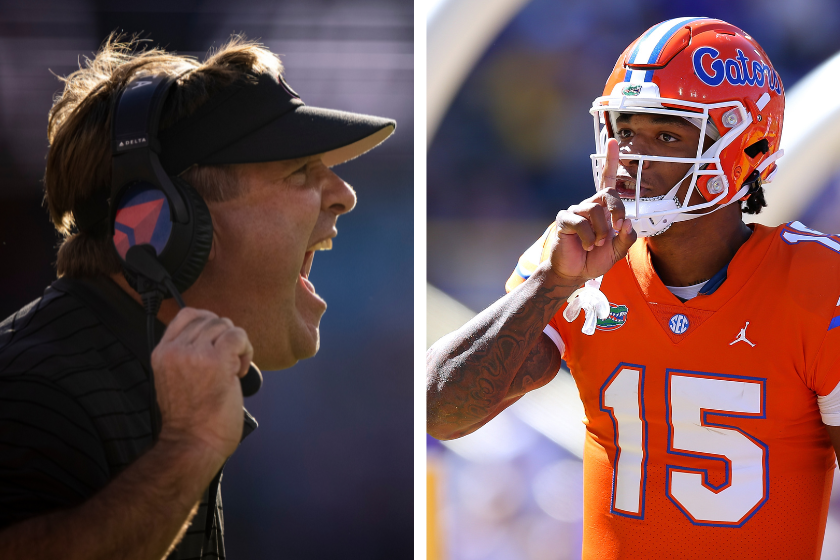 Reigning national champion Georgia will look to run back its title run in 2022, and the team might just have the talent to do it.

While the Bulldogs lost a considerable amount of its defense to the NFL Draft, Georgia has done a solid job of replenishing its roster, building around the explosiveness of lineman Jalen Carter.

At Florida, quarterback Anthony Richardson will look to make his mark as a Gators stalwart, and he will have to do so without proven offensive depth around him. The defense has a lot of question marks around it as well and will have to weather a demanding schedule before taking on Georgia in October.

Pick: Georgia will take out Florida handily, with the Bulldogs boasting depth in nearly every positional category.

MORE: The 10 Most Exciting Plays in Iron Bowl History, Ranked