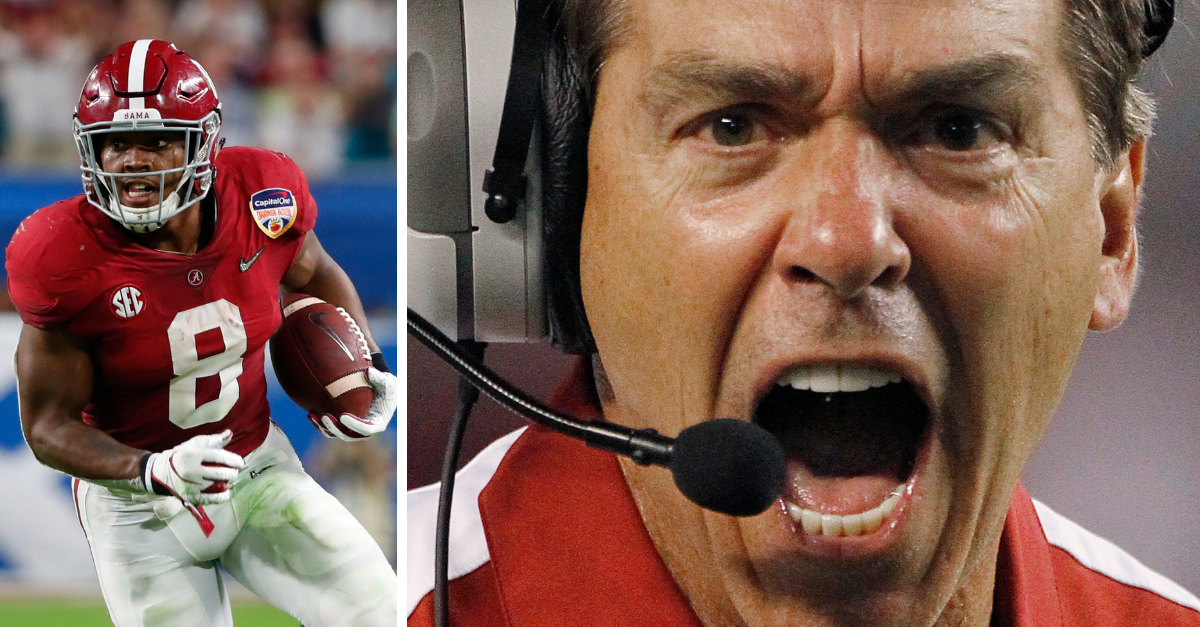 The large majority of college football fans look at the Alabama Crimson Tide’s fearless leader in Tuscaloosa as some kind of modern-day Darth Vader. With an army of blue-chip players and constantly rotating assistants, head coach Nick Saban is the cold-hearted ruler of the Alabama football dynasty. Apparently, he also loves a good ‘Deez Nuts’ joke.

In an interview with PFT Live, former Alabama running back Josh Jacobs talked about his college career, preparing for the 2019 NFL Draft, and the Tide being “mentally fatigued” prior to their national championship loss to Clemson. He also brought to light the true nature about his college coach. Nick Saban is secretly a real class clown.

During the interview, Jacobs talked about what it’s like playing for the often-feared, 68-year-old football coach. While Saban primarily works with the defensive side, more than 40 years of coaching experience, eight SEC Championships, and six national titles hasn’t made him any less of a players’ coach on offense.

“I was one of the rare lucky ones. He never really yelled at me. He used to joke with me and say a couple of things, but besides that he never… Like if I was catching a lot of passes that day, he would try to say something like, ‘Hey Josh, you keep catch all these passes, how about you hold deez [nuts]?’ or something like that. Just something funny for a coach to try and translate and get to know to each player”

When he’s not slamming his headset on the ground, criticizing students for not being interested in the Crimson Tide’s dominance, or rewriting the NCAA history books, Nick Saban apparently enjoys landing a good old ‘deez nuts’ joke.

One of the curious moments from Jacobs’ interview was when he addressed why Alabama lost to Clemson. Jacobs said that he “could feel it was gonna be a rough one” prior to kickoff. Mental fatigue, which Jacobs attributed to getting “everybody?s best shot” week after week, was likely a big factor why the Crimson Tide were rolled 44-16.

In the College Football Playoff National Championship, Jacobs ran 11 times for 47 yards and caught one pass for another 16 in what was his last game for Alabama.

After much discussion with my family, coaches and mentors I have decided to declare for the 2019 NFL Draft. I want to thank the University of Alabama and my teammates for an incredible three years. Thank you @UofAlabama @AlabamaFTBL I’m out ✌🏽 pic.twitter.com/bzKJv7wy2A

Jacobs was Alabama’s third running back playing alongside Damien Harris and Najee Harris as a junior. In his final year, Jacobs accounted for 887 total yards and 14 touchdowns courtesy of Tua Tagovailoa and the Tide’s dynamic offensive players. Heading into the 2019 NFL Draft, Jacobs was considered one of the best prospects due to low wear and tear on his body and was the first running back selected in the draft by the Oakland Raiders with the 24th overall pick.

Having the luxury of so much skill at Alabama hasn’t pushed Josh Jacobs’ immense talent out of the spotlight. If anything, Saban’s passion for developing quality football players, no matter who they are, made Jacobs a top-rated NFL prospect. Apparently, a little tasteful humor from Nick Saban helped to keep the future NFL star hanging around at the University of Alabama, too.

This article was originally published February 1, 2019.

UPDATE (August 20, 2020): In the midst of preparing for the 2020 coronavirus-shortened season, Saban joined The Dan Patrick Show to talk all things Alabama.

In classic Dan Patrick fashion, he closed the interview with a simple question: “Would you like to comment on ‘deez nuts’?”