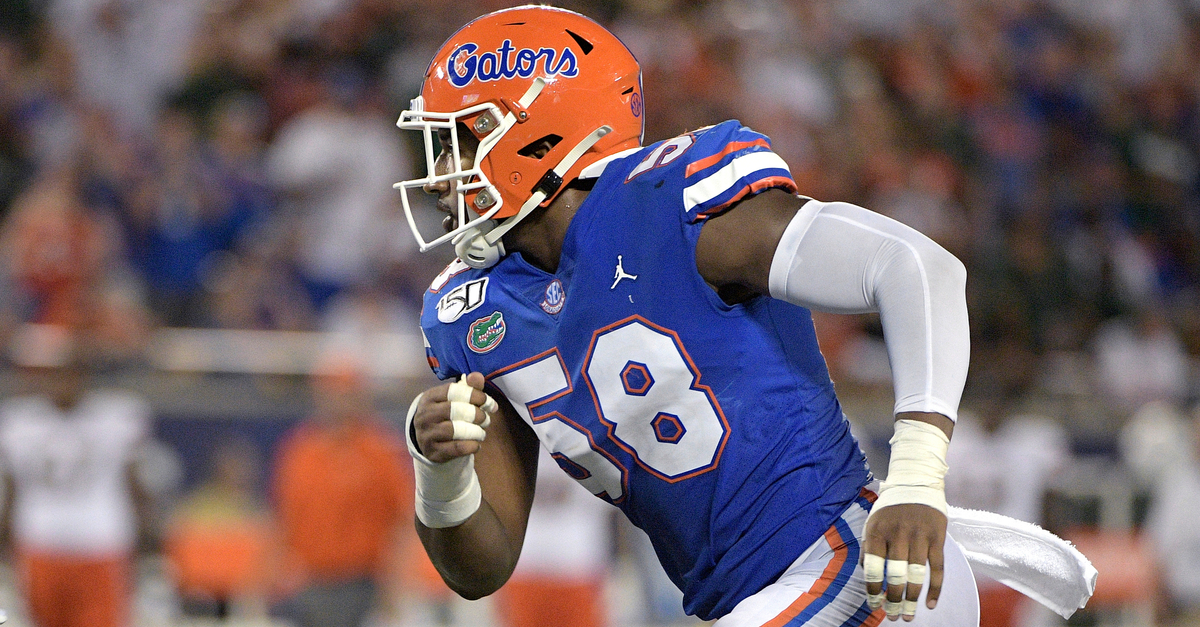 The Florida Gators have had so many great defenses over the years that it’s hard to remember which star defensive players played for which teams. Go ahead, Google the former players and exhaust yourself reading down the list.

From UF’s ball-hawking 2009 defense that featured the likes of NFL regulars Joe Haden, Janoris Jenkins, Major Wright, Ahmad Black, Will Hill, Brandon Spikes and Carlos Dunlap to the 2012 team that consisted of Dante Fowler Jr., Sharrif Floyd, Dominique Easley and Jonathan Bullard, it’s easy to see why the Orange and Blue has bruised and battered opposing quarterbacks and offenses.

In 2019, that’s been no different. The main driving force behind UF’s once-again-elite defense? Jonathan Greenard.

Where Did Jonathan Greenard Come From?

A graduate transfer from the University of Louisville, Greenard has been a revelation for the Gators all season. The 6-foot-3, 260-pound defensive end and outside linebacker was recruited by Todd Grantham at Louisville and followed him to Gainesville when UF head coach Dan Mullen hired Grantham to be his defensive coordinator.

After tearing a ligament in his wrist and missing the entire 2018 season, Greenard was left with a choice: Stay and play for the Cardinals, a program he was the team captain at, or follow Grantham and take his talents — he posted seven sacks and 15.5 tackles for loss in his redshirt sophomore 2017 season — to a Southeastern Conference team known for developing great defensive players.

The results: a team-leading four sacks, 28 tackles, 6.5 tackles for a loss, seven quarterback hurries, one forced fumble, three pass breakups and even an interception. Those across-the-board statistics seem odd for a defensive lineman, but that’s how destructive the man built like a wrecking ball has been.

Jonathan Greenard leads the way as the highest-graded edge defender in the SEC! pic.twitter.com/DNYgSPLBFa

The Hiram, Georgia, native is a main reason Florida’s defense ranks among the best in the country heading into a top-10 college football showdown with LSU. Here’s where the Gators stand defensively six games into the season after limiting the Auburn Tigers to 13 points at home:

What’s more is that Florida has allowed (wait for it) 16 points in four games in The Swamp. Never before has the “only Gators get out alive” chant been more true. OK, maybe it has. Don’t quote me on that.

With the ankle injury to top UF pass rusher Jabari Zuniga, Greenard’s play has made all the difference to defensive coordinator Todd Grantham. That he’s gotten 26 sacks out of his squad is a testament to his coaching ability and his players’ effort.

How Has Jonathan Greenard Found Success?

Jonathan Greenard’s coming out party came against Tennessee. He turned in a sack, two tackles for a loss, three passes defended, and a forced fumble. Pro Football Focus said he had four QB pressures and two defensive stops. To Volunteers quarterback Jarrett Guarantano, Greenard must’ve been like the annoying mosquito that constantly buzzes around you.

Florida DE Jonathan Greenard showing off his quickness, moves the tackle out the way, get his hands on the ball carrier causing a fumble. Makes a big time play! @jongreenard7 #florida pic.twitter.com/RT7HgHO7jz

Even in Florida’s season opener against the Miami Hurricanes in the Camping World Kickoff in Orlando, Greenard played a huge role in keeping quarterback Jarren Williams on his toes the entire game. He put two tackles for a loss and 1.5 sacks, but he made more of an impact than the stat sheet shows.

He doesn’t get the sack, but check how Greenard’s quick first step leads to a sack:

Adam Shuler and Jabari Zuniga split the sack, but this play doesn't happen without Jonathan Greenard.

And this video of Greenard and safety Shawn Davis, who leads the team with three interceptions, swarming a Miami wide receiver is just pure poetry.

A message to all of the remaining teams on UF’s schedule: Whatever you do, don’t leave Greenard unblocked like Kentucky did here. It’s a surefire way to get your quarterback injured.

Jonathan Greenard doesn't much care for Kentucky – comes away with the sack pic.twitter.com/NkH5pzlQb7

What makes Jon Greenard interesting is that statistically he’s been the best edge defender in the SEC despite being a graduate transfer and at one time a three-star prospect coming out of Hiram High School.

Florida undoubtedly boasts one of the premier defenses in the country, and that can be traced back to the impact grad transfer. Tough rivalry matchups against LSU and Georgia lie ahead, but if they can squeak out wins and take care of the rest of their games, they could be looking at a trip to Atlanta for the SEC Championship Game.

READ MORE: Did Kash Daniel Try to Hurt Florida’s Kyle Trask, Then Lie About It?