Major League Baseball has seen some pretty crazy things happen on-field over the last century. From the Chicago Black Sox fixing the 1919 World Series to Dock Ellis' LSD no-hitter to 10-cent beer night in Cleveland, MLB is just a timeline of ridiculousness.

What's been constant since the game's inception, though, is bad umpiring. Baseball's "guardians of the game" are human, after all, and we all make mistakes, which is why robot umpires are becoming increasingly part of the game and already being used in professional some levels.

So why the need for an R2-D2 calling balls and strikes or determining safe or out on plays?

Look no further than Detroit Tigers pitcher Armando Galarraga's almost perfect game on June 10, 2010, at Comerica Park. It's dubbed the "Imperfect Game" or the "28-out Perfect Game" because of a critical blown call on umpire Jim Joyce's part. 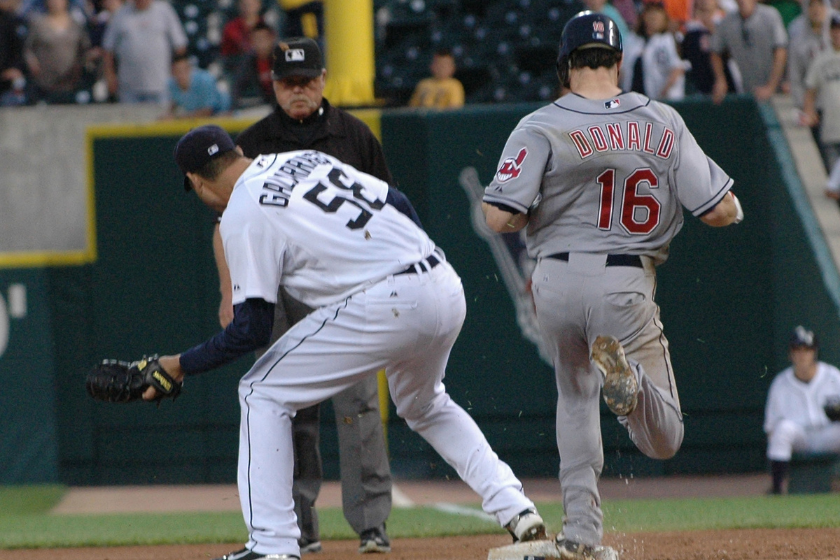 Galarraga, an average pitcher at best over his six-year career, dazzled that night in Detroit, Michigan. The first 26 at-bats by the Cleveland Indians didn't yield a single baserunner, and the righty was well on his way to twirling the 21st perfect game in MLB history, considered the rarest pitcher feat there is.

Indians shortstop Jason Donald bounced a ground ball with two outs in the ninth inning to first baseman Miguel Cabrera, who flipped it to Galarraga covering first base. The pitcher clearly stepped on first base with the ball before Donald did, but first base umpire Jim Joyce called Donald safe.

Galarraga, Cabrera and then-Tigers broadcasters Mario Impemba and Rod Allen were stunned. Watch the play from Fox Sports Detroit, and you will be too:

MLB began rolling in replay challenges for the first time during the 2014 season, which meant Joyce's call on the grounder years prior stood. There was nothing Galarraga or the Tigers could do about it. A franchise that has existed since 1901 was stripped of its first perfect game.

Galarraga retired the next batter, Trevor Crowe, for the one-hit shutout, but the entire baseball world hurt for the 28-year-old pitcher from Venezuela, and Joyce was entirely to blame for messing up a piece of baseball history.

Galarraga and Joyce both handled the situation exactly how they should've. Joyce apologized for his missed after the game, telling USA Today how remorseful he was.

"I just cost the kid a perfect game," said Joyce , who became a full-time umpire in 1989. "I thought he beat the throw. I was convinced he beat the throw until I [saw] the replay. It was the biggest call of my career."

Prior to the call, Joyce had a wealth of experience on the diamond. He umpired in two World Series, 11 playoff series and two All-Star Games. ESPN the Magazine ran a poll of 100 Major Leaguers weeks later, and a majority named Joyce the best umpire in the game. He retired in 2017. Galarraga, meanwhile, would leave the Tigers after the 2010 season and spend time with the Arizona Diamondbacks and Houston Astros before ending his MLB career in 2012.

Despite feeing a whirlwind of emotions following the call, Galarraga handled the situation with class.

"He probably feels more bad than me," Galarraga told USA Today. "Nobody's perfect. Everybody's human. I understand. I give the guy a lot of credit for saying, 'I need to talk to you.' You don't see an umpire tell you that after a game. I gave him a hug."

Tigers manager Jim Leyland said it was a "crying shame" but nobody in that stadium felt worse than the handlebar-mustached umpire. The old-school skipper said it was also part of the "human element" of baseball and didn't feel it constituted the need for replay review.

The next day a teary-eyed Joyce and Galarraga shared a beautiful moment pregame of sportsmanship on the field as Galarraga walked out to home plate to turn in Detroit's lineup card. They even presented an award together for "Best Moment" at the following month's ESPYs award show. 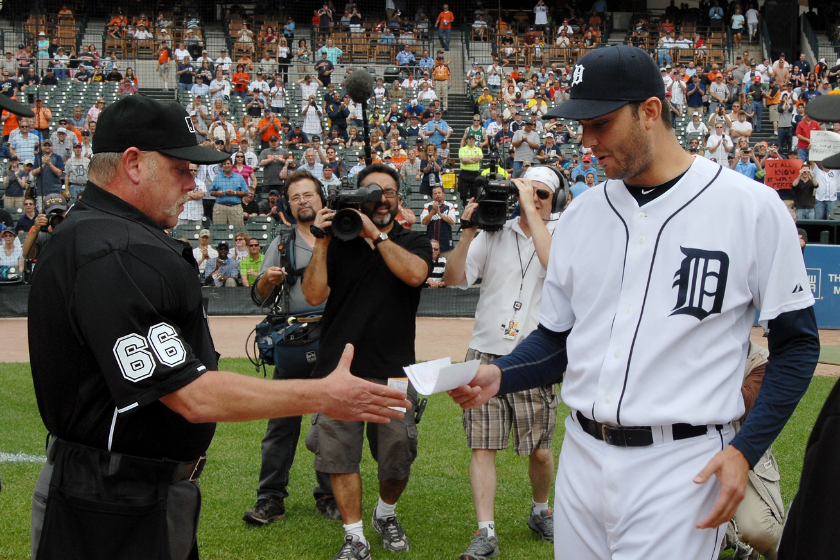 RELATED: The New York Mets' 1986 World Series was Fueled By Cocaine and Pills

Detroit gave Galarraga a three-run cushion to work with. Cabrera clobbered a solo home run in the second inning and Magglio Ordóñez singled home Austin Jackson and Johnny Damon in the eighth inning with the help of a Shin-Soo Choo throwing error.

As baseball fans know, there's always at least one key defensive play in a no-hitter or perfect game. Detroit fielder Austin Jackson's over-the-shoulder catch against the centerfield wall for the first out of the ninth will go down as this game's preserving moment.

Head on over to the Baseball Hall of Fame in Cooperstown, New York, and you can view the first base bag Galarraga stepped on from that memorable day.

Armando Galarraga would be designated for assignment by the Tigers after the 2010 season and he'd bounce around the league before finally hanging up his cleats after the 2014 season. Jim Joyce would retire in 2017, but his days of making controversial calls didn't end with Galarraga's blown perfecto. In Game 3 of the 2013 World Series between the Red Sox and Cardinals, Joyce was responsible for awarding Allen Craig home plate, due to what Joyce deemed interference by Boston third baseman Wil Middlebrooks. Allen represented the winning run, giving St. Louis a 2-1 series lead. Many Red Sox fans were seething and claimed that Joyce had it out for the Sox. But in the end, the call didn't matter as Boston would win the next three games, winning the series 4-2. 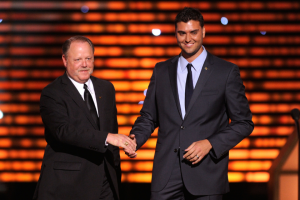 What's crazy is that while there's only been 23 perfect games in more than a hundred years of baseball, Galarraga's would've marked the third one in a span of 25 days. Philadelphia Phillies pitcher Roy Halladay tossed one four days prior and Oakland Athletics' Dallas Braden did so 20 days before that.

Joyce's call created a lasting impact in the baseball world. Journalists called for instant replay review and questioned whether commissioner Bud Selig should award Galarraga with a perfect game in the record books (he didn't). It's unclear as to whether or not current MLB Commissioner Rob Manfred will make good on that promise or if he'll just continue messing with the baseball.

Still, there's no doubt Galarraga's 28-out perfect game contributed to the implementation of instant replay on basically any play just a few years later. For that, I guess we can thank Joyce. Hopefully, something like this never happens again.