The Chicago Bulls were at a turning point.

The years of Michael Jordan and Scottie Pippen ruling the 1990s were over, and the franchise was transitioning to a new phase.

The Windy City team chose Duke point guard Jay Williams with the second-overall pick in the 2002 NBA Draft. A proven winner, scorer, and distributor, Williams was a guy to build around.

He started a majority of his rookie season. Though he struggled finding a rhythm, he showed signs of stardom.

Those signs vanished in an instant.

In June 2003, Williams crashed his Yamaha motorcycle into a streetlight in Chicago. He wasn't wearing a helmet, nor did he have a motorcycle license in Illinois. Additionally, he violated his Bulls contract that prohibited him from riding motorcycles.

The point guard suffered a severed nerve in his leg, a fractured pelvis, and three torn ligaments in his knee, including his ACL. Williams underwent intense physical therapy to regain the use of his left leg; leaving his basketball career in peril.

He famously screamed "I threw it all away," in the aftermath of the accident. The breaking news shocked the hoops world.

Williams' timetable to return was indefinite. In the 2003 draft headlined by future Hall of Fame players such as LeBron James and Dwyane Wade, Chicago drafted Kansas guard Kirk Hinrich to makeup for the vacancy at the point guard spot.

Due to the uncertainty of his recovery, the Bulls waived Williams in February 2004. He received $3 million in severance to use toward future rehabilitation expenses.

Jay Williams was born on September 10, 1981 in Plainfield, New Jersey. Jay excelled at chess, soccer, and volleyball in addition to hoops during his time at St. Joseph High School. He was named a McDonald's All-American and chose to play college basketball for Mike Krzyzewski at Duke University.

Williams blossomed in Durham. He averaged 19.3 points, 3.7 rebounds, and 6 assists in his three seasons with the Blue Devils. He college career is highlighted by leading Duke to the 2001 national championship and winning the National Player of the Year award in 2002. He graduated with a Sociology degree.

Although Williams' NBA career was cut short due to the motorcycle crash, he accomplished a lot for a young player:

Williams attempted a comeback with the New Jersey Nets in 2006. He was released prior to the regular season.

The basketball player went on to sign with the Austin Toros of the NBA Development League (now G-League). He was waived following three games due to injury.

After ending his playing career for good, Williams became a full-time basketball analyst. He's held college basketball and NBA duties for CBS and ESPN. He's currently an NBA analyst for ESPN and the spokesperson of the New York-based Visions Federal Credit Union.

Williams shares his story in his 2016 autobiography Life Is Not an Accident: A Memoir of Reinvention. 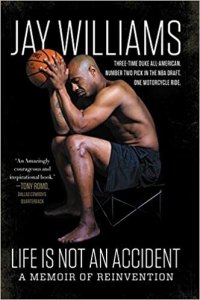