John Salley’s Net Worth: How Basketball & Acting Made Him Millions 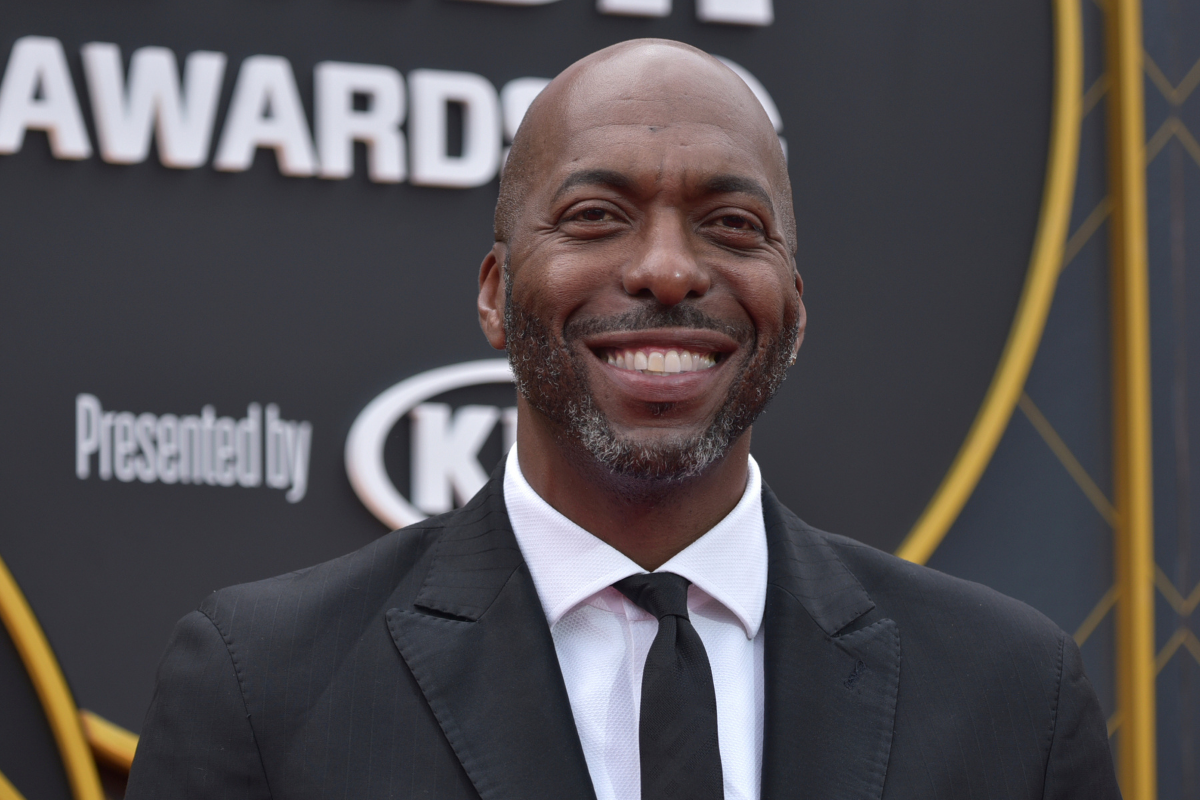 The NBA superstar wore five jerseys for five franchises and won four championships in two millenniums. First, he beat the Chicago Bulls and Michael Jordan to win two NBA Championships with the Detroit Pistons. Six years later, Salley joined his former rival during an all-time great season, the 1996 Bulls. Four years after that, he won another championship in Los Angeles with Kobe and Shaq.

Four NBA championships. Salley, until last year, had more titles than LeBron James. He wears as many rings as greats like Shaq and Tony Parker.

The funny thing is John Salley rode the bench.

Yes, of course, he saw good playing time and contributed, especially with the Pistons. He was tough, tall and talkative. I’m not saying he wasn’t a good basketball player or teammate. I’m just saying what it is: John Salley spent enough time on the bench to feed pigeons. But he was always on the right bench at the right time, and he has four NBA Championships to prove it.

John Salley has way more stories than championships. The big man is on screens from ESPN to FOX Sports to even your local movie theatre. Wherever you see him, the former ballplayer is almost always making people laugh.

He led the Georgia Tech Yellow Jackets to a NCAA March Madness Elite Eight appearance in 1985 after winning the ACC Championship. Then, he graduated from Georgia Tech with a degree in management. Salley left the Yellow Jackets with two records under his belt: most blocks and most personal fouls. Georgia Tech still has his number 22 jersey retired to this day.

RELATED: Dennis Rodman?s Net Worth: How ?The Worm? Earned (And Lost) His Money

John Salley’s NBA career is inseparable from Michael Jordan’s. Salley spent his best years either playing against the GOAT or with him. You can’t talk about Salley in the league without talking about MJ.

Salley was a first-round talent out of GT and was selected 11th overall by the Detroit Pistons in the 1986 NBA Draft. His good friend Len Bias was the number two selection of that draft. Bias tragically died from a cocaine overdose two days later.

Salley was also selected four players ahead of Dell Curry, the father of the NBA’s greatest shooter.

He may have been a grateful guy, but he became a Bad Boy in Detroit. In the late ’80s and early ’90s, the Detroit Pistons were mean, lean and made one hell of a good documentary. Salley was there for it all, a disciple of the infamous Jordan Rules.

While in Detroit, rookie Salley met a veteran player he refers to as “The Teacher.” According to Salley, Adrian Dantley got Salley started on his journey to health and well-being. Dantley was all about taking care of your own body while breaking Michael Jordan’s.

John Salley and the Bad Boys of Detroit won back-to-back NBA titles in 1989 and 1990, beating up His Airness along the way. Well, they thought they were beating him up. They were making him stronger.

A more potent and madder Mike returned with a vengeance in 1991. He never looked back. The Bulls swept Isiah Thomas, Dennis Rodman, Bill Laimbeer, John Salley and Chuck Daly in the 1991 Eastern Conference Finals. Most Pistons walked off the court before Game 4 was even over, refusing to shake the hands of their conquerors. Most Pistons that is. John Salley stayed behind to shake hands.

John Salley says he didn't want to be part of #Pistons' 1991 walk-off vs. the Bulls #TheLastDance pic.twitter.com/LQYdkQHvtB

Maybe he was thinking about the future. He’s a smart man. He does have a College of Management degree from Georgia Tech, after all.

Salley played one more season in Detroit before taking his talents to South Beach and the Miami Heat. There, Salley found the Heat’s coaching inadequate and joined the Toronto Raptors after three seasons. He spent less than a season as a Raptor before joining Jordan and the Bulls in Chicago.

The Bulls, quite honestly, were doing just fine without Sal.

Salley joined the Bulls in 1996, right in the middle of their historic 72-10 season. They already had MJ, Scottie Pippen, Toni Kuko?, Steve Kerr and Dennis Rodman. Their regular-season wins record remained unbroken until Steph Curry and the Golden State Warriors went 73-9 in 2016.

However, the 1996 Bulls remain the best NBA team of all time because they won their NBA Championship. John Salley was there, too. He didn’t contribute much, but he was there. It was ring No. 4 for Michael and No. 3 for Salley.

After 17 games with the Bulls in 1996, Salley took his talents to Panathinaikos in Greece for a dramatic season before retiring for the first time. Sadly, his brief time in Greece has nothing to do with Giannis Antetokounmpo.

Salley remained retired until 2000 when he joined Shaquille O’Neal and Kobe Bryant on the Los Angeles Lakers. (The Lakers function similarly today – two stars surrounded by a bunch of retirees and nobodies). Salley snagged his fourth ring with the Lakers and promptly retired for good this time.

Retired from basketball, that is. Salley’s career was from over. His NBA career ended in the same city his SAG career began: The City of Angels, Los Angeles, California.

I hate to admit that this didn’t dawn on me until writing this article, but “Bad Boys” and “Bad Boys II” featured a real-life Bad Boy: John “Spider” Salley.

He’s done great as an actor and is ever charismatic on camera, even if his only credit in Confessions of a Shopaholic is “D Freak.” His friendly demeanor and approachable posture belie his extensive IMDB page. Salley credits his attitude in part to his upbringing and in part to his diet. Salley is a vocal vegan and somehow not annoying about it.

Veganism is a growing trend in professional sports, from the NBA to NFL. Players-turned-PETA advocates claim benefits such as reduced joint pain and stomach issues while enhancing energy and overall well-being. If you spend time watching John Salley, his high energy might convince you.

Remember “The Best Damn Sports Show Period“? I wasn’t allowed to watch it (because of bad words), but Salley seems Damn Entertaining to me as a talk show host. When you’re that good on the court and the camera, you’re bound to be worth some cheese.

If you are interested in learning everything about John Salley, watch his VLADTV interviews and read his Deadspin series. The dude has got more stories than I can cover here.

John Salley has an estimated net worth of $14 million, according to Celebrity Net Worth. He shares it with his wife Natasha Duffy Salley and their three children. He’s invested in vegan companies, become a vegan chef and said cheesy quotes:

“Vegan eating is not just a slam dunk for human health; it’s also the most effective way to combat climate change.”

Surely Salley has pocketed some royalties from his acting career, even if “He’s a Lady” couldn’t air today. But then again, most of Salley’s stories about the NBA are NSFW, and that’s just the way we like him.

Salley had a career for the NBA history books. He won NBA championships in different decades, maintained a stable personal life and marital status with Natasha Salley and appeared in films and TV shows like Nappily Ever After and Noah’s Arc.

American former professional basketball player John Salley’s net worth plays a role in his wellness, but he would argue the effect works vice versa. One thing is for sure: with John Salley’s tall net worth and personality, every Christmas is The Ultimate Christmas in the Salley household.