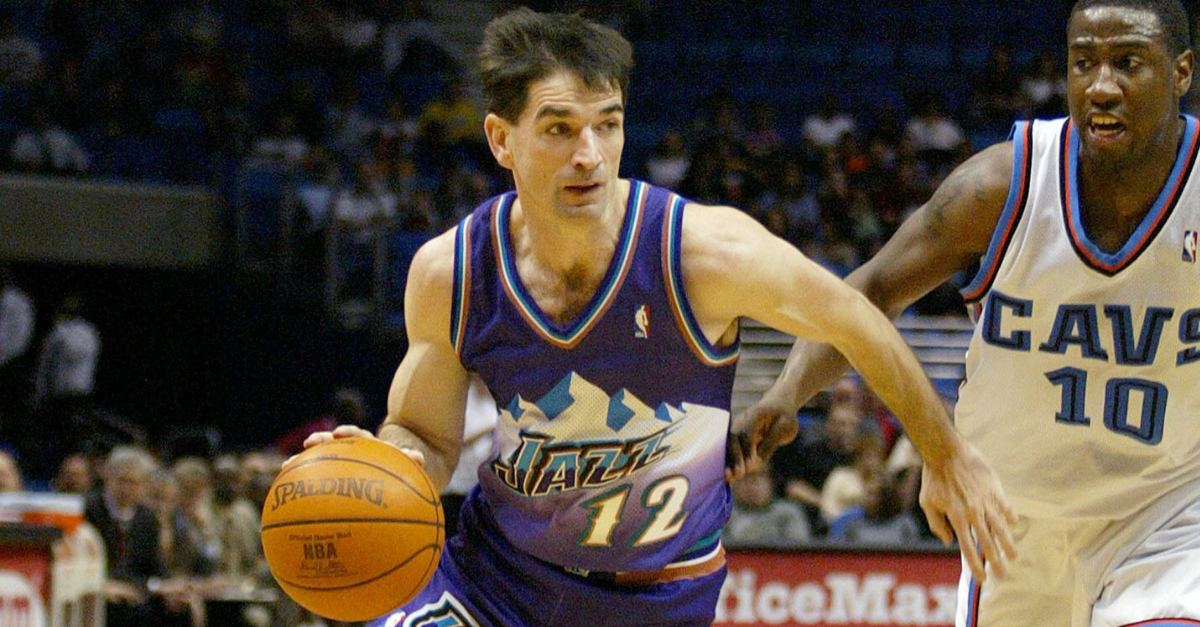 John Stockton is someone’s dad disguised as an incredible NBA player. He’s a normal-looking guy standing 6-foot-1, and he has that patch of chest hair your old man probably sports when he lets loose and unbuttons the top of his Tommy Hilfiger shirt when CCR comes on at the neighborhood Fourth of July party.

The NBA’s dad had an innate talent for finding his teammates in the right spots. He dropped passes in the breadbasket, making it easier to score, and dictated the pace and flow of the game. Stockton is the guy you wanted piloting your team.

Stockton grew up in Spokane, Washington. He attended Gonzaga Prep High School and played college basketball locally at Gonzaga University. He excelled in his four years as a Bulldog, culminating in an invitation to try out for the 1984 U.S. Olympic team under head coach Bobby Knight following his senior year. He made it down to the final 20 players but was ultimately cut. He later won two gold medals with Team USA. The first came in 1992 as part of the Dream Team, and the second came in the 1996 Atlanta games.

The Utah Jazz selected Stockton with the 16th overall pick in the first round of the 1984 NBA Draft. He didn’t see much playing time early in his career but gradually saw the court more. By 1987-88, Stockton’s fourth season in the league, he was the Jazz’s starting point guard and increased his assist average to 13.8 from 8.2 the previous season.

Head coach Jerry Sloan took over the next year, and Stockton exploded. He went on an assist rampage starting in the late 80s through 1996 and formed a deadly pick-and-roll duo with teammate Karl Malone. Man, it was pretty to watch. They knew each other’s games as well as their own. The Jazz ascended to one of the best teams in the NBA in the late 90s.

Perhaps Stockton’s greatest performance came in Game 6 of the 1997 Western Conference Finals against the Houston Rockets. Number 12 scored Utah’s final points to tie the game at 100. With 2.8 seconds left on the clock, Stockton nailed a three-pointer to send the Jazz to the NBA Finals for the first time in franchise history. They met Michael Jordan, Scottie Pippen, and the Chicago Bulls in the NBA Finals.

23 years ago, John Stockton drained a buzzer-beating three to send the Jazz to the NBA Finals 💦 pic.twitter.com/meLOhW3xJF

RELATED: What Is Scottie Pippen’s Net Worth in 2020?

Despite a valiant effort, Stockton and the Jazz lost in six games. The next year, they had deja vu and lost in six to the Bulls again in the Finals. Utah reached the NBA playoffs in each of Stockton’s 19 seasons.

He’s the NBA’s all-time leader in career assists with 15,806. He holds the four-best single-season assist records, recording 1,164 as his best mark in 1990-91 ? Isiah Thomas is the next closest guy not named John Stockton with 1,123. While Stockton fed teammates, he took away from opponents. He’s the all-time leader in career steals with 3,265 and has a comfortable lead over the second-place leader, Jason Kidd, in both categories.

He was individually inducted into the Naismith Memorial Basketball Hall of Fame in 2009, and as a member of the Dream Team in 2010.

John Stockton in The Last Dance

Jason Hehir gave some cool insight into the making of The Last Dance on the Dan Patrick Show.

John Stockton originally didn't want to appear, as he considered it a "Michael Jordan puff piece." They ultimately didn't get to interview him until March 10.https://t.co/xye7c01EMM

Recently, Stockton was seen in the last two episodes of ESPN’s The Last Dance as the last interview recorded. Director Jason Hehir said he tracked Stockton down for nearly two years before the Hall of Famer agreed to sit down. I’m sure he was thrilled to rehash the two most brutal defeats of his career.

The Utah Jazz icon is regarded as one of the best point guards in NBA history. He’s a legend in Salt Lake City and one of the best basketball players to come out of Gonzaga.

Stockton looked like he had countless dad jokes at his disposal but played the part of an NBA legend.

MORE: Where Are The NBA Draft’s Biggest Busts Today?