Behind the milk in the fridge is a slice of cold pizza. Behind your ear is a nickel you didn't know was there. Behind Twitter user KDFan475324521 is Kevin Durant.

Behind every head coach is a team of assistants.

In the National Basketball Association, assistant basketball coaches dissect film with players, prepare scouting reports, lead workouts, and offer any support they can to help their team win. It's a 24/7 job during the season that takes place behind the scenes.

Playing such an important role, how much do assistants take home?

How Much Does an NBA Assistant Coach Make? 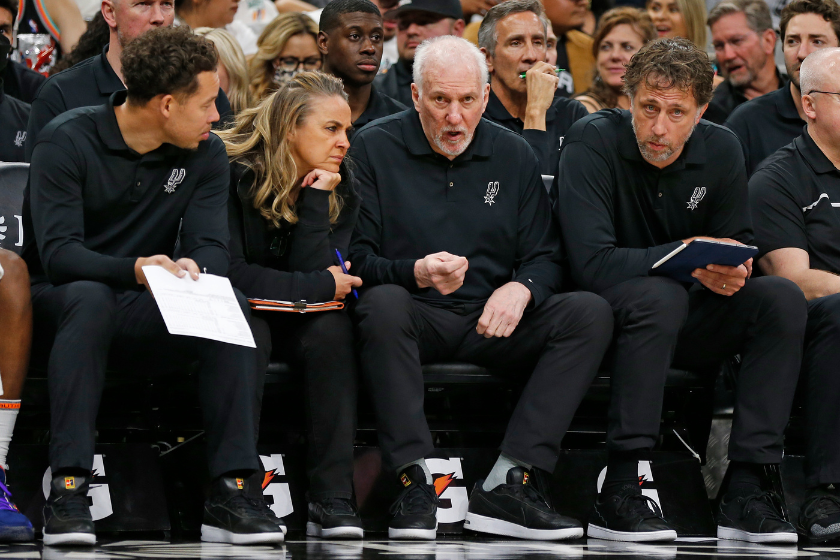 RELATED: How Much Do NBA Referees Make?

It's hard to place an exact figure since the NBA doesn't disclose coaching salaries. According to an article from The Washington Post published on New Year's Day 2019, NBA assistant coach salaries range from $100,000 to over $1 million depending on coaching experience.

The meat of the story revolves around WNBA player Kristi Toliver's unique situation as a member of Scott Brooks' Washington Wizards coaching staff at the time. Toliver was making a lowly annual salary compared to her peers. The new WNBA CBA helped her get a well-deserved raise.

Jason Kidd became the highest-paid assistant coach in the league when he was hired by the Los Angeles Lakers in 2019. It's unclear how much his base salary was in the deal, but it can be assumed it's in the ballpark of Tyronn Lue's four-year, $6.5 million deal with the Cleveland Cavaliers that made him the richest assistant in the league back in 2014. Kidd was hired as an assistant before Frank Vogel was brought in for the head coaching job. He has since been hired as the head coach of the Dallas Mavericks and employs Toliver as a member of his staff.

Some current assistants who played include Vin Baker of the Milwaukee Bucks; Kenny Payne of the New York Knicks; Damon Stoudamire of the Boston Celtics; Dahntay Jones of the Los Angeles Clippers; Jerome Allen of the Detroit Pistons; Adrian Griffin of the Toronto Raptors; Jared Dudley of the Dallas Mavericks; Maurice Cheeks of the Chicago Bulls; Kenny Atkinson of the Golden State Warriors; Fred Vinson of the New Orleans Pelicans; Ryan Bowen of the Denver Nuggets; Lionel Chalmers of the Orlando Magic; John Lucas of the Houston Rockets; Caron Butler of the Miami Heat; and Pablo Prigioni of the Minnesota Timberwolves.

The goal of any head coach isn't to win a coach of the year award. It's to take that offseason work and put it in practice for the regular season and playoffs with the end goal of winning an NBA championship. Assistants are a vital part of that process.

MORE: 10 Possible NBA Expansion Cities that Make the Most Sense