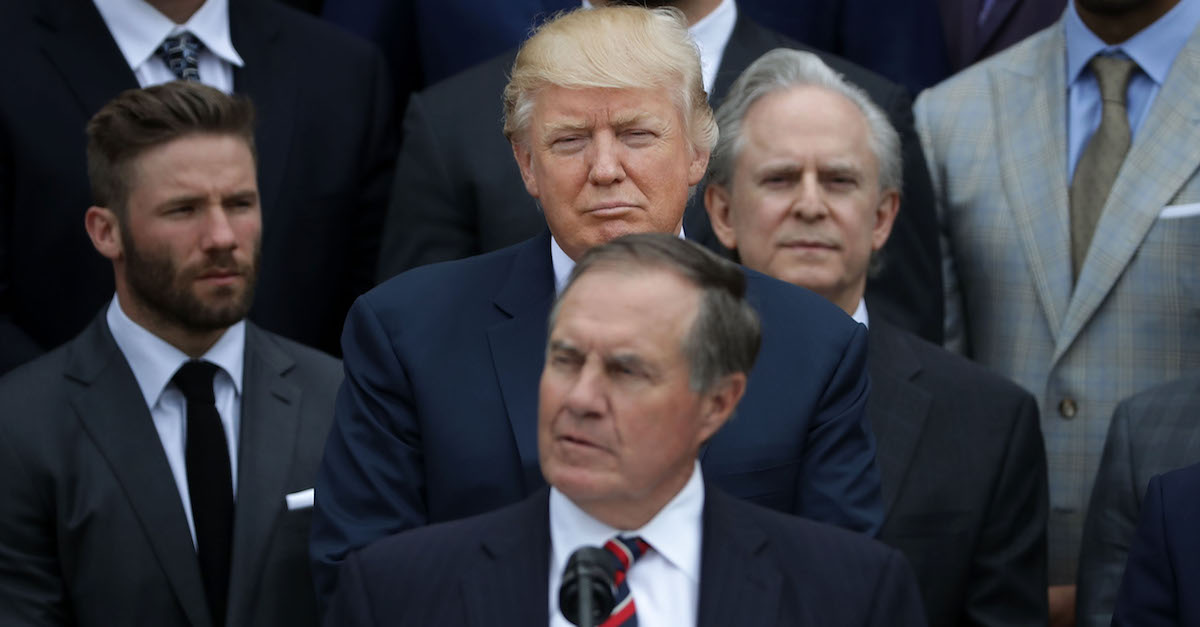 “I have immense respect and admiration for our players, of how they conduct themselves professionally as New England Patriots and for how they represent themselves, their families and community as men. I have coached football for over four decades and one of the greatest things about being in this environment is the diversity of people, backgrounds, viewpoints and relationships we are fortunate to experience. As with an large group of people, there is a variety of perspectives and opinions on many topics. Discussions occur between myself, individual players, groups and the entire team on an ongoing basis. They concern the team and other issues surrounding the team. I am going to keep the specifics of those conversations private. I will do what I feel is best for the team in my role as head coach and collectively, we will work together to find the best way to proceed.”

On Monday morning, in response to Trump, who Brady is famously friendly with, the legendary signal-caller joined WEEI?s ?Kirk and Callahan? (via ESPN.com) and took a stance.

?I certainly disagree with what he said. I thought it was just divisive.?

?I just want to support my teammates. I?m never one that says, ?Oh, that?s wrong or that?s right.? But I do believe in what I believe in, and I believe in bringing people together and respect and love and trust. Those are the values that my parents instilled in me and that?s how I try to live every day.

?I?ve been blessed to be in a locker room with guys from all over the United States over the course of my career. Some of my great friends are from Florida, Virginia, New York, Montana, Colorado, Texas. I think one thing about football is that it brings so many guys together, guys that you would never have the opportunity to be around, whether it was in college and all the way into the pros. We?re all different. We?re all unique. That?s what makes us all so special.?

Brady did not blast Trump in the same way that many have but he was plain in his comments about disagreeing and referring to Trump?s sentiments as ?divisive.?

This certainly won?t placate everyone, especially given Brady?s hesitance (or unwillingness) to come out in the past against the president. Still, it was a bit jarring to see Brady frankly state his disagreement and the reactions will be interesting as a result.

Kraft has been one of the NFL?s more notable supporters of  Trump, but even he has expressed concerns about Trumps comments from Friday.

I am deeply disappointed by the tone of the comments by the President on Friday. I am proud to be associated with so many players who make such tremendous contribution in positively impacting our communities. Their efforts, both on and off the field, help bring people together and make our community strong. There is no greater unifier in this country than sports, and unfortunately, nothing more divisive than politics. I think our political leaders could learn a lot from the lessons of teamwork and the importance of working together toward a common goal. Our players are intelligent, thoughtful and care deeply about our community and I support their right to peacefully affect social change and raise awareness in a manner that they feel is most impactful.

The President has not been shy with his comments, as he doubled down on Saturday amid another battle he waged with the NBA?s Golden State Warriors and former MVP Steph Curry. Curry had said that he had no intentions of doing the traditional White House visit, to which Trump responded by saying that Curry?s invitation had been rescinded. The Warriors announced later in the day that the whole team would not be taking the trip after the President?s comments.

For the two battles, Trump has drawn criticism far and wide, including from NFL commissioner Roger Goodell and former NBA MVPs LeBron James and Kobe Bryant. NBA commissioner Adam Silver also released a statement, expressing his disappointment that Trump and the Warriors were unable to put aside their differences and reach a resolution.