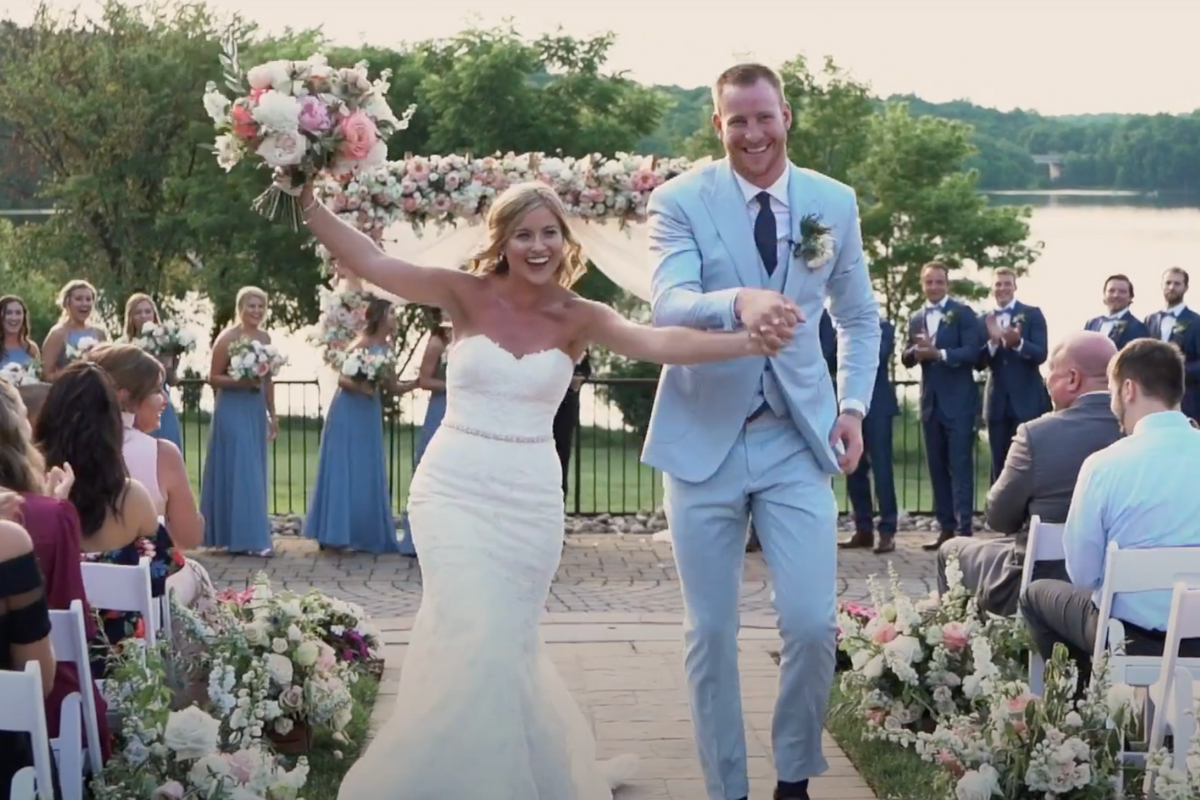 Quarterback Carson Wentz wasn?t on the field during the Philadelphia Eagles? Super Bowl victory in 2018.

Instead, Philly legend Nick Foles delivered the monumental victory against Tom Brady and the New England Patriots that brought the NFL’s coveted Lombardi Trophy to Philadelphia for the first time in the history of the franchise.

Despite being held back by injury, Wentz was able to collect a ring with the rest of the team after the big win. For Wentz, the celebration didn?t cease there, and soon after the gunslinger collected another key piece of jewelry: his wedding ring.

Carson Wentz did well to keep his romantic life out of headlines during his early playing days. Wentz was dating Maddie Oberg for a while prior to the Eagles? exploits in the Super Bowl, and upon winning the biggest game of the year, Wentz made the decision to get down on one knee and propose to Oberg just a couple days later.

Carson Wentz and Madison Oberg officially tied the knot in July 2018, just half a year after their engagement. Per NBC, Wentz and wife Madison were wed in Bucks County, Pennsylvania, and enjoyed a romantic honeymoon in Greece.

While it?s not publicly clear how Wentz and Oberg met, it?s been rumored the pair initially crossed paths on a mission trip in 2017 through a program Madison was believed to be involved with, Mission of Hope: Haiti.

The couple continued to remain private on social media for most of 2017 until Oberg made an appearance on his Instagram account after the quarterback underwent ACL surgery in December.

Obviously, now married, the couple is very public about their relationship. Since tying the knot in 2018, the Philadelphia Eagles quarterback and wife Maddie announced the birth of their first child, a baby girl, Hadley Jayne Wentz.

The Wentz family were delighted to welcome baby girl Hadley to the family, making the information public via Instagram.

“Late last night my beautiful wife and I were blessed to welcome our sweet little girl into the World! Hadley Jayne Wentz is a true blessing from the Lord and we are so pumped to be her parents ? I love these two with everything I have! God is soooo good! ??”

Wentz grew up playing football in North Dakota, where he played quarterback for Century High School in Bismarck. His talent in high school landed him an offer from North Dakota State, where he played five seasons, becoming one of the most recognized passers in program and conference history.

His success in college resulted in him being drafted second overall in the 2016 NFL Draft by the Philadelphia Eagles. Eagles QB Carson Wentz started all 16 games as a rookie, going up against top NFC teams such as the Cowboys and Packers.

Across his career, Wentz has led the Eagles to a 35-28-1 record and has thrown 109 touchdowns to 47 interceptions in addition to 8 rushing touchdowns.

He’s manned the starting role for the Eagles since being drafted as a rookie, taking the field on Thursday, Sunday, and Monday night. Even without the most talented wide receivers in his arsenal, Wentz continues to hold the reins of Philly’s offense, despite the team drafting Jalen Hurts in the offseason.