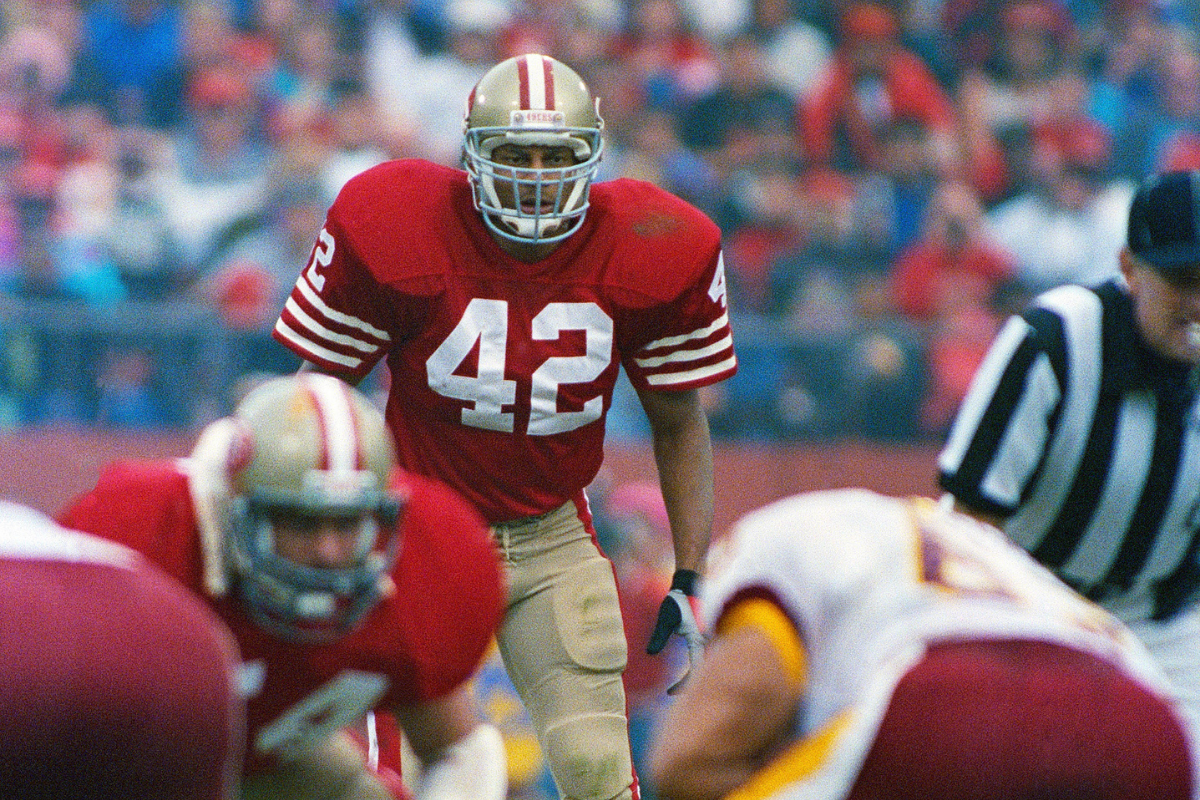 Playing in the National Football League takes toughness, grittiness and sometimes a little craziness. Lasting a full 16-game (now 17-game) grueling season isn’t for the weak, and many players play through injuries that no one in their right mind should.

The NFL is about rookie cornerbacks being booted from practice for hitting too hard. It’s about winning a Super Bowl, beating cancer then going back to school and triumphantly earning a degree. And sometimes, it’s about throwing hands on the field like Andre Johnson and Cortland Finnegan once did.

Many players have a certain edge to them and are known as guys you don’t want to mess with. You know, guys who would risk life and limb for their team. Literally.

Ronnie Lott was one of those guys. All the proof you need is that he once amputated his pinky because he wanted to avoid missing games.

The former San Francisco 49ers safety broke his left pinky finger trying to tackle running back Timmy Newsome in a game against the Dallas Cowboys in December of 1985. It was the last game of the regular season, and the Niners were heading to the playoffs with a 10-6 record.

In 1986 Ronnie Lott cut the tip of his pinky off to finish the game pic.twitter.com/4docLyYQ0E

…you remember when Ronnie Lott still had the distal phalanx on his left pinky finger. #49ersMemories pic.twitter.com/wXdLjmBzZV

No way Ronnie Lott, the hard-hitting defensive back and staple in San Francisco’s backfield during their four Super Bowl championships in the 1980s, was going to let the hand injury keep him off the field in the Wild Card game against the New York Giants.

So, Lott faced a decision from doctors: put a pin in his finger and a cast over it and wait eight weeks for it to heal, or amputate the tip of the finger off from the first joint up and be able to play right away.

Sure enough, Lott picked option B, amputation, and parted ways with his pinky. Doctors numbed it, sliced it off and put it in a cast.

One week later, Lott was back in action in the 49ers’ 17-3 loss to the Giants, which eliminated them from the postseason.

Two weeks after that, the cast came off and Lott finally looked at what was left of his smallest finger. He wasn’t happy, according to this Sports Illustrated quote.

“I was trying to laugh it off, but I felt sick,” he told the Associated Press in 1986. “I tried to stand up, but I broke into a cold sweat. It was just a total shock. I thought, ‘Oh, man, I should have had the pin put in.’… We are losing the compassionate side of sports. We’re becoming gladiators. If I ever become a coach, I hope I never lose sight of the fact that players are people. They feel. They have emotions. I could have all of Eddie DeBartolo’s corporations and it isn’t going to buy me a new finger. It has given me a new perspective on life.”

Can you imagine someone doing this today? In the NFL, NBA, NHL or MLB? Would they be revered as hero or thought of as maniacal? I’m gonna take a wild guess and say Tom Brady would never chop off his index finger (nor would Gisele let him). But apparently this Vikings long snapper had no problem playing without the tip of his pinky against the Los Angeles Rams in 2018.

Heck, Earl Thomas gave a different type of finger to the Seahawks and Pete Carroll when he tore his ACL. NFL players should never put their teams before themselves. Ever. Go get paid. Go make your living. Go feed your family.

Clearly, Ronnie Lott didn’t need his pinky. After that offseason, he was named first-team All-Pro in five of his next six seasons. The former University of Southern California All-American and 1981 NFL Draft first-round pick finished his professional football career with 1,146 tackles, 63 interceptions, five touchdowns and 10 Pro Bowl selections in 14 NFL seasons.

Maybe he could sniff out routes of wide receivers so well because he was one in high school growing up in Rialto, California. The two-way football player stuck to defense during his college football career at USC, and it worked out pretty well for the Hall of Famer.

Lott won four total Super Bowls, including back-to-back titles from 1988-89, and concluded his career with the Los Angeles Raiders and New York Jets. He was inducted into the Pro Football Hall of Fame in 2000 and made the NFL’s All-1980s team along with teammates Joe Montana and Jerry Rice.

Lott is considered not only one of the best safeties but one of the best defensive players in NFL history alongside legends like linebacker Lawrence Taylor, defensive lineman Reggie White and defensive backs Rod Woodson, Ed Reed and Deion Sanders.

Ronnie Lott was a legend for his bone-crushing hits — like the one he laid on Cincinnati Bengals’ Ickey Woods in the 1989 Super Bowl — and his knack for chasing down defenders, but his best story will be the one where he he amputated his pinky finger because he loved football and winning so much.

This article was originally published August 21, 2019 but Lott’s pinky story is still a wild one.

MORE: Patrick Willis Retired in His Prime, But Where is He Now?