If you watched him growing up, you know Bo Jackson is a transcendent athlete. Give him the football, and he'll run right through you or just simply leap over you a la "Bo Over The Top." He was so freakishly athletic that in high school he won two Alabama state championships in the decathlon. Don't even get me started about his reported 4.12 40-yard dash.

That the 1985 Heisman Trophy winner at Auburn University was able to transition from college football and life in the NFL as a Los Angeles Raiders into professional baseball was already incredible. But clubbing 141 home runs and playing for eight seasons in the MLB with the Kansas City Royals, Chicago White Sox and California Angels? Unheralded.

Speculate all you want, but Kyler Murray would have no shot stacking up against Bo Jackson on the baseball diamond. The man who in 1989 swatted 32 home runs and 105 RBIs en route to an All-Star Game appearance and MVP votes could mash like Babe Ruth and run like Usain Bolt.

It was back on September 14, 1986, that he announced to the world with authority that Bo knows baseball. 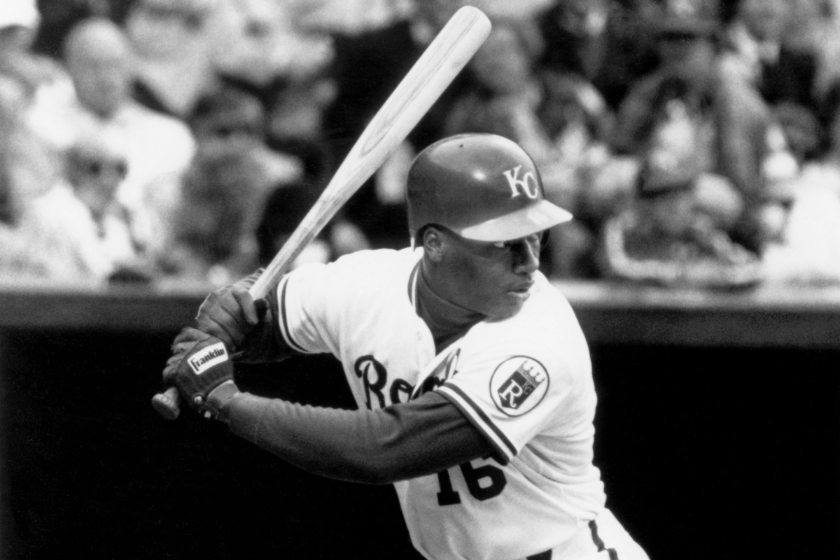 The longest home run ever belongs to Joey Meyer, who sent a ball 582 feet at Mile High Stadium on June 2, 1987. Less than a year before that, Bo Jackson cranked a ball that looked like it was going to travel farther.

In the year following the Royals' World Series win, Jackson was called up from the team's Double-A minor league affiliate, the Memphis Chicks, in the latter part of the 1986 baseball season. In his second at-bat, in the bottom of the fourth inning, on a 2-2 count from Seattle Mariners pitcher Mike Moore made a big mistake. Jackson's home run flew 475 feet from home plate at Royals Stadium in Kansas City, landing beyond the centerfield wall.

"It's a home run, and it's almost on the top of the bank in left field. There it is, Bo Jackson's first major league home run! And I mean he crushed it! That might be the longest home run hit in Royals Stadium," the Royals play-by-play announcer said.

According to the Royals, the 475-foot home run by Nike's first multi-sport spokesperson is still the longest home run hit in a regular season game in the stadium's history. Johnny Bench hit one 480 feet to left field during the 1973 All-Star Game.

Jackson would go on to hit 140 more moonshots, lasers and frozen-rope dingers. The College Football Hall of Fame running back and cannon-armed outfielder probably could've hit a lot more had a hip injury not screwed with his Major League Baseball career. It's crazy to think he only played in one playoff series in his entire career.

The game has changed quite a bit since then. Players like Aaron Judge and Giancarlo Stanton routinely hit balls 470+ feet. But for a football player to do something like that on his first home run? Unreal.

Also similar to Judge and Stanton? Jackson's strikeouts in his first few seasons, leading the Royals in whiffs in 1987, according to Baseball-Reference. However, with a legend like Bo, fans remember the good times. Like when he launched a lead off home run for the American League All-Stars in the first inning off Rick Reuschel of the San Francisco Giants. That All-Star game also featured Hall of Famers Cal Ripken Jr. of the Baltimore Orioles, Mike Schmidt of the Philadelphia Phillies and Barry Larkin of the Cincinnati Reds, but the touchdown-scoring slugger from Alabama stole the show. You can still see that highlight played every now and then as its a part of ESPN's top highlight rankings, for sure.

This article was originally published on September 1, 2020, and has been updated since.