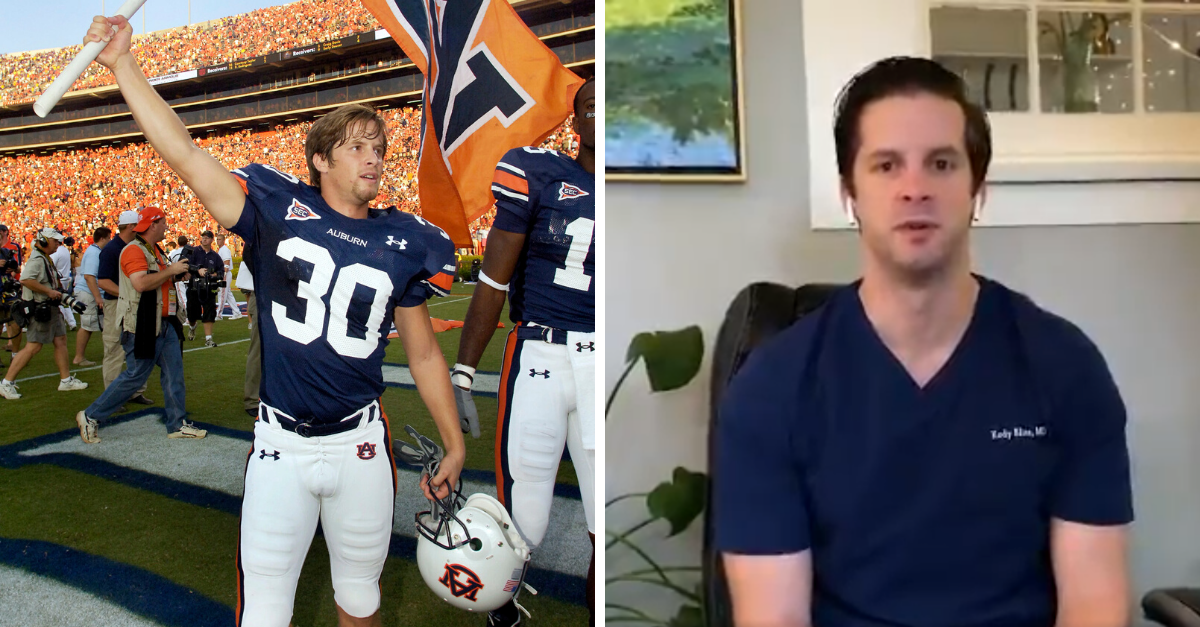 Former Auburn punter Kody Bliss knows what it takes to defeat the fiercest of enemies. The best at his position in school history, Bliss was part of Auburn’s perfect 13-0 season in 2004 under Tommy Tuberville. He can proudly proclaim he never lost an Iron Bowl, even playing in the 2005 Iron Bowl in which the 11th-ranked Tigers sacked the 8th-ranked Crimson Tide 11 times and won, 28-18.

The All-SEC special teams player went unselected in the NFL Draft after setting Auburn’s career record for average yards per punt in 2006 and briefly played in the Canadian Football League before he found his true calling. Kody Bliss now fights something way stronger than Alabama’s defensive linemen, LSU’s defensive backs, Georgia’s linebackers or anything else the Southeastern Conference has to offer.

Bliss is on the frontline in America’s fight against a global pandemic that has already killed more than 50,000 and infected more than one million United States citizens. After contracting the deadly coronavirus himself, he’s determined to help others survive.

After his NFL dreams began to fade away, Bliss went back to school (at a rival SEC school nonetheless) to pursue a career in the medical field.

He graduated from Auburn University with a degree in marketing then graduated from the University of Alabama‘s School of Medicine with a doctor of medicine in 2017. He’s currently completing his residency training in emergency medicine at LSU Health in Baton Rouge, Louisiana. Yes, the same school who in 2004 lost a 10-9 thriller to Auburn while Bliss watched from the sidelines.

Bliss finds himself in the trenches now. In an unprecedented time where nurses, doctors and everyone else fighting COVID-19 are being lauded as heroes, Bliss deserves more applause for helping the sick than he ever received for a booming kick at Jordan-Hare Stadium.

“I’ve always been attracted to the sickest people,” the former college football punter told ESPN and SEC Network’s Marty Smith. “I want to take people that are taking part of the worst day, the worst thing going on, and actually help them get better. That’s what drew me to medicine.”

Kody Bliss was an All- @SEC punter @AuburnFootball from 2003-2006. He is now a doctor on the front lines of the COVID-19 pandemic, @LSU Health in Baton Rouge.
This is @SEC Sidelines to Front Lines.

(Yes, I'm aware my hair is wackier even than normal. I cut it myself) pic.twitter.com/M0nZ6Ub6qw

Two hundred and two times. That’s how many times Bliss took the snap and booted the ball to the sky to flip the field for Auburn and pin the defense against the end zone.

Punting and playing in the SEC, it turns out, is a lot like helping sick patients.

“You kind of come in a little timid, a little nervous,” Bliss told Smith. “But with all the knowledge and the tools there you just have to get comfortable.”

Bliss Contracted Coronavirus And Beat It

The fight against the coronavirus pandemic became personal to Bliss in February. He tested positive for COVID-19, and after experiencing shortness of breath and general aches and self-quarantining for 15 days, he could finally return to work.

Despite likely obtaining the virus from patients, he was more eager to get back to the hospital than he likely had ever been to take the field in Auburn.

“I want to be the first one in to every room,” Bliss told Smith. “For me with my team, if someone’s taking a cough to the face right now, it should be me.”

Breathing down his neck is not a new phenomenon for Kody Bliss. Defensive linemen, linebackers, safeties and cornerbacks used to do it to him every Saturday.

At LSU Health, though, that breathing can be more deadly than ever. The Centers for Disease Control and Prevention says that COVID-19 can be transmitted when an infected person sneezes, coughs or speaks.

No matter your SEC team rooting interests, Bliss deserves all of our salutes.