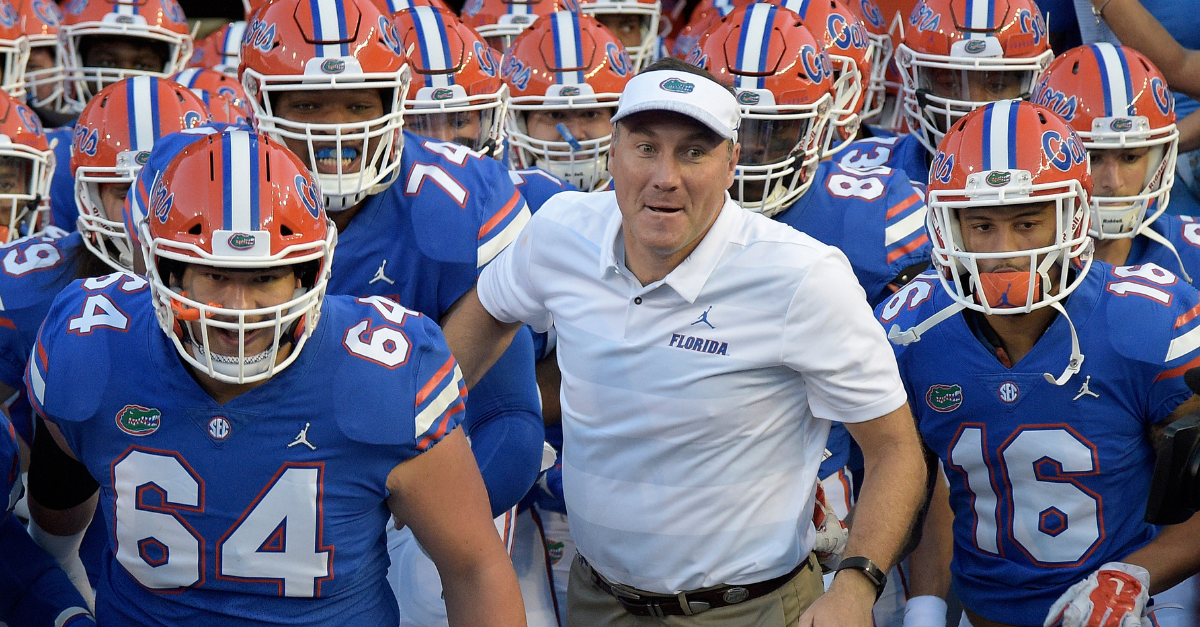 Dan Mullen has turned over a new leaf in Gainesville. The Florida Gators and their fan base have a renewed sense of pride and hope heading into the 2019 season following a successful 2018 campaign that ended with a 41-15 Peach Bowl win over Michigan.

This season’s schedule features the usual rivals in Georgia, LSU, Florida State and Tennessee (the latter two are home games). Oddly enough, it also features three bye weeks thanks to Florida’s season opener against Miami in Orlando being moved to Aug. 24.

Time to make more #SwampMemories with @GatorsFB this fall – ain't nothing like it!

RELATED: The Biggest Steal of the 2019 NFL Draft Will Be a Florida Gator

If the Gators want any chance at playing in their first ever College Football Playoff, they’re gonna need a big year from starting quarterback Feleipe Franks. They’ll also need to take care of business away from Ben Hill Griffin Stadium, as four of UF’s five toughest games on its 2019 football schedule are either on the road or at a neutral site and involve a number of conference games.

Towson went 7-5 last year in the FCS’s Colonial Athletic Association. The Tigers have just one single win over an FBS program — a 33-18 win over UConn in 2013.

Tune into what’ll likely be SEC Network on Sept. 28 and you should find that number staying the same in 2019.

We mic'd up junior safety Devan Hollins yesterday for the last Skyhawk Spring @UTM_FOOTBALL Update! Check out the safety at work to close out spring practice!
📽: https://t.co/8C9NiG9GQn

I could tell you that the University of Tennessee Martin is an FCS team that went 2-9 last year and doesn’t stand a chance against Florida. Or I could tell you something far more interesting, like how the Skyhawks coaching staff features a former Gator.

Every rivalry has something — a brawl, a comment — that sparks it. Could last year’s screaming match between Florida and Vanderbilt have been that?

Maybe tensions are still looming between Mullen’s staff and Commodores coach Derek Mason’s. Maybe this is all water under the bridge. I’m hoping it’s the former and the teams find a way to spice up a boring series in which Florida has won 27 of the last 28 meetings. Please.

Is there anyone with a cooler life right now than Cannon Mullen? pic.twitter.com/G18R0K2Zb2

Oh, how the mighty have fallen. Two or three years ago, I would’ve ranked the Seminoles at the top of this list. In 2019, they’re hardly a blip on Florida’s radar.

Willie Taggart was, um, unsuccessful in his first season in 2018. The garnet and gold limped to a 5-7 record, didn’t play in a bowl game, and suffered a 41-14 thrashing from the Gators. This year doesn’t exactly look promising for FSU either.

Also known as the “Sunshine Showdown,” the heated Florida-Florida State rivalry might not be as epic as it was during the Bobby Bowden and Steve Spurrier days in the 1990s. If last year’s game was any sign, we’ll at least get some kind of show.

Nothing about the Gamecocks really wows you. Senior quarterback Jake Bentley is back at the helm of the offense, but he led all Southeastern Conference quarterbacks in interceptions last year. Plus, star receiver Deebo Samuel is gone.

For one reason or another, Florida hasn’t found recent success in Williams-Brice Stadium. The Gators have lost three of the last four in Columbia, South Carolina. Florida’s 35-31 win last year was close, and this one could be similar.

The “Third Saturday in September” has produced a number of awesome games and its fair share of trash talk.

Remember when UF corner Quincy Wilson said the Gators were going to win in 2016, because “ducks don’t pull trucks” and promptly lost 38-28? How about Will Grier’s miraculous touchdown in 2015 or the 2017 last-second “Heave to Cleve” hail mary that sent Tennessee back to Rocky Top?

Last year’s matchup wasn’t as fun, as the Gators throttled the Volunteers 47-21. That may be the case this year, too.

Mizzou lost quarterback Drew Lock to the 2019 NFL Draft, but don’t expect much of a dropoff, if any, in Columbia. Clemson transfer Kelly Bryant will take over for Lock and could be just as dynamic.

Lock torched the Gators last year to the tune of 250 yards and three touchdowns in an ugly 38-17 UF loss. Bryant threw for 2,802 yards and rushed for another 665 for Clemson in 2017. Depending how he adapts to the new SEC environment, Bryant could be just as much of a headache for Mullen and the Gators.

All eyes will be on Florida and Miami’s season opener in Orlando for the Camping World Kickoff game on ESPN. The game was pushed up to “Week 0” on Aug. 24 and is the lone game that weekend.

It’s a shame the Miami Hurricanes and Gators don’t play every year like they used to (that ended in 1988), and instead play intermittently. This rivalry features one of the more odd plays in college football history. The 1971 Gator Flop featured Florida’s entire defense falling to the ground so they could get the ball back late in the game and let quarterback John Reaves break the NCAA all-time passing yards record.

Miami is far from what it was in the 1980s. Issues at quarterback have hindered them in recent years (UF can relate). But the ‘Canes were a top five defensive team last year and replaced Mark Richt with Manny Diaz. Regardless of the final score, this should be a fun one.

There’s no doubt the Auburn Tigers underperformed in 2018. Even with a now departed quarterback Jarrett Stidham, the offense sputtered against SEC teams. On paper, it would appear Florida football is the superior team.

But Auburn could be an offensive juggernaut if freshman quarterback Bo Nix, who was the second-ranked QB in the 2019 class, is the starter and plays anything like his ranking indicates.

Auburn has won four of the last five against UF, three of which were upset victories over a top-five Gators team. Will 2019’s edition follow that pattern?

What the heck happened to that 31-game winning streak? Now all of a sudden the Wildcats are Florida’s third-hardest game. What gives?

Mark Stoops might be transforming Big Blue Nation into more than just a basketball powerhouse, as Kentucky turned in what some would call a breakout season in 2018 at 10-3. The Cats lost their best players — linebacker Josh Allen and running back Benny Snell Jr. — but at least return quarterback Terry Wilson.

The real question for Kentucky is their defense. They limited opponents to less yards per game than LSU or Florida. UF scored just 16 points at home against them last year. If Stoops is able to replicate some of that success, this could be another challenging one for the Gators.

There’s really no telling what the outcome of this game will be. The higher-ranked team has lost in each of the last three years, including No. 22 Florida’s 27-19 win over No. 5 LSU last year and No. 21 Florida’s 16-10 win over No. 16 LSU in the 2016 Hurricane Matthew-postponed, goal-line stand thriller in Baton Rouge.

This game has the potential to be just the second top-10 matchup in the rivalry since 2010. LSU head coach Ed Orgeron has strung together some strong recruiting classes and the Tigers were a top-25 defensive team last year (UF was 28th). They lost key defensive players like linebacker Devin White and cornerback Greedy Williams, but so did Florida in safety Chauncey Gardner-Johnson and defensive end Jachai Polite.

Death Valley is never an easy place to play. Expect a low-scoring nail-biter and some kind of drama.

If there were ever a game to be circled on Dan Mullen and Kirby Smart’s calendars, it’s the “World’s Largest Outdoor Cocktail Party” in Jacksonville, Florida. No, not because they’ll be sipping vodka cranberries or downing Fireball shots (at least I don’t think).

Mullen has been trolling Georgia throughout the offseason, even taking shots at their national championship drought during Florida’s spring game in April. The fact that these two teams were both ranked seventh in the AP Top 25 at season’s end following a UGA Sugar Bowl loss to Texas makes this matchup even more interesting.

The Bulldogs are a great team. They’re led by junior quarterback Jake Fromm. Dynamite recruiting classes have kept them atop the SEC East. But Florida made great strides in Mullen’s first year. Franks improved and much of his game may hinge on his play. A few big defensive plays by UF and you never know.

Recent history has shown the winner of this rivalry game goes on to to play Alabama in Atlanta for the SEC Championship game. This could be the year Florida regains the throne in the East for the first time since 2016. Let’s just hope this Florida football schedule isn’t too daunting.