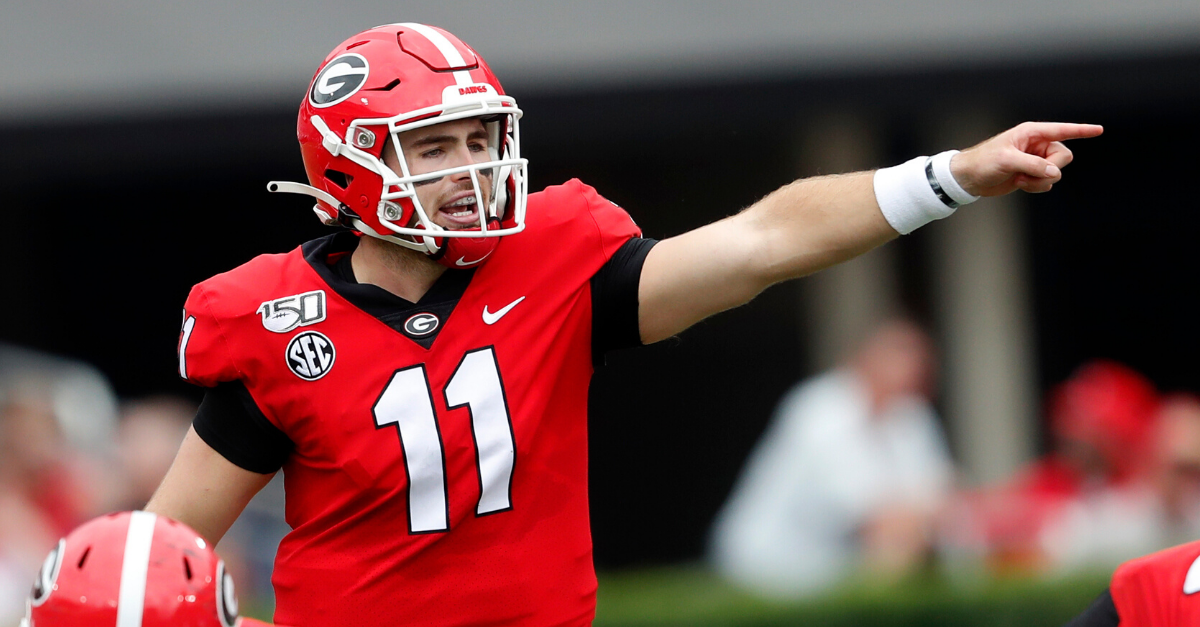 When All-SEC kicker Rodrigo Blankenship’s 42-yard field goal attempt curled left of the goalposts in double overtime, the college football world was set ablaze. The then-No. 3 Georgia Bulldogs lost, 20-17, to the South Carolina Gamecocks in a home game the Dawgs were favored to win by 20.5 points.

UGA out-gained South Carolina in total yards, 468-297. UGA had 30 first downs compared to South Carolina’s 16. UGA held the ball for over 36 minutes of time in regulation. But football’s great equalizer, the turnover battle, doomed Georgia. Four giveaways by the Bulldogs flipped the script at Sanford Stadium, and a late-game miscue ultimately handed head coach Kirby Smart and the gang their first loss to an SEC East opponent since October 29, 2016.

The normally automatic Rodrigo Blankenship misses in 2OT and the Gamecocks pull off the upset!#SCvsUGA pic.twitter.com/ez83W3MOKO

Not only did Georgia lose, they lost the confidence of just about everyone in college football.

The Dawgs dropped to No. 10 in AP Poll. Fitting considering South Carolina is a .500 football team fighting to become bowl eligible, but UGA came out of this home loss ranked below Notre Dame, a team they beat just a few weeks before.

A lot of people are writing Georgia out of the College Football Playoff. One loss, an ugly one at that, dropped the Bulldogs from contender to “the other guys” in a tightly-contested SEC race. I’m here to tell you that this mid-season loss makes the Bulldogs even more dangerous the rest of the way, and there are three reasons they’re very much a threat to win a national title.

This is an obvious statement, but I’m saying it anyways: There’s no room for error the rest of the way. One more loss and Georgia goes from SEC juggernaut to missing the playoff, losing out on a Sugar Bowl bid, and potentially playing in the Outback Bowl.

One look at Georgia football’s remaining schedule, and you begin to see a very promising path toward the program’s third-straight SEC Championship Game appearance.

Home games against Kentucky Wildcats, Missouri Tigers and Texas A&M Aggies bring unique challenges, but all are very winnable considering Georgia’s talent. A road game against the Auburn Tigers on November 16 likely puts the Bulldogs on prime time for the country to see, and a win at Jordan-Hare Stadium is an awesome resume booster. “The World’s Largest Cocktail Party” in Jacksonville against the Florida Gators, a game that usually produces the SEC East division champ, is massive, but again, very winnable.

Apologies ahead of time to the Georgia Tech Yellow Jackets. The rebuilding ACC program is going to get smoked in a rivalry game known as “Clean, Old-Fashioned Hate.”

If Georgia wins out and takes the SEC Championship Game, would the CFP committee leave them out because of a double-OT loss in October? Doubtful.

Offense is all the rage. High-flying SEC teams like Alabama and LSU steal the spotlight, but Georgia’s defense is the talented foil to whomever they play.

Here are UGA’s national rankings on defense through six games:

Georgia held Notre Dame ? a team averaging 39.2 points per game, ranked 14th ? to only 17 points. With Eric Stokes and J.R. Reed patrolling the back end, Monty Rice manning the middle, and redshirt freshman Azeez Ojulari emerging as one of the SEC’s best edge rushers, there’s no reason why this defense can’t shut down the very average offenses they’ll face the rest of the regular season.

Once a Heisman Trophy favorite and Maxwell Award candidate, the junior quarterback hasn’t jumped off the page statistically like Alabama’s Tua Tagovailoa or LSU’s Joe Burrow, but he’s still an NFL quarterback in the making.

Fromm’s third season leading Georgia’s offense offers a level of experience and poise ? particularly pre-snap at the line of scrimmage ? that few other teams possess. Fromm completed 70 percent of his passes through six games, and he was only sacked four times.

Remove one of the worst games in his career versus South Carolina ? he tossed a career-high three interceptions and a quarterback rating of 98.2 was his second-lowest in a Georgia uniform ? and Fromm is still the quarterback you want when the right decision needs made.

You ever hear the saying about backing a dog into a corner? What happens?

Georgia is dangerous. Hell, they were dangerous before, but Kirby Smart and company were caught off guard against Will Muschamp’s Gamecocks. On talent alone, the University of Georgia Bulldogs football team competes with anyone in the country. But now, they’re motivated, focused, and on edge.

Still doubting the Dawgs? Wait and see what they do the rest of the way. Come December, the SEC champions and college football’s hottest team might be residing in Athens, Georgia.