College football is full of acronyms, and if you are new to the world of collegiate athletics it can get a little confusing. You probably know the NCAA stands for the National Collegiate Athletic Association or that the SEC stands for the Southeastern Conference. Those are easy.

The one acronym not many people have mastered is FBS, which is just one of two ways the NCAA divides its Division I schools up. The other D-I classification is FCS.

Beyond Division I, the NCAA also has a Division II and Division III. Junior colleges play separately in the National Junior College Athletic Association. Across the NCAA's three divisions, nearly 700 football programs suit up and take the field each year.

So what does FBS stand for? Keep reading, and head back to Google if you're looking for whatever Fetal Bovine Serum is.

Bowl Mania: The Makeup of the FBS

All 131 FBS regular season wins are available for this College Football season ?

What team totals are you eyeing down? pic.twitter.com/EK4HFSkSWx

The NCAA's Division I is further divided by the FBS and FCS. FBS stands for Football Bowl Subdivision and it gets its name for the numerous bowl games that teams play in at the end of each season that generate hundreds of millions of dollars.

In total, there are 10 conferences and 131 FBS teams. Five of the conferences make up what's called the Power 5. That includes NCAA Division I teams from the SEC (Alabama, Florida, Georgia, LSU, Arkansas, Vanderbilt, Kentucky, Missouri, Tennessee, Mississippi State, South Carolina), Big 10 (Ohio State, Michigan, Penn State, Indiana, Iowa), Pac-12 (Oregon, Stanford, Utah), Atlantic Coast Conference (Clemson, Miami, Florida State, North Carolina) and the Big 12 (Oklahoma, Texas, for example). Those last two will be moving to the SEC soon, and USC and UCLA will soon join the Big Ten. Seeing how much conferences have changed over the past couple of years, we'll be seeing more megaconferences sooner than later with the SEC and Big Ten leading the pack.

The five other conferences are the American Athletic Conference (AAC), Conference USA, Mid-American, Mountain West and Sun Belt. Teams like Cincinnati and Houston are in the AAC (though, they'll join the Big 12 next year), while Appalachian State, Georgia State, Georgia Southern, Troy and Coastal Carolina are in the Sun Belt.

Some programs are considered independent without conference but are still FBS schools (Notre Dame, Army and BYU, for example). Again, this could all change very soon with the new age of conference realignment. Notre Dame will be joining a conference sooner than later, most likely the Big Ten or ACC. While BYU is set to join Cincinnati, Houston and UCF in the Big 12.

Stop me if you've heard this before, but many FBS football programs change conferences. Take Texas A&M, for example. The Aggies previously played in the Big 12 and Southwestern Conference before joining the SEC in 2012. Oklahoma and Texas are also set to join the SEC in the near future following a massive announcement in 2021. USC and UCLA shocked the sports world when they announced they'd be leaving the Pac-12 to join the Big Ten, presumably in 2024. Personally, I can't wait to see the LA teams travel to play Minnesota in November.

The College Football Playoff is the annual postseason four-team tournament that was first played at the end of the 2014 season. It looks inevitable the playoff field will expand at some point, but we'll be seeing the four-team format until at least 2025. Prior to that, the Bowl Championship Series (BCS) national championship game determined a lone winner. The CFP pits the top four ranked FBS programs (ranked by a CFP committee) against each other in a knockout-style tournament to determine the national champion.

FBS programs come in all shapes and sizes and can be found across the United States. There are currently nine states without an FBS program: Alaska, Delaware, Maine, Montana, New Hampshire, North Dakota, Rhode Island, South Dakota, Vermont and then a district -- Washington, D.C. 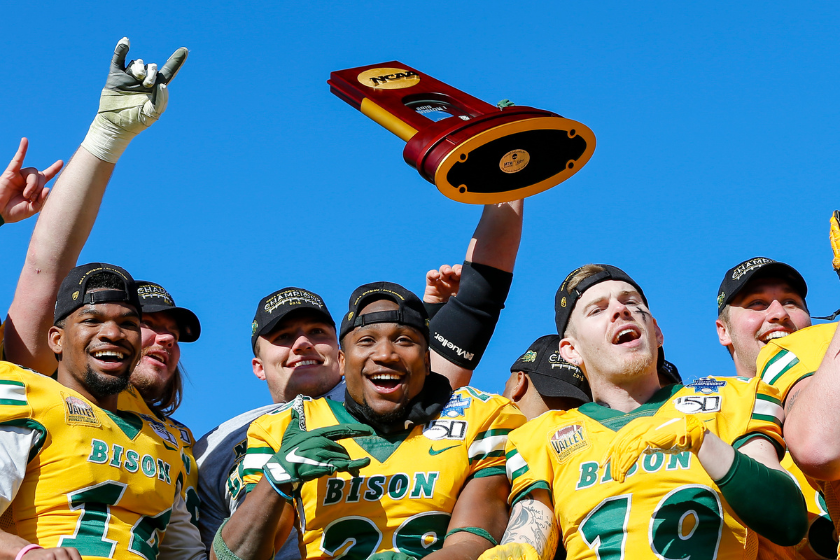 RELATED: The FCS Playoffs are How a College Football Postseason Should Be Played

The FCS is the other subdivision of NCAA's Division I. It stands for Football Championship Subdivision and was known as Division I-AA from 1978-2005.

The main difference between FBS and FCS is how a final winner is determined. The FBS has the four-team College Football Playoff while the FCS hosts a 24-team playoff for the NCAA D-I Football Championship. North Dakota State, notable for producing NFL quarterbacks Carson Wentz and Trey Lance, has won the most of these championships (9) of FCS programs.

FCS teams can only have 63 players on scholarship, while FBS football teams can have 85. These FCS schools usually play 11-game schedules while FBS programs play 12 each, though the coronavirus pandemic altered that during the 2020 season.

So there you have it. Now the next time you're watching an NCAA game you can show off your knowledge and explain to your friends the difference between FBS and FCS and what each of them mean.

This post was originally published on December 27, 2019, but we brought it back for the college football season to help you impress your friends.

MORE: College Football's Longest Field Goal Was Kicked From Behind the 50-Yard Line