Jamal Murray is a Star Now, But He’s Been Getting Buckets for Years 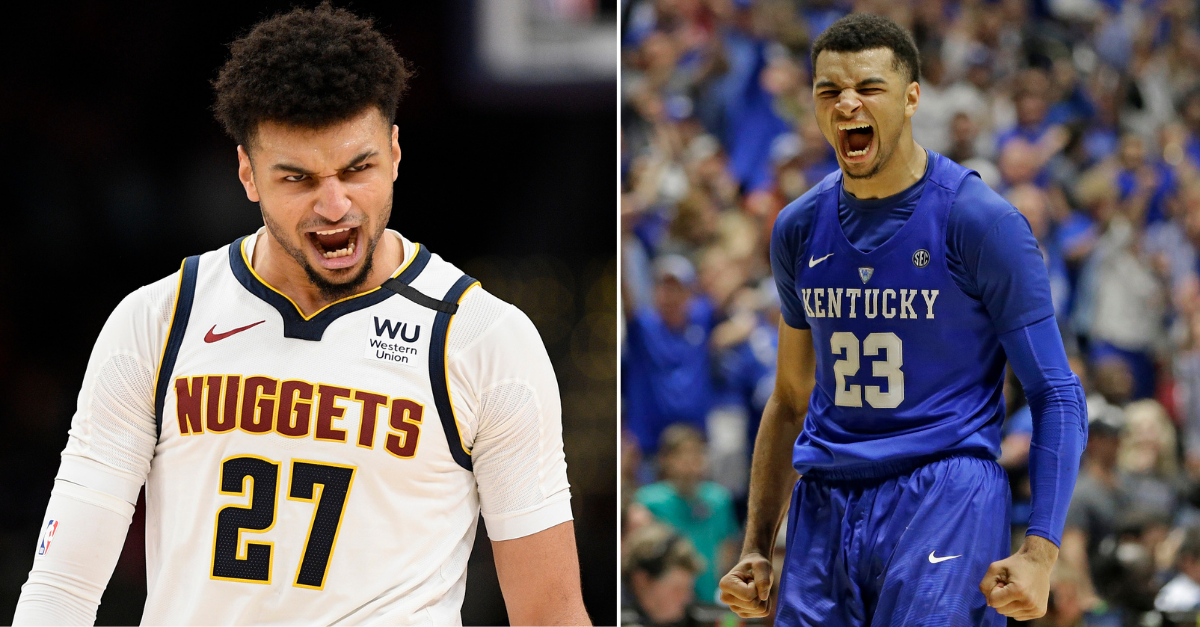 I was unaware there were active volcanoes in the Rocky Mountains. I’ve been there a few times, and it can only be described as pretty freaking chill.

Volcanic activity traveled from the Denver area to Florida, where Jamal Murray erupted in the first round of the 2020 NBA Playoffs against All-Star Donovan Mitchell and the Utah Jazz. The Nuggets point man averaged 31.6 points, including two 50-point games, and cashed 32 threes in the seven-game series to overcome a 3-1 deficit and advance to the second round of the postseason.

In his first four NBA seasons, the Denver Nuggets point guard has struggled to string together consistent performances. So, there were some concern when Denver signed him to a 5-year, $170 million extension last summer.

Murray proved he was worth the lucrative deal during his seven-game explosion, but he’s always had this potential.

Jamal Murray was born and raised in Kitchener, Ontario, Canada, just outside of Toronto, and attended Grand River Collegiate Institute. He later transferred to Orangeville Prep in Orangeville, Ontario to finish his high school career. At the 2015 Nike Hoop Summit, Murray scored 30 points and was named the MVP.

A five-star recruit with his pick of the litter, Murray committed to play college basketball for John Calipari and the Kentucky Wildcats over Oregon.

Jamal Murray was UK’s top scorer with 20 points per game while shooting 45.4 percent from the field, 40.8 percent from 3-point range, and 78.3 percent from the free-throw line. Number 23 notched a majority of his points by finding openings to the rim and eluding defenders. He scored a career-high 35 points in a home matchup against Florida on February 6, 2016.

Teamed up with Tyler Ulis, Isaiah Briscoe, and Alex Poythress, the Wildcats finished the regular season 23-8 (13-5 SEC) and entered the Southeastern Conference Tournament as the No. 2 seed behind Texas A&M. After victories over Alabama and Georgia, Kentucky beat the Aggies 82-77 in overtime to win the conference championship. The Wildcats earned a four-seed in the 2016 NCAA Tournament.

Murray scored 19 points in an 85-57 first-round win over Stony Brook. They faced fellow powerhouse Indiana in the Round of 32 and fell 73-67.

The guard declared for the 2016 NBA Draft shortly after the season. The Phoenix Suns, Minnesota Timberwolves, and New Orleans Pelicans all passed. The point guard/shooting guard was selected seventh-overall by the Denver Nuggets in a pick from the New York Knicks. He made the NBA All-Rookie Second Team in 2017.

Murray, Mitchell, Dallas Mavericks guard Luka Doncic, and Portland Trail Blazers point guard Damian Lillard have been the stars in Orlando so far. Murray is the only one of the group still playing.

Denver now faces the Los Angeles Clippers in the Western Conference semifinals. Basketball fans and analysts, including Sekou Smith of NBA.com to Mike Schmitz of ESPN, are eager to see if Murray’s hot streak continues.

MORE: The NBA?s Virtual Fans Are Incredible. Here?s How to Become One