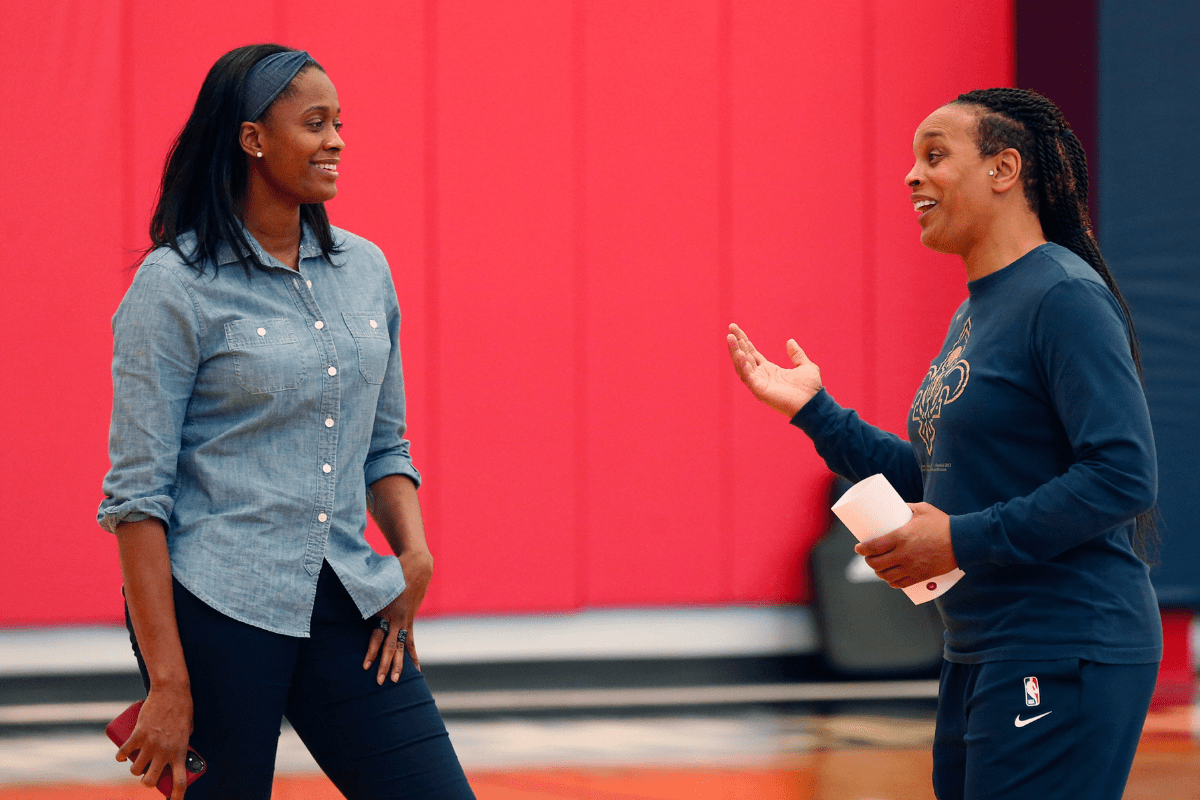 Swin Cash is a winner.

She’s done it in college, the WNBA, and on the international stage. The New Orleans Pelicans are banking the four-time WNBA All-Star will bring that attitude to the Big Easy.

In June 2019, the NBA franchise brought on Cash as the Vice President of Basketball Operations and Team Development.

RELATED: Sue Bird?s Net Worth: How the WNBA Queen Made Her Millions

A native of McKeesport, Pennsylvania, Cash shined at McKeesport Area High School and earned a women’s basketball scholarship to the University of Connecticut.

In four years at UConn, her career took off. She took that momentum to the WNBA, where she was selected No. 2 overall by the Detroit Shock in the 2002 WNBA Draft.

Here are the highlights of her decorated career:

In addition to the Shock, the forward played for the Seattle Storm, Chicago Sky, Atlanta Dream, and New York Liberty. She ended her playing career in 2016.

In her post-playing days, the former WNBA star stuck with the Liberty in the front office position of Director of Franchise Development. She’s also served as a basketball analyst on Turner Sports, CBS Sports, and NBA TV.

The two-time NCAA champion was named to the Women’s Basketball Hall of Fame Class of 2020. The announcement was made on the ESPN broadcast of UConn vs. South Carolina on February 10, 2020.

David Griffin hired Swin Cash to his staff in his first few months as the Pelicans’ Executive Vice President of Basketball Operations. Griffin, who served as general manager for the Cleveland Cavaliers from 2014-17, expressed his excitement in the team’s official statement:

?We are beyond thrilled to welcome Swin Cash and her family to the New Orleans Pelicans,? said Griffin. ?Her legendary experience as a player, champion and winner at every level, on and off the floor, represents everything we want this organization to be about. In addition to her background as an executive with the New York Liberty, Swin has a strong reputation as a thought leader in the area of player and human development and her work as a global NBA/WNBA ambassador speaks to her incredible relationships throughout the League family.?

In Cash’s tenure, the team has drastically changed looks. Anthony Davis was dealt to the Los Angeles Lakers for Lonzo Ball, Brandon Ingram, Josh Hart, and three first-round picks. The squad took Zion Williamson with the first-overall pick in the 2019 NBA Draft. Head coach Alvin Gentry was fired and replaced by Stan Van Gundy. Point guard Jrue Holiday was traded to the Milwaukee Bucks in a four-team trade with the Oklahoma City Thunder and Denver Nuggets.

Griffin is reshaping the team to build around Williamson. With a fresh head coach and young roster, the Pelicans aim to be in the mix for a playoff spot in the brutal Western Conference for years to come.

Cash’s job is to develop the group into a competitive and cohesive unit. Given her championship experience, she knows what it takes.

MORE: Becky Hammon Deserves to Be an NBA Head Coach