He marched into Madison Square Garden and shushed New York Knicks fans during the 2021 NBA Playoffs. Then, he traveled south to Philly to knock out the No. 1-seeded Philadelphia 76ers. The Hawks' magical run came to an end when they fell to the eventual NBA Champion Milwaukee Bucks in the Eastern Conference Finals, but Young is still focused on bringing an NBA championship to the Atlanta Hawks for the first time since 1958.

He hasn't been able to do it without the support of his parents and fiancee. Not much is known about the latter, so let's find out who she is and learn about the growing Young family.

Let's find out who she is.

The NBA star met his longtime girlfriend Shelby Miller during his lone year at the University of Oklahoma. Miller, who is three years his senior, was on the cheerleading squad.

While Young was tearing up Big 12 opponents on the Oklahoma Sooners basketball team, Miller was his biggest cheerleader. Young's ex-girlfriend, Crymson Rose is dating former OU receiver and current Dallas Cowboy CeeDee Lamb. Rose made waves when she famously tried to snatch Lamb's phone during the 2020 NFL Draft. We're sure Donovan Mitchell had some things to say on Twitter about that.

Miller hails from Norman. Her mother Sherri works at the University of Oklahoma and her father works in the automotive maintenance industry.

It seems Young and Miller live normal 20-something lives in Atlanta, Georgia. They go to their fair share of weddings, they post TikTok videos and one of them is a multimillionaire.

Young decided to take the next step in the relationship when he got down on one knee and asked Miller to be his wife. The 23-year-old NBA player shared the news in an Instagram post with a short and sweet caption that said, "What a night. #FutureMrsYoung." In our heads, Rod Stewart's "Forever Young" was playing in the background as Trae slid the engagement ring on her finger.

It must be nice getting some "ice" from the man whose first Adidas signature colorway was ice machine-themed.

Tydus Reign Young was born on June 2, 2022, according to Shelby's @shelby_danae Instagram account. Shelby took a prolonged social media break in order to keep her pregnancy a secret. Fans were surprised to see photos of her baby shower posted after Tydus' birth, but if that's the trending theme of the moment, we can't argue with it. The couple has shown off Tydus at multiple Atlanta sporting events including an Atlanta Falcons game where he wore a bib that said "Baby Icicle," a nod to his father's nickname "Ice Trae" and to a Hawks game where Tydus wore his favorite player's jersey. 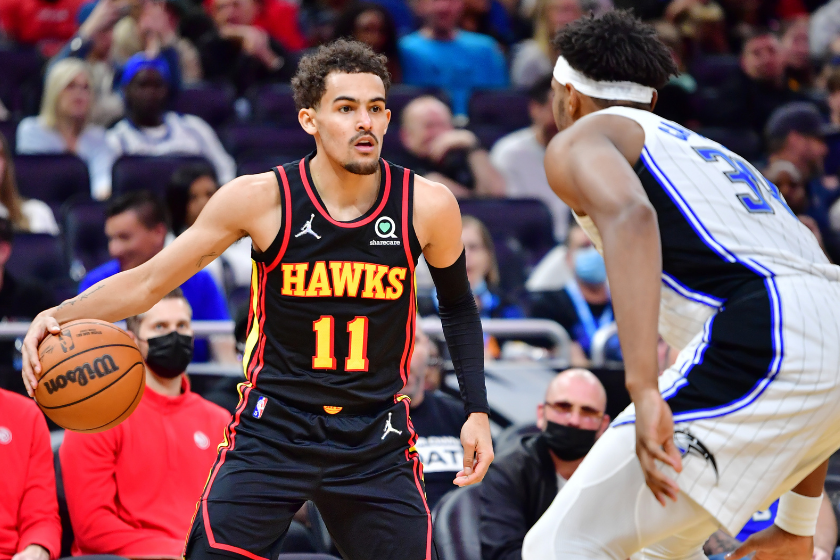 The pro basketball player was born in Lubbock, Texas and moved to Norman, Oklahoma when he was a kid. He grew into one of the best high school players in the country at Norman North.

Young became a superstar at the NCAA level under Sooners head coach Lon Kruger. There wasn't a day that went by where you could turn on ESPN and not see the superstar point guard.

Young entered the 2018 NBA Draft after his freshman year, where he was selected fifth overall by the Dallas Mavericks and immediately traded to the Hawks for Luka Doncic.

Luka's a solid comparison to Trae's play, too. Whether it's a deep three from beyond the arc, a sharp assist to a cutting defender, or even working to get rebounds, Trae Young can do it all.

He's become one of the league's brightest young stars, earning an All-Star appearance and getting a tip of the cap from the likes of the Lakers star LeBron James after leading an upset over the Sixers in the NBA Playoffs.

Young's love life may not be as public as Ben Simmons or Kyrie Irving of the Brooklyn Nets, and he may not frequently post pics of his significant other on social media, but the support from his fiancée has certainly boosted his play on the court.

MORE: Giannis Antetokounmpo & His Girlfriend are Raising an Athletic Family