It's safe to say Pittsburgh Steelers quarterback Ben Roethlisberger has gone through trials and tribulations throughout his football career. He's a two-time Super Bowl champion and six-time Pro Bowl player but has suffered numerous injuries, including an elbow injury that required surgery.

Off the field, he suffered a nasty motorcycle accident during which he wasn't wearing a helmet in 2006. Then of course there were the infamous two incidents in which he was accused of sexual assault in 2009 and 2010. He was even suspended for violating the NFL's personal conduct policy.

Big Ben now appears to be a happy family man when he's not on the football field or dealing with Antonio Brown. He met his wife, Ashley Harlan, through a Steelers fan and married her in 2011. They have three children together.

But as the 38-year-old attempts a comeback from injury, he admitted he's struggled with addiction in the past. 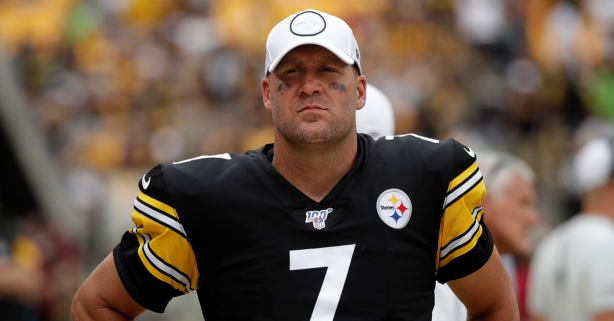 RELATED: Big Ben Met His Wife Through a Fan, Then Had 3 'Killer B' Children

"It's not always easy," Roethlisberger told former Steelers player Tunch Ilkin about his past addictions, per ESPN. "People don't realize all the time that us athletes, we're human. We sin like everybody else. I am no different. We make mistakes. We get addicted to things. We sin. We're human. I think sometimes we get put on this pedestal where we can't make mistakes. I've fallen as short as anybody. I've been addicted to alcohol. I've been addicted to pornography, which makes me then not the best husband, not the best father, not the best Christian I can be.

"But you have to dedicate yourself and understand that you can get out of it because of the grace of God and him saying, 'Listen, you're good enough for me the way you are. You don't have to be perfect.'"

Roethlisberger is obviously far from perfect. He allegedly engaged in sexual misconduct in Lake Tahoe, Nevada, in 2009 and Milledgeville, Georgia in 2010 -- The NFL quarterback was never charged for either incident. Still, it has prompted chatter over his career. He was even ridiculed by Comedy Central's "South Park" as a "sex addict."

Big Ben said during the 90-minute session that he began to lose his way from his faith while in college at Miami (Ohio). He was baptized for the second time in 2017.

"Now more than ever, it's cool to be a Christian, especially professional athletes," Roethlisberger said, per ESPN. "One of the things I want to tell guys and tell people out there, I can be a really good athlete and a Christian. It's not one or the other. I can do both. I want it to be known to all of the young men out there, it's cool to be Christian and be an athlete. Go ahead and be the best athlete you can be and see if you can be a better Christian. And that's what I'm trying to do now. I'm trying to be a better Christian than I am athlete and football player. I push myself every day to do that, and it starts here. It's not always easy."

"I just felt that I needed to do that," he said of being baptized again. "I wanted to have a closer walk, a better relationship with Jesus, my wife, my kids, my family -- become a better person."

Big Ben isn't the only professional athlete that had trouble staying off naughty browsers.

It's an issue that some (well, at least one) teams have addressed publicly. The MLB's Kansas City Royals held an anti-porn seminar during 2018 Spring Training, which was unprecedented.

Of course, alcohol addiction is more commonly talked about. One notable case in football is former New York Jets quarterback Joe Namath, who turned his life around after an embarrassing live TV interview with ESPN's Suzy Kolber.

In her new tell-all book, Stormy Daniels says she was "terrified" by Pittsburgh Steelers quarterback Ben Roethlisberger after Donald Trump introduced the two at a nightclub in 2006 https://t.co/HoYtO4yd8W pic.twitter.com/YLcsBgCgcD

Adult film actress Stormy Daniels revealed a story of Ben Roethlisberger escorting her to her hotel room after she allegedly had sex with Donald Trump in '06. As Daniels detailed in her book, "Full Disclosure," he "terrified" her. Per USA Today:

Daniels, whose real name is Stephanie Clifford, wrote that Roethlisberger requested a "good night kiss," CNN reported. She denied the overture and said he pushed her hotel room door lightly.

"I was terrified. I am rarely terrified," Daniels wrote, adding that Roethlisberger responded, by saying, "'Come on.'"

After she closed the door, Daniels wrote that Roethlisberger "stood outside, not leaving" and knocked several times before, eventually, leaving.

Whew, that is not a good visual. Hopefully, Roethlisberger is a better man than he was in the past. His focus this offseason is on coming back after last year's elbow injury.

As far him stepping forward to talk during the coronavirus pandemic about his past addictions, that takes some guts.