The Best Basketball Programs To Never Win A National Championship 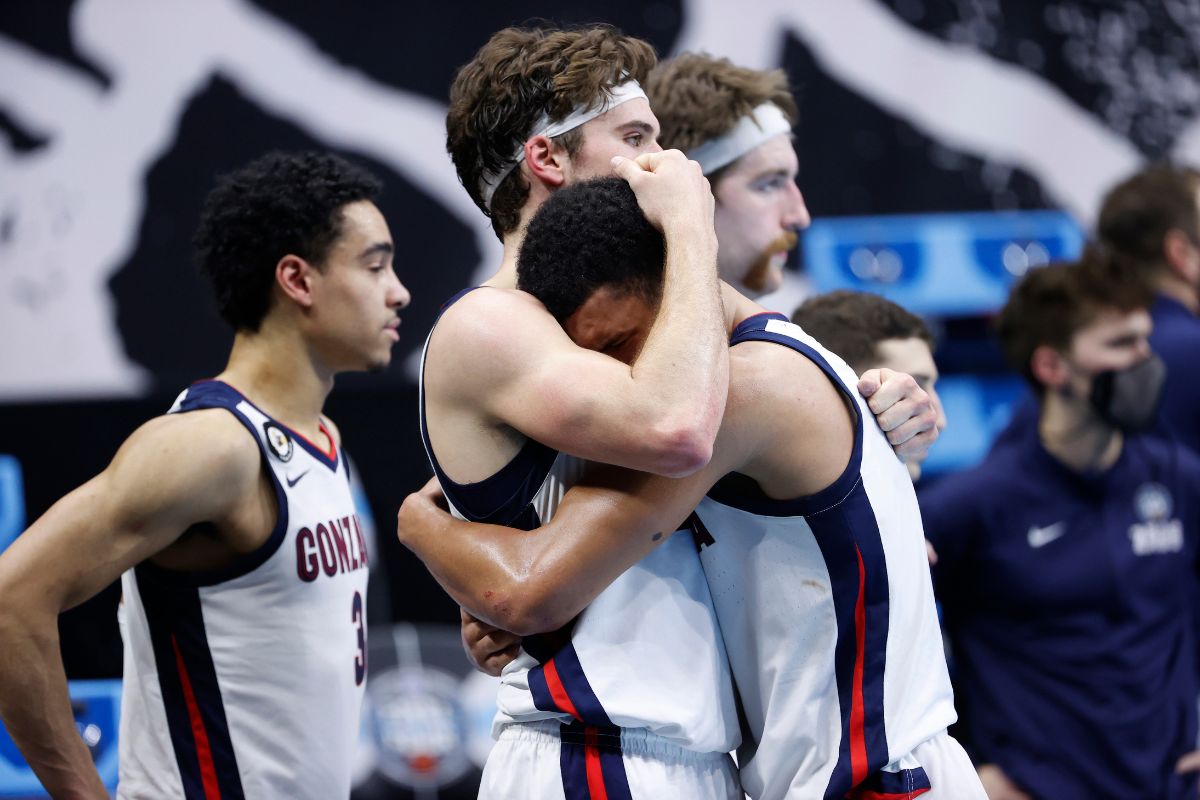 It’s springtime again, so it’ll soon be the most fun sports time of the year: March Madness, the NCAA Tournament. There will be a lot of the familiar faces, big-name programs that threaten for a title year-in, year-out — and frequently win them. But for every UCLA, Duke, Kansas, North Carolina, Kentucky, Syracuse, Villanova, Indiana, Arizona, Maryland, Louisville, or Michigan State, dominant programs with long winning histories, there are plenty of top-tier NCAA basketball schools that have never won a title. For whatever reason, a whole lot of teams that probably should’ve gotten there just…haven’t been able to get over the hump. Heck, a lot of Hall of Fame coaches – Lou Carnesecca, John Chaney, Pete Carril, Guy Lewis, Jerry Tarkanian – have somehow never won a title.

It’s really not surprising that a football school like Auburn, Alabama, or Notre Dame has never won a title — and a couple of football powerhouses like Ohio State, Florida, and Baylor (just last year!) have actually won a national title or two. And likewise, for all their success in the women’s game, it’s not exactly surprising that programs like Tennessee, Texas Tech, Louisiana Tech, or USC have never won a men’s title. But there are some schools where the only appropriate reaction is “wait, what?” when you find out they’ve never actually won even one of them. The Cincinnati Bearcats have two titles, and even Utah and Wisconsin have one apiece, but somehow, the schools on this list have never cut down the nets.

Here’s the team you knew would show up here. The Bulldogs (yes, they have a name other than “‘Zags”) are probably the single greatest example of a school with unfulfilled potential. Gonzaga has made the title game twice, losing both times, but that’s only the start of their woes. The program has been a top-four seed nine times — and a number one seed four times — yet has never won the big game. They’ve thus far been the champions of the men’s college basketball regular season and of the rankings, but not of much else. They’re currently atop the AP Poll again, but they’re the basketball team equivalent of the Buffalo Bills, so let’s see how that goes.

This one genuinely shocked me. I assumed Illinois had won at least one title; after all, they’re inarguably one of the premier programs in the Big Ten. The 2005 national championship game runner-up Fighting Illini might be the best team to not actually win the title, getting upset by UNC. Illinois has been a top-four seed a shocking fourteen times (including four #1 seeds), and have made five Final Fours, but have never won it all.

Poor Memphis. The Tigers had their last two Final Four appearances in 1985 and 2008 vacated thanks to violations that would now (or soon) be considered perfectly fine. The investigation in 2014 brought an end to the long run of success Memphis had enjoyed from the 1980s on. They haven’t made an NCAA Tournament appearance since, though they did win the 2021 NIT.

The Wildcats are the definition of “always a bridesmaid, never a bride.” No school has more Sweet 16 appearances without a national title than K-State, although Notre Dame is tied with them. Unlike Notre Dame, though, the Wildcats have four Final Four appearances — although none since 1964. Considering the school has only produced one NBA first-round draft pick since 1988 (the hugely disappointing Michael Beasley), it’s not surprising they’ve never been national champions.

The Houston Cougars might be the most surprising school on this list. It’s not a school that typically competes for a national title year-in, year-out, but back in the early ’80s, it put together maybe the most talented NCAA team of all-time: Phi Slamma Jamma. Led by future NBA legends Hakeem Olajuwon and Clyde Drexler and stocked top to bottom with talented role players, the school made three straight Final Fours — including two championship games — from 1982-84, and yet somehow could never quite get over the top. Most heartbreaking was a last-second 54-52 loss to unheralded NC State in the 1983 title game, won on a last-second put-back by practically anonymous center Lorenzo Charles.

Wake has always been the weird stepchild of the ACC. They’re usually an also-ran and they’ve only ever made one Final Four (in 1962, no less), but they deserve a mention because they’re a unique case: every 10 or 15 years, they kick up one of the greatest basketball players of all time: first Tim Duncan, then Chris Paul. Still, the closest to a title even Duncan could ever drag them was the Elite Eight in 1996.

Other than the one very obvious exception, the SEC isn’t exactly lighting the world on fire when it comes to men’s basketball titles; aside from Kentucky, only Arkansas (one) and Florida (two) have ever even won it. It’s a football conference, with massive programs like Alabama, Auburn, Georgia, et al. Likewise, we don’t typically think of LSU as a college basketball powerhouse, but they’ve made a surprising number of semifinals: four of them, most recently in 2006. Incredibly, not one of those Final Fours featured either of the two best players in the school’s history: Pete Maravich and Shaquille O’Neal.

The West Virginia Mountaineers are a study in extremes. The school was one of the best programs in the country in the late ’50s and early ’60s, making a national title game and two Sweet 16’s from 1959-63. Then they vanished from the college basketball landscape before a frankly phenomenal run in the last 17 years: since 2005, they have seven Sweet 16 appearances. Still, they haven’t been able to win a title, and only have one Final Four (in 2010) to show for it.

Since 1989, the Longhorns have only missed the NCAA tournament seven times, one of the best marks for any Big 12 team. But in that span, they’ve only made one Final Four appearance — and shockingly, it wasn’t during Kevin Durant’s lone season with the team. The school has three total Final Four appearances, but when UTEP has more national titles than you, it’s safe to say your program has been something of a disappointment. Funny enough, the Texas women’s basketball program has been much better, winning a title in 1986.

The Big East is a very top-heavy conference; UConn has four national titles, Villanova has three, Georgetown has one, and even Marquette has a single banner. But for every Huskies, Wildcats, and Hoyas team, there’s a St. John’s Red Storm. St. John’s has made the Final Four twice (and the title game in 1952), but even Chris Mullin’s 1985 team wasn’t good enough to win it all. New York City’s premier basketball program has never gotten it done.

We tend to think of Oklahoma as a football school, but their college basketball program has had a surprising amount of success. Few Division I programs have made more Final Fours than Oklahoma’s five without winning a single title. More impressively, the Sooners haven’t only been successful during one era; their first Final Four was in 1939, their most recent in 2016, and every single appearance since has occurred during a different decade.

Though the Boilermakers have yet to produce a single NBA Hall of Famer, they’ve cranked out a steady stream of NBA players. Over 30 isn’t exactly UCLA Bruins numbers, but it still puts them among the top 30 or so programs in basketball history. Still, for all that talent, Purdue has never won a title. Their last Final Four was in 1980, but their success isn’t exactly in the distant past: they’ve been a top five seed in each of the last five NCAA Tournaments.

It’s no secret that some of the whitest, most midwestern states are basketball-crazy. Everybody knows about Indiana — unsurprisingly, since they’ve won five titles — but Iowa is right there with them. But despite the state having tremendous love for the game of basketball, the Hawkeyes have only ever made three Final Fours. Unlike a lot of schools here, Iowa hasn’t had a ton of recent success: they haven’t made a Sweet 16 since 1999.

No school has ever repeatedly come so close to a Final Four without ever actually making one. The Tigers have made it to the Elite Eight eight separate times, most recently in 2009 — and lost every single one of them. Eight seems to be the magic (cursed) number for them: they’ve been a top-four seed eight times, but have never fulfilled that promise. The ultimate heartbreak moment wasn’t even an Elite Eight game, but something far worse: in 2012, they became one of the only #2 seeds to ever lose to a #15 in the first round when they were upset by first-time NCAA tournament school Norfolk State 86-84.

MORE: The Biggest Winners & Losers from the 2022 NCAA Tournament